Thank you for going up the Usk River with us. 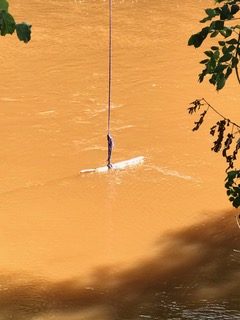 And - we are planning two legs over a weekend in September - date to be confirmed. First leg from Clytha to Abergavenny and second leg from Abergavenny to Crickhowell. We may camp in a friends field or you may want to book a B&B, or if you’re local you could go home to your bed . . . having had so many delays up to this point we feel that the river is calling us onwards more speedily now. We will let you know asap which weekend in September. 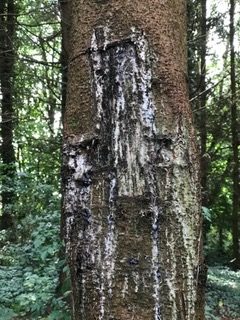 Once we began at Usk, we asked the river to show us codes following Mandy’s dream of the website codes / urls at the River Wye’s entrance into the Forest of Dean. As we were leaving the urban edge of Usk we found a rope swing with it’s stick/branch seat sitting on the river surface with it’s reflection creating a cross. We then continued and found 6 crosses in the path and then two ‘religious’ crosses carved in two trees, one sitting up and one sitting down. The trees are circular, of course (see further and things will become clearer). 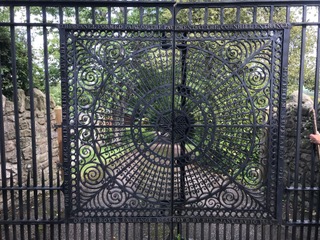 We continued and eventually came to a gate fashioned from an area of pavement originally from outside the Royal Exchange, burnt to the ground in 1838 (it has been burned down twice, the original burnt down in the Great Fire of London after having been built in Elizabeth I’s time). Another cross within a circle. Some odd Latin on the vertical which none of us could decode - interesting that the writing along the top and bottom (the horizontal) tells you what it is and the Latin is written on the vertical. 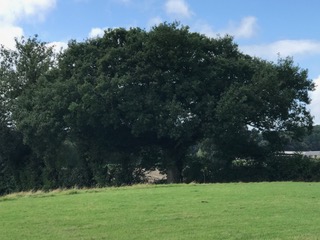 Lunch on the lovely hill preceded by an oak tree wider that it was tall (again referencing a cross in a circle). 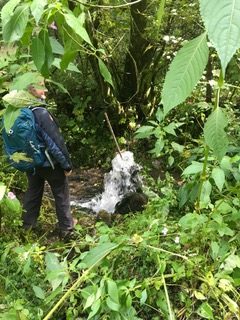 Followed by dropping down through Monkwood to the old pumping station. A man and his dog, the dog wouldn’t move and made his master tell us about the spring by the old Pumping Station which Jane was determined to find, and then found it. The offering of a gem near found near a geocache was spat out, as was an acorn.

We were then closer to the river and noticed young trees growing in the pasture, a lovely herd of cows with calves and sheep too. It was about here that Richard found lots of ‘restored crosses’ close to the Usk on the map. After tea/cider at the Chain Bridge pub we moved on.

We walked along under the edge of a wood and came to an old beech and oak that had become lovers, also with a cross. 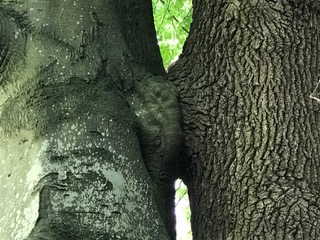 We were quite weary towards the end yet tuned into a great oak near the cars, going down it’s roots and under the river to join with a ‘restored cross’ on the other side. Whilst going to fetch cars four of us then visited this 'restored cross’ to find many celtic crosses - a cross in a circle.

On leaving Clytha Castle, Mandy and Juliet were greeted with a rainbow, a rainbow so close that it’s
feet were in the field next to the road. Then another rainbow a little further on - two rainbows make a circle and the cross in the middle is the river and land. Rainbows seem to feature a lot on this pilgrimage route.