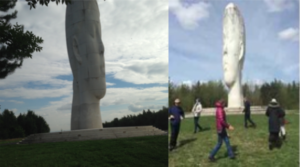 CELEBRATING THE SIGNS OF TAURUS (SUN) OPPOSITE SCORPIO (MOON) IN THE LANDSCAPE
‘Building a Good Dream’.

As we are linking from our own homes, we can read a little about the work of the local group in the Taurus section of British Landscape Zodiac and enjoy images of Helsby Hill below, with its ancient tracks and guardian trees. 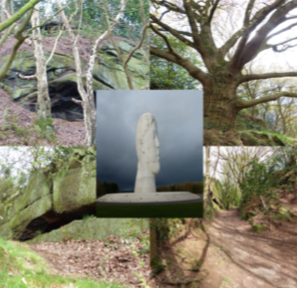 Helsby Hill – The pictures show the path up the hill, with rocks and Gatekeeper trees. ‘Dream’ the dreamer of the good dream is shown in the centre.

The group in the landscape of Taurus planned a walk to honour the ‘The Horn of the Bull’ – An exploration of the Iron Age Hill Fort of Helsby Hill, Frodsham, and the River Weaver confluence with the Mersey. It is possible that in the landscape cosmos, this area – the cusp of Taurus/Gemini in the British Zodiac – is represented by the star El Nath, the horn of the Bull. The cusp of Taurus/Gemini is on the AA line of the landscape zodiac of the British Isles, explored by Peter Dawkins and the Gatekeeper Trust, with the opposite end of the AA line being at the cusp of Sagittarius/Scorpio located in London. ‘El Nath’ represents the galactic anti-centre, facing away from our galaxy, i.e. the opposite to the galactic centre at the cusp of Sagittarius/Scorpio.

KEYNOTE: MEDITATION WHILE THE SUN IS IN TAURUS, WITH THE MOON OPPOSITE IN SCORPIO

The moon is in Scorpio ‘the magician/transformer/alchemist’, while the sun is in Taurus ‘the builder’. On our quest for understanding, we ask ‘how does our Scorpio moon reflect Taurus the builder. I suggest by creating personal intuitive insights about building friendships, building new forms of companionship through the arts that heal, transform and alchemise feelings collectively – like magic (Intuitive Scorpio). We reflect on how this is relevant to us today, and celebrate an emerging new spirit of love and compassion.

Please feel free to share your insights by sending to the secretary: secretary@gatekeeper.org

BACKGROUND NOTES ON PILGRIMAGES AND RESEARCH SO FAR:

Llangollen in Wales holds a significant place in the landscape equating to the Pleiades and is geographically near to the cusp of Aries and Taurus. The group of 7 hills to the North are called the 7 sisters, one of which is Dinas Bran.

‘Dream’ sits on the cusp of Taurus/Gemini in the zodiac, this is near Prescott, near to St Helens in Lancashire, at the Northern point of the AA line. The significance of this line is detailed in ‘The British Zodiac’ by Peter Dawkins (see link below). ‘Dream’ (a sculpture of a young girl’s head with eyes closed dreaming of a better future, set within Sutton Manor Park on the site of a now closed colliery) was the subject of a talk given to the Gatekeeper Trust Annual Conference 2018 by Mike Newton (see link below) showing its place and significance in the landscape as discovered by Peter and Sarah Dawkins. The ‘Dream’ sculpture faces directly down the AA line towards London. The nearby town of Prescott is the site of the exciting new ‘Shakespeare in the North’ college and playhouse, thus making a triangle with Stratford upon Avon and London. 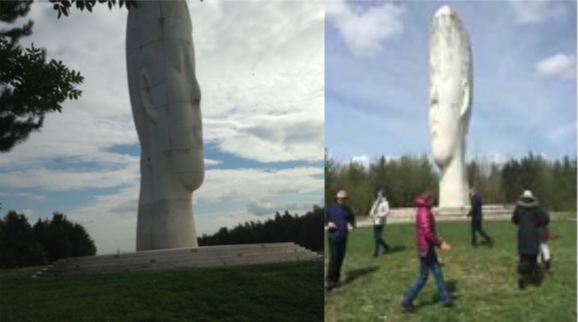 ‘From the Earth, comes Light’ – The pilgrimages during 2017-2019 travelled through the park with all its artistic sculptures created with the help of school children, and facing south towards London. It a beacon of hope in these times of corona.

It is speculated that the area around Macclesfield occurs on the cusp of Taurus and Gemini in the British landscape zodiac, therefore could equate with ‘Auriga’, The Charioteer, also associated with ‘Ariadne’ the Spinner of the Silver Thread, in the constellation of Arachne. Auriga is the complementary 13th sign, in the lunar zodiac, to Ophiacus (See ‘The British Landscape Zodiac’ by Peter Dawkins, linked below). This area was to be the subject of this year’s Taurus Pilgrimage.

Peter Dawkins’ study, pilgrimage and research over many years into the myths of Britain as they are represented in the landscape down history, in this area, brought together an interpretation of his own intuitive insights as follows:

“The Pleiades mark the throat/head alt-major chakra of the Bull. They signify the goddess who sits on the neck of the god, Zeus, the Bull or Alpha. They are the Seven Sisters, led by the star/goddess Maia, who in some traditions was once considered to be all the Pleiades collected together as one star representative of the Divine Mother, Maia or Mary (meaning ‘Mother’). This is clearly the reason why the Castle of Bran at Llangollen was known as the Grail Castle, famous for King Bran (or Bron), the first Grail king or guardian of the Grail who married Enygeus, Joseph of Arimathea’s daughter, who represented the Holy Grail (holy bloodline). The Grail also refers to the land or kingdom, which was/is Britain, in which the wisdom is imprinted as represented by the British landscape Zodiac. This was the first primary marker in the landscape that enabled me to work out where the ecliptic circle of the landscape zodiac is (i.e. how far from the centre at High Cross, and how the zodiac signs are laid out within the circle).

Enygeus is sometimes referred to as Joseph of Arimathea’s sister rather than his daughter, but this is certainly questionable. Joseph is recorded as having a daughter called Anna, who married Arviragus (Gweirydd). Anna was adopted by the Roman Emperor Claudius I and given the name Genuissa. However, the name Enygeus is a Latin form of Anna. Enygeus married Bron/Bran Fendigaid (‘the Blessed’) and he was almost certainly the high king (Arviragus, a Latinised form of the Celtic title ard rig, meaning ‘high king’) known as Gweirydd. Bron/Bran would have been Gweirydd’s god-name that he adopted as high king, being considered (as kings were) to be an incarnation of the great god Bran. This would also account for why Anna would have been suitable for adoption by the Roman Emperor Claudius, as a mark of respect and honour to seal the peace treaty that was made between the Romans and the Britons.”

Liverpool sits where the River Mersey flows into the Irish Sea, a river which via the Manchester Ship Canal was known as the Gateway to the World. This waterway brought cotton into the country and salt out to the world. The salt towns of Cheshire are another area we have yet to explore, salt has a cubic crystalline structure and is the foundation of the seas and our bodily fluids so therefore we think it is of significance (a member of the group intuited that the canal system in this area forms the Cheshire Ring and hence a silver wheel of water and movement making a link with Ariadne).

The group has not explored Chester yet but it is expected that there is much to be found. Shugborough, Castle Rings and Lichfield are also in the Taurus area (see link below for more details) Lichfield and nearby Cannock Chase is equated to the North Pole Star, Arcas.

With thanks to the following who were instrumental in generating pilgrimage reflections, putting this article together and editing: Peter and Sarah Dawkins, Vivienne Newton, Mike Newton, Amelia Coe, Charlotte Yonge, Jane Lewis and Jane Withers.

‘The British Landscape Zodiac’ a pdf by Peter Dawkins (https://www.fbrt.org.uk/pages/essays/The_British_Landscape_Zodiac.pdf)

‘From the Earth Comes Light’ talk by Mike Newton at a Gatekeeper annual conference. (https://gatekeeper.org.uk/videos)