The Gatekeeper Trust Avebury Pilgrims’ Day on 11th September 2021 turned out to be an alchemical experience, full of stories, insights and synchronicity. The ancient song lines embedded in the land and in the underground waters emerged as pilgrims explored together the convergence of the Avon and Kennet rivers in this unique chalk landscape. Gathering together 24 Gatekeepers, also emerging from a period of quiet reflection imposed by lockdown, it was an energising reboot to be back in service to the land and in company of each other. It appears this was the right time for this immersive pilgrimage and the right place after several previous attempts to bring this vision into being.

The theme was originally inspired by the research of Anthony Thorley and Charlotte Yonge revealing a grail cup in the Wessex landscape. The cup rim runs along the River Kennet from Avebury in the West to Marlborough in the East and comes together at Amesbury where the River Avon descends the stem to Old Sarum, Salisbury, Christchurch and out to The Solent at Hengistbury Head. The river network drains the chalkland in a similar shape. 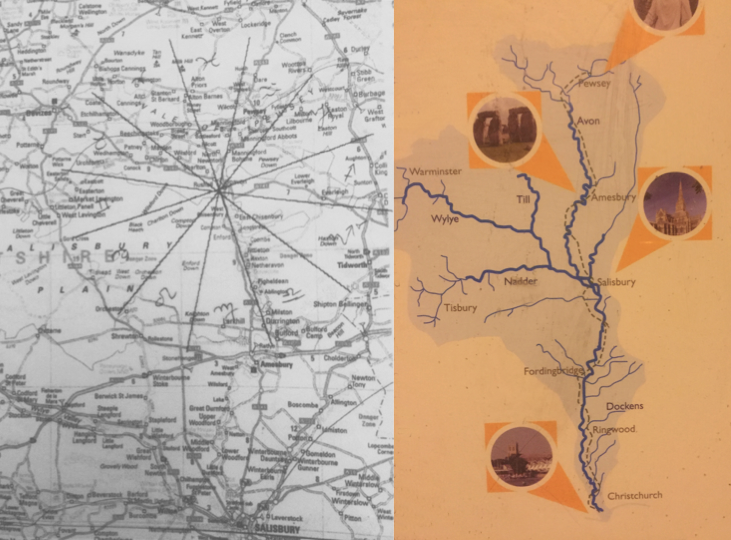 Charlotte Yonge in her presentation took participants virtually down this route, starting with the point of balance at the centre of the Grail at Scales Bridge, Upavon. She had gathered water from The Avon at Scales Bridge which was used in the closing ceremony of the day. Her years of experience both in the land and in academic research into the sacred sites within her home landscape shone through and were a great introductory overview.

Angela Shaw looked at the broader perspective, how the rivers flowed West-East from coast to coast (Kennet) and North-South (Avon), discovering at Morgan’s Hill to the west of Avebury the hydrological Triple Divide of Great Britain where rainfall drains into 3 different seas The English Channel, via the River Avon, The Atlantic Ocean via the Bristol Avon and Severn Estuary, and the North Sea via the Kennet and Thames.

Angela also focused on Marlborough on the eastern rim of the cup, as a counterbalance to Avebury. The Michael line passes through Merlin’s Mound here, contemporary to Silbury Hill where the feminine Mary energy flows. Marlborough has a central place in the overlapping lens Vesica Piscis of David Furlong’s double Marlborough Downs circles with links to Eygpt (Great Pyramid at Giza) and the Templars. When this convergence is added to the grail map, a head with bursting crown appears.

Gail Smalley introduced her personal way of honouring the River Avon through sound healing and water blessing. Gently singing her Aramaic prayer draws the waters and animals to her, including fish, swans and white doves as witnessed on a joint pilgrimage down the lower Avon. In return, the river shares songs with Gail, one of which she passed on to those present accompanied by her singing bowl. Gail took attendees down the stem of the Grail from Old Sarum to Hengistbury Head, revealing her own experiences with Salisbury and the waters that converge there.

Waters from the Rivers Kennet and Avon were brought together in Gail’s singing bowl at the end of the day, as convergence of the two rivers and of the experiences and energies of all participants. The water was later offered to the Cove’s grandmother stone in the Avebury Moon circle to ceremonially complete the day, perhaps re-enchanting the land.

Maria Wheatley gave an inspiring talk on the yin and yang waters of Avebury, describing the combined male and female energies as Genesis water. Her geodetic dowsing and intimate knowledge of the landscape have revealed healing energy spirals in the Sun Circle of standing stones and the tidal influence of the Moon on the deep aquifers beneath the chalk. Unlike many dowsers who use dowsing to measure, Maria seeks instead a loving communication with the land and a deep understanding.

Her books are available via The Henge Shop or https://theaveburyexperience.co.uk as are her dowsing tours and workshops. Her latest discoveries focus on the elongated skull people and the Bronze Age King of Avebury and Queen of Stonehenge.

After a break for lunch, pilgrims were able to follow Maria into the Avebury landscape and experience these phenomena for themselves. They were drawn to lie down in a couple of places to absorb the energies and learnings from the land. This time of connection was much enjoyed. Pilgrims returned to the Sports & Social Club for a final questions and answers opportunity about the day and future events. It was agreed more day events would be most welcome next year. The Trust was delighted to be meeting with its friends again.

Much gratitude to my fellow trustees for bringing this convergence into being and sharing their gifts and knowledge with those assembled. Stephen Thomas was a wonderful host – thanks for his warm welcome to Avebury and for guiding us skillfully throughout the day.