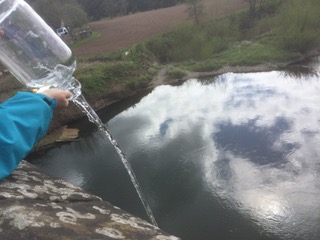 This July there is a pilgrimage along the River Wye. People are walking the length of the river from source to sea as a spiritual act and as an awareness raising act . . . raising awareness of how we are killing the river with our polluting culture.

As you read this the pilgrimage is already under way. It is being walked in sections mainly by those local to each section carrying water from the source to the sea with ceremonies and events along the way. I will be leading the section from Kerne Bridge to Lydbrook, crossing from Herefordshire into Gloucestershire, from the plains into a steeply wooded landscape on Sunday 25th July.

Kerne Bridge has an interesting name. There is a British Goddess named Ker who is celebrated at Lammas and the word ‘ker’ or ‘kernel’ relates to corn. We have celebrated Lammas at this point in the past, making kernababies more commonly referred to as corn dollies, picnicking on the banks and floating our wishes down the river in little paper boats.

Some water from the source of the Wye at Plynlimon is being carried the length of the river and it will be handed to me on 24th July from the Ross to Kerne Bridge pilgrims at the time of the Full Moon in Aquarius, this sign being the Water Bearer. How fitting is that! On the next day we will process down to Lydbrook and meet with an event there . . . by this point the pilgrimage will be about two thirds to three quarters of the way along the Wye. If we take the start of the year as January then July/August is about the same length of time through the year too. 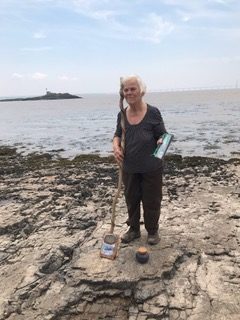 Much of the Wye flows through the Pisces segment of the zodiac. We physically began the whole thing on 1st July when a group of us met at Sedbury under the old Severn Bridge to collect some water from the Wye ‘delta’, as near as we could safely get to where the Wye meets the Severn. This water was to be offered to the source of the Wye at Plynlimon at the opening ceremony in some jars made specially for that purpose. Two creative books and a staff were also present, all locally crafted.

Photo of Mollie Meager, who inspired the pilgrimage, at the Wye delta with Staff and books.

Back in April, at the time of Aries (the sign in which the Rivers Wye and Severn begin) we met at Kerne Bridge to start the whole thing off spiritually. Following a dream and various other synchronicities, we took some spring water gathered from St Anthony’s Well, a famous sacred well in the Forest of Dean, and some gold leaf and offered it to the River Wye from the middle of Kerne Bridge itself. We poured half into the upstream side and half into the downstream side and then a piece of gold leaf which fluttered out of sight. Then it suddenly appeared again and gleamed like gold floating on Mercury.

The River Wye meets the River Severn in the Aquarius section of the zodiac . . . it has all tied in very nicely! And like the sea water, I have written this backwards, like walking upstream with the sea water . . .

If you want to join any of the remaining sections of this pilgrimage you can find when each section is being walked on this link - https://www.fouw.org.uk/walking-with-the-wye

Mandy Pullen
Local Contact for Forest of Dean and Monmouthshire