With Mandy Pullen and Jane Embleton

Latest legs from Clytha to Abergavenny on Saturday 12th and from Abergavenny to Glanusk (a park where the Green Man Festival is held, usually) on Sunday 13th September 2020.

Following our last pilgrimage along the River Usk back in August where Mandy had a dream about the day involving codes, we asked for dreams again the night before the Saturday. This time Jane had a dream about rivers running higher than a road, like aqueducts, on the ‘levels’. Jane was driving along on the road with her partner slowly following a party of Black Watch soldiers. There was a large toad in a hole in the road and also a crab on the road. 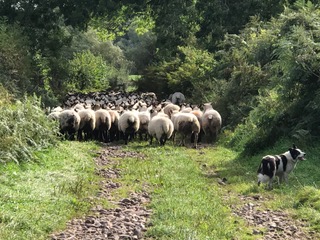 After the usual car shuffling we arrived at the Church of St Mary the Virgin at Llanfair Kilgeddin. On the way we were stopped by a roadblock as sheep were being moved from a farm yard to a field. When we arrived at the Church the sheep were then being herded down the neighbouring green lane and created a bottleneck (more on this later as it was a bit of an omen). Then two of the party of six walkers rang to ask where we were. They had inadvertently gone to the tree that we had tuned into at the end of the last leg on the other side of the river. We had felt that perhaps we should have at least returned to the tree ourselves so as these two had inadvertently that was a good start.

We spent some time in the Church yard where we found a lantern in front of a grave with a fine Tennyson quote - “To strive, to seek, to find, and not to yield”. We borrowed the candle in order to tune in at the restored cross which had become apparent on the last leg. As we were investigating Mandy decided to ‘plant’ a feather in the centre of an old tree trunk near the cross and as she approached, promptly fell down an invisible deep hole (up to her knee). This caused much hilarity but then Jane also fell down another on the other side which caused even more! Jane’s dream of a toad in a hole felt fitting. We realised that the tree was calling us from the other side of the river so we tuned in to the river via the tree trunk instead of the cross, borrowing the lantern from the Tennyson grave. 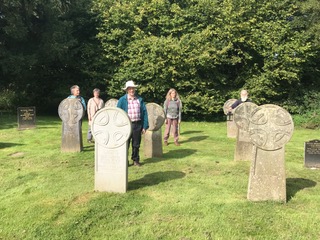 Moving on we crossed the first bridge and stepped down to the river below to find . . . a frog (as near to a toad as you can get) and another bottleneck in the bridge, holes to allow flood water though. 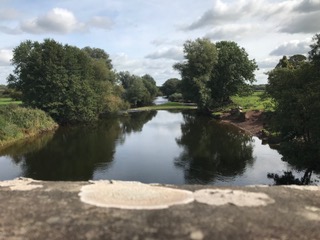 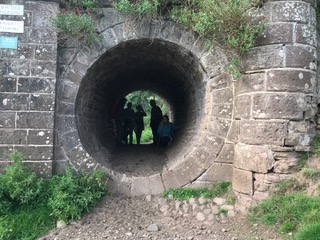 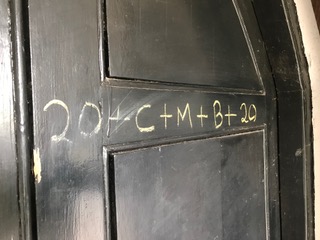 Later, we came to a church at Llangatock which had a strange code on the door. We were seriously perplexed until we found an explanation - Chalking the Door: an Epiphany Tradition. In the photo the 20s refer to 2020 and C, M and B to the three wise men, Caspar, Melchior and Balthasar. It asks for blessing for the coming year for Church or home, at Epiphany, the twelfth night of Christmas. Epiphany is a Christian feast day which celebrates Jesus Christ being the incarnation of the revelation of God and celebrates the visit of the Magi to
the Christ Child. In Eco Shamanism we can celebrate it as the revelation that all people are spirit incarnate, particularly when we visit our souls outside of ourselves in the form of rivers and trees as physical manifestations of spirit. This is particularly significant to both Mandy and Jane as they are running a Twelve Days of Christmas online event later this year . . . and the following day we had twelve pilgrims. 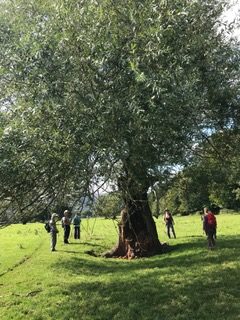 There were many very BEAUTIFUL and LOVELY trees on both days - here a very old willow. The theme of beautiful and lovely trees began to establish itself . . . each one we came upon we chanted,
very loudly, ‘What a beautiful / lovely tree’.

We eventually came to the Brecon and Monmouthshire canal. The Usk River isn’t easy to walk along in terms of footpaths so we had decided to use some of the Usk Valley way which follows some of the canal. It was peaceful and shaded on both days too. In Jane’s dream this canal was obviously referenced in the river/ water being higher than the road and more so the following day when there was literally a busy road below. We came to another very beautiful tree, this time an oak that we measured with our bodies and decided it must be at least 2020 years old. 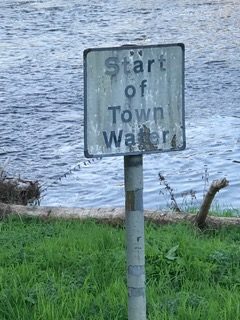 Start of Town Water at Abergavenny

We crossed again at Abergavenny where the Start of Town Water was signed.

We had decided to stay at Llanwenarth Inn on the river, a little beyond Abergavenny. As we approached we become ensnarled in brambles trying to get through a steep and dangerous bank up to the road after having quarrelled about whether to go that way or follow the path. It was almost impossible to unplug the way but four hardy souls pushed through and climbed over the fence at the top. Two others retreated and took the signposted path and walked along the road. This was a literal bottleneck and highlights the nature of clearing energy during pilgrimage work - we argued at this point which is unusual on a pilgrimage and we had omens at the start of the walk with the sheep and bridge bottlenecks.

The Inn was sandwiched between the road and the river and there was no access to the river from the Inn, it felt as if there was a blockage in spirit, the people not caring that the river needed some, even a little, attention despite the river being used as a selling point . . . The Inn itself was in a state of unease which was obvious with a blocked toilet, a shower that didn’t work, a mis-sold room, a mis-leading postcode and a breakfast shambles the following day. We found out that it had changed hands on several occasions in the past few months. Maybe our pushing through of the

brambles at that point will help but we feel that if the owners cleared a way to the river and honoured it’s presence they may have more luck with it . . .

We asked for another dream that night. This time it was Mandy who had a dream - a sage green 6 inch cube herbal book with a black binding written by a herbalist colleague that cost £167 . . .

Our party doubled in size and so we were twelve - being joined by someone who had trained with the herbalist colleague! We decided to meet at a bridge a little way along from the river. We found that it was closed to cars and this, at first, scuppered our car plans but turned out to be a gift and we started there. Mandy walked from the Inn to this bridge solo so that she didn’t miss it in the car ferrying and found an empty uncorked wine bottle at the bridge - a sure sign that the clearing of the bottleneck the day before had been successful. 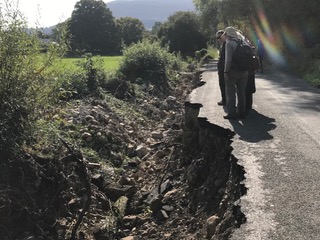 Washed away road - the power of water

It was soon apparent why the road was closed to cars as we walked on - a lot of the road had been washed away by the previous winters flooding in that area.

We trundled up the hill to the canal and had to eat some lovely flapjacks from one of the pilgrims then we taught the new pilgrims the tree chant. At the end of the canal we tumbled down the hill to Crickhowell for lunch at the Dragon Inn. There were a few more ghost bottlenecks within the Inn . . .

Then along the river which kept inviting us in until we gave in. Some of us got a little wet. 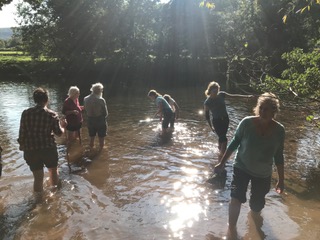 Getting in the river

And we walked barefoot for a lot of the rest of the pilgrimage and finally tuned in and sang to the sparkling river under a very lovely and beautiful oak as a Kingfisher flashed by. The song was brought by one of the elders (sage green from Mandy’s dream seems to refer to the wisdom of the lovely trees we encountered and the elders amongst the pilgrims) of the company and so the busking pilgrims now have a name - the Uskers. We plan to continue this tradition of singing to/with the river but next time we will lay a hat on the ground and see how it fills with spirit coins.

Going up to the road where our cars were parked we came across a Black Watch style cube with the number of the box being 161 - £167 was the price of the cubed and sage green herbal that Mandy had dreamed when at the Inn. This seemed to synchronise Jane’s and Mandy’s dreams. On reflection it occurs to us that the dream Mandy was given on the previous leg in August was all about codes and crosses. During this weekend we visited two churches, cross shapes, one having a restored cross in it’s Church yard and another holding a code in the form of ‘Chalking the Door’. And then a cube shaped AA box referencing the Black Watch soldiers and the herbal book.

For some reason as I was writing this last paragraph AA struck me - it is contained within a circle in the photo. This led me on to Alpha and Omega - also known as the Christ Star (North Pole Star), again referencing the code from the Chalking the Door. And here I reference another elder, Peter Dawkins, and his writings that brought my attention to this and the Double AA phenomena. To quote Peter, " The Double-A (‘AA’), however, has an even more profound or additional meaning, one of which is Alpha-Omega, or Creation-Revelation, where the end result is the perfect revelation or image of the beginning." If you are interested in following this up you can read Peter’s account of the Double AA here - https://www.fbrt.org.uk/wp-content/uploads/2020/06/The_Secret_Signature.pdf

Finally the synchronicity of the Tennyson grave stone at the beginning of the pilgrimage looking so similar to the AA box at the end . . . both having smaller box shapes at their base. We are pilgrims following in the footsteps of wise (sage) elders, in both human and plant form, being led by the spirit of a river and possibly being shown the hidden truths of the universe. It is sacred (as in the word secret) work. 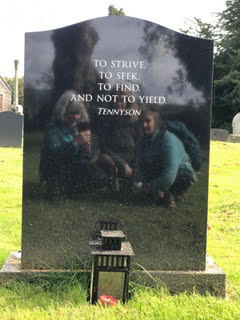 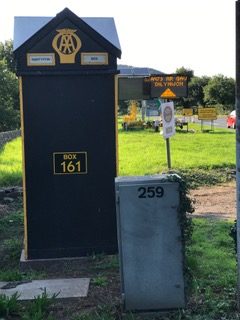 Gravestone and Black Watch Box - same shape both with smaller boxes at their base.