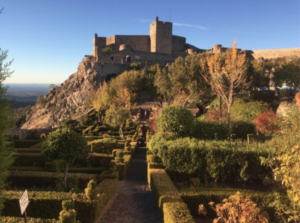 “Through the face is revealed the beauty of the heart”

A Grail Pilgrimage within the ‘Face’ of Europe – a magical landscape temple in Portugal that stretches up the eastern side of Portugal, from Castro Marim in the south to Braganca in the north. We will visit a series of important sites—beautiful landscapes and great buildings in special locations.

We are making this journey as a pilgrimage, in the sense of honouring the places by greeting, appreciating and enjoying them, their people and each other. We have two principles which we endeavour as a group to fulfil, which are to make the effort to love who we are with, wherever we are and whatever we are doing, and to do the right thing in the right place, at the right time, with the right intention. In this way we can enhance the places and the whole landscape temple, enthusing it with love and thereby helping to transform the energies into an ethereal fountain of light. In such ways, we help to build the light body of the planet.

Costs exclude flights and transport to Casa Fuzetta and from hotels in Porto (should you decide to stay on after the pilgrimage). Lunches in Monsaraz, Guarda, and Braganca are excluded. Minibars, hotel pay TV, laundry, hotel phone, and all drinks are at your own cost.

Europe takes its name from the classical myth of Europa and the Bull, and mainland Europe can indeed be seen imaginatively as a ‘bull’ with the British Isles seated on its neck as ‘Europa’. Spain is the ‘head of the bull’ and, as such, Portugal forms the ‘face of the bull’. Sintra, which is just north of Lisbon, has been known as ‘the Nose of Europe’ for centuries.

We (Peter and Sarah, Jonathan and Tara) have discovered a sequence of major landscape chakras (centres of energy) rising up the eastern border of Portugal. Seemingly much of this was understood and marked by the Knights Templar, who started working in Portugal from 1111 AD, seven years before the Templars were officially recognised by the Roman Catholic Church.

St Bernard of Clairvaux established the Knights Templar and Cistercian Monks to represent the Twin Pillars of tradition, working together in Portugal with the stated intention of creating “Heaven on Earth”. An esoteric name of the country, as displayed on the royal seal of Portugal’s first king, Afonso Henriques, is Portugral, meaning “Through you the Grail”.

Many of the sites we will visit are associated with the Knights Templar/ Order of Christ, including their temporary headquarters in Castro Marim and various hilltop Templar castles and keeps including at Monsaraz, Estremoz, Marvao and Monsanto. As well as visiting and experiencing the landscape chakra locations and many of their special buildings, we will also discuss the vital role the Knights Templar played in the creation and development of Portugal.

The root point of this landscape temple is a 12th century templar castle with an ‘inner’ cube shaped castle. This overlooks the estuary of the Guadiana river leading to the Atlantic Ocean. It is understood that this is where Prince Henry the Navigator, as Governor of the Algarve and Grand Master of the Order of Christ, devised his plans for his famous School of Navigation.