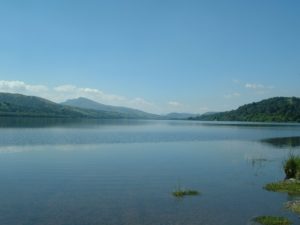 ARIES: Lake Bala, Wales – a breath-taking view of the mythical place of birth for Taliesin,’the was a renowned bard. who is believed to have sung at the courts of at least three kings.’ He was a mediator of dreams and pioneer of wisdom. [By Mecrothesp at the English-language Wikipedia, CC BY-SA 3.0, https://commons.wikimedia.org/w/index.php?curid=10513322] 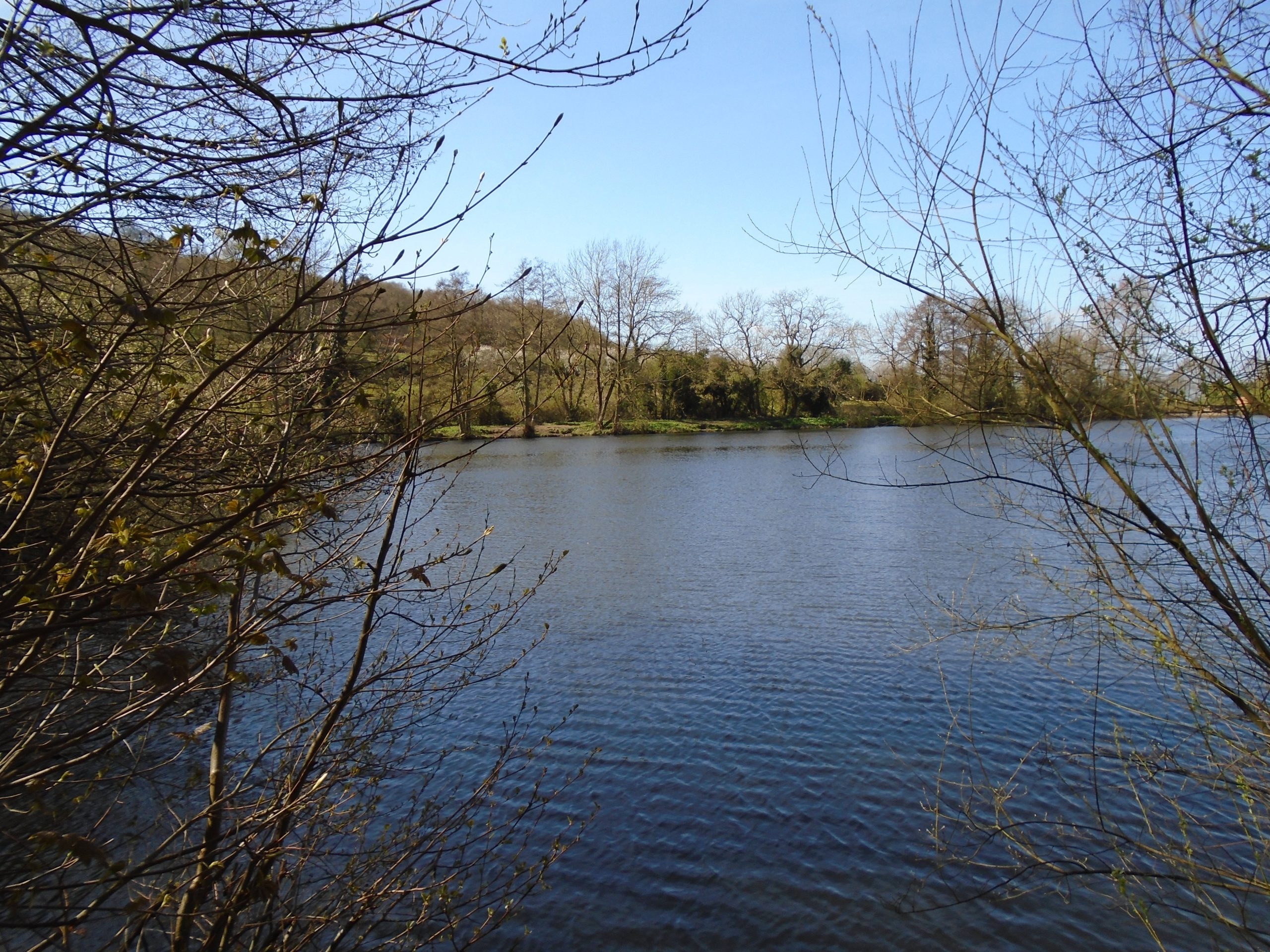 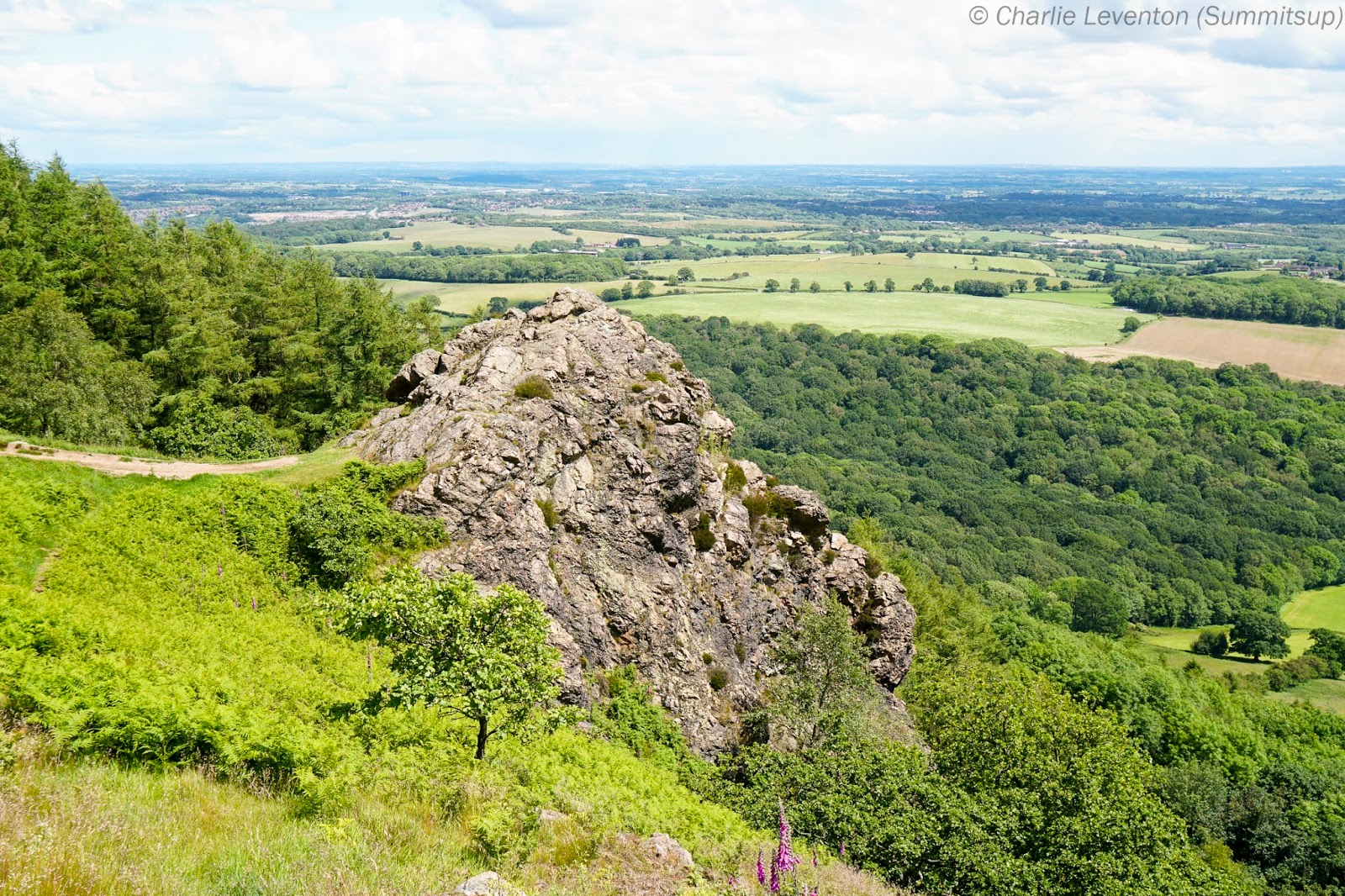 The Needles Eye, and the Raven’s Bowl, on Wrekin’s northwest facing slope of the hill [Copyright Charlie Leventon (Summitsup)] 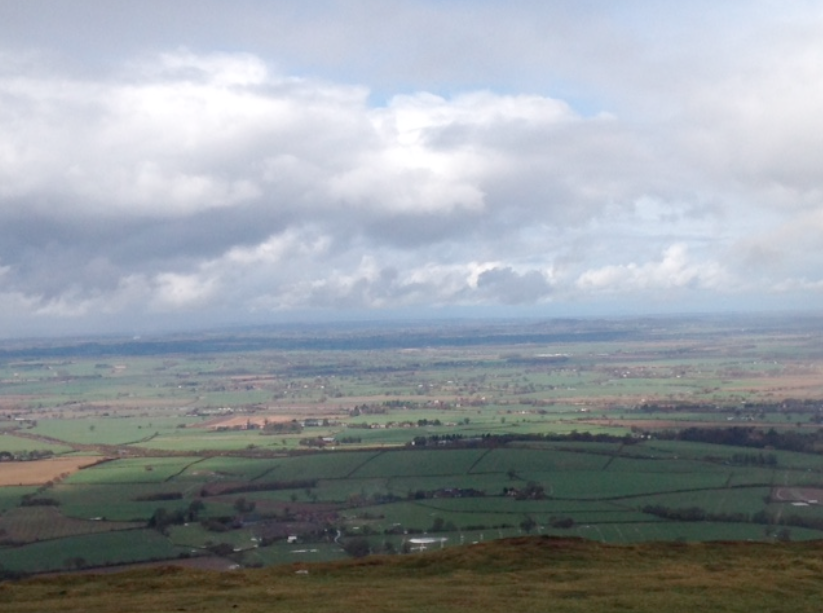 View to Snowdon ‘the unknowable horizon’ from the Needle’s Eye and ‘the Raven’s Bowl’ of the Cornovii. [photo by Jackie Knight 2018]. 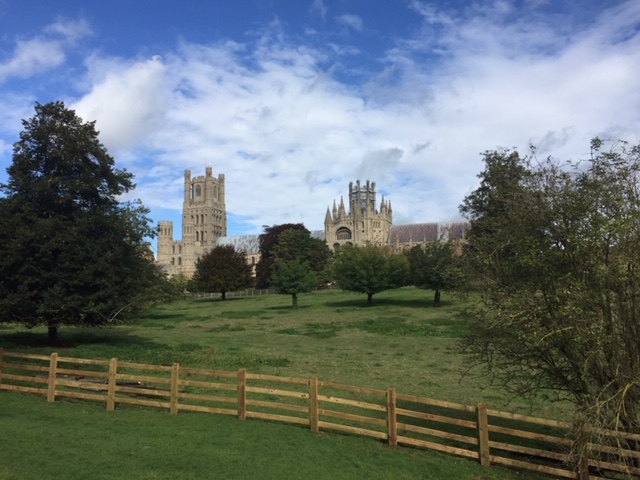 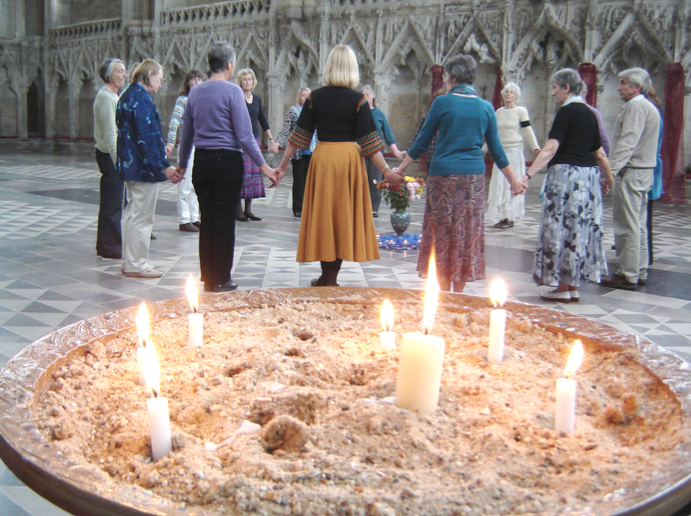 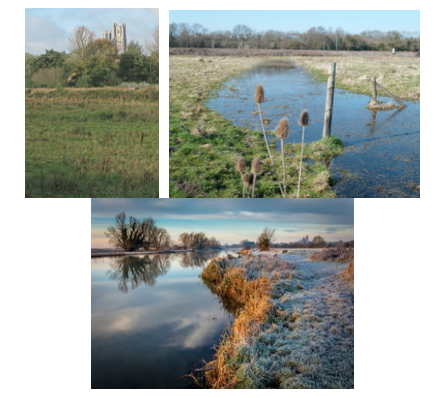 The waters of the River Great Ouse spilling over onto this flood plain. Springhead Lane near the cathedral called after the line of fresh water springs on which watercress beds were installed.

The sacred ‘cauldron’ lakes and pools of North Wales and Norfolk.

As we look at the cusping moon, we consider the dislocation of time and precision which our conscious mind loves to process, and leap out of time into an intuitive, poetic self impassioned by the spirit of truth and love.

The moon in Aries symbolises our inner warrior/pioneer, and the sun in Libra symbolises our inner ‘mediator/diplomat’. Our quest is ‘How can we build a role as mediator or diplomat through trusting and activating our pioneering passion of purpose, the innovative spirit of love and truth?’ Is being a ‘pure poet’ of wisdom and truth the goal for our Libra inspiration and quest?

LIBRA SUN – its radiant inspiration for poetic mediation between us and nature, acts out in pilgrimage. The following is a report from the Libra landscape, where Anam Cora, a group of singers lead by musician Caroline Weatherby, experienced the poetic magic of sunset light pouring into Barsham church as they sang.

The Libran landscape - report from the pilgrim poets of Libra, lead by singer Caroline McCausland, 2017:

We had an exceptional "Wheel of Life" day on the Equinox last Friday 22nd September. The sun shone on us as we walked along the Angels’ Way in Beccles from St Michaels Church and along the river Waveney for about 2 miles, stopping to sing and to check where we were on the Michael line.

Then after a break for refreshments, we went to the Church of the Hoy Trinity in Barsham for a sung meditation with Anam Cora, and to see the famous Equinox Illumination, when the sun comes through a tiny window in the back of the church and lights up figures on the rood screen for approximately 15 minutes.

Inside the church we had no idea if the sun was still shining, but at the appointed moment the singing stopped. As we sat and waited, for what seemed like several minutes, suddenly a golden glow came over the figure of Mary on the rood screen! Starting on her right side and moving to her heart and head. It got stronger and stronger, till it lit up the figure of Jesus to her left, and through the screen to a gold cross on the alter behind. Then it very gradually moved away. We couldn't have asked for a more spectacular "showing". It was very moving. The singing began again gently with "Adoramus te O Christe" in parts and we ended with everyone singing together, a Russian Peace chant and ‘Sine Alelu’ from Ireland.
[http://gatekeeper.org.uk/events/libra]. (Photos from Caroline Weatherby) 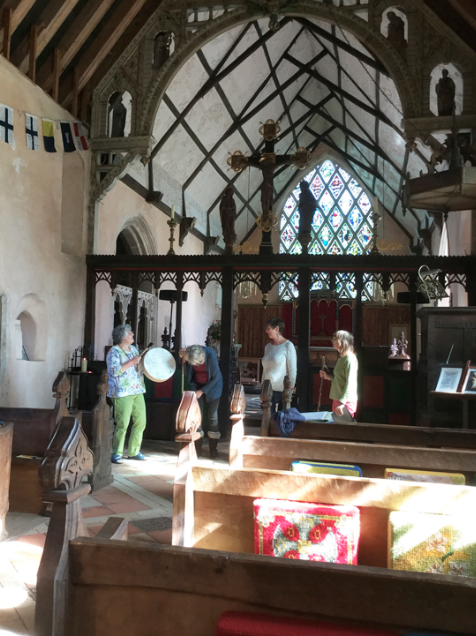 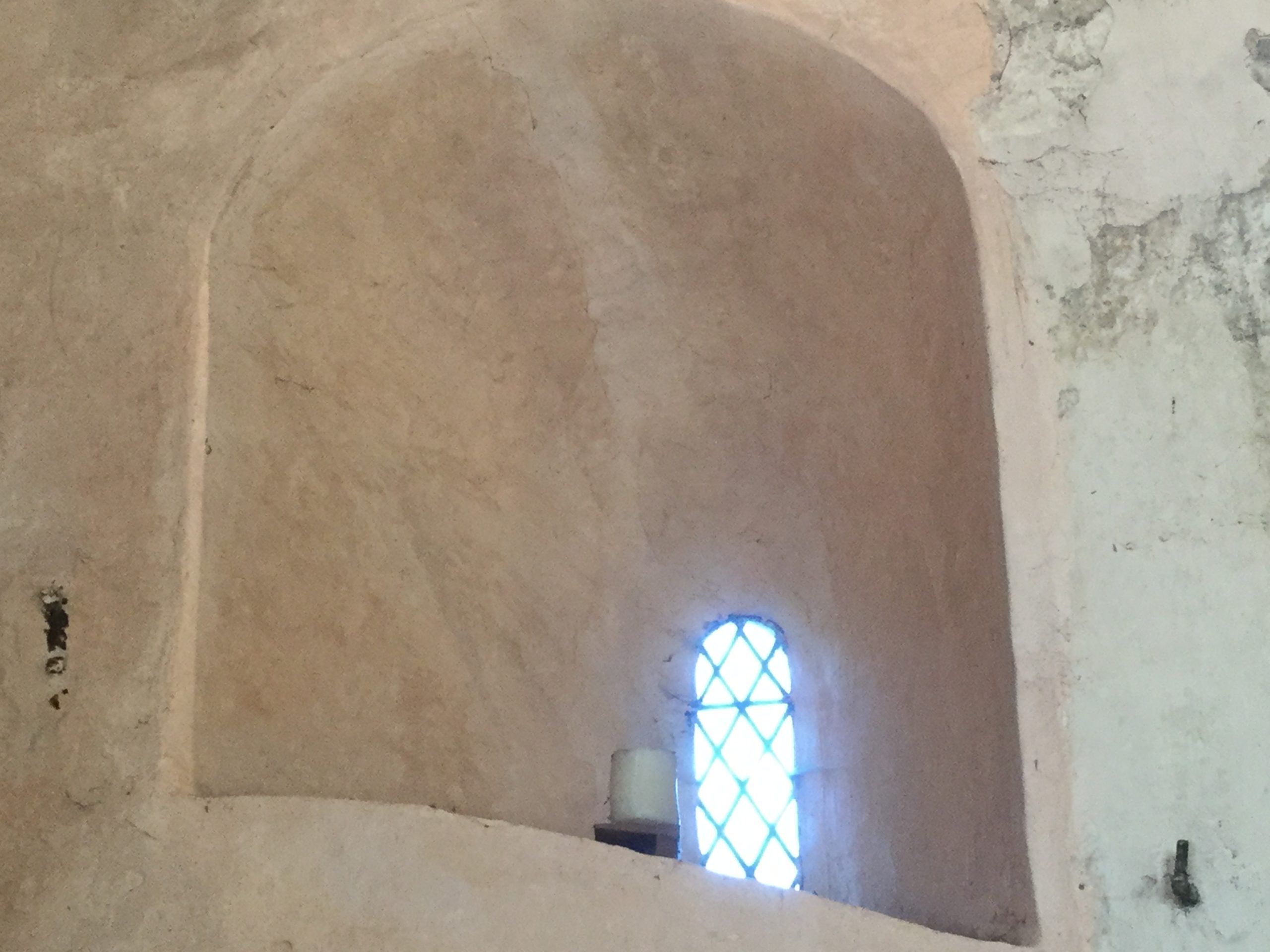 The tiny window through which the sun shone, setting alight Mary and Christ.

The window at Barsham Church lit the font and the figures of Mary and the Christ: the pioneers of unconditional love at the start of the Age of Pisces. 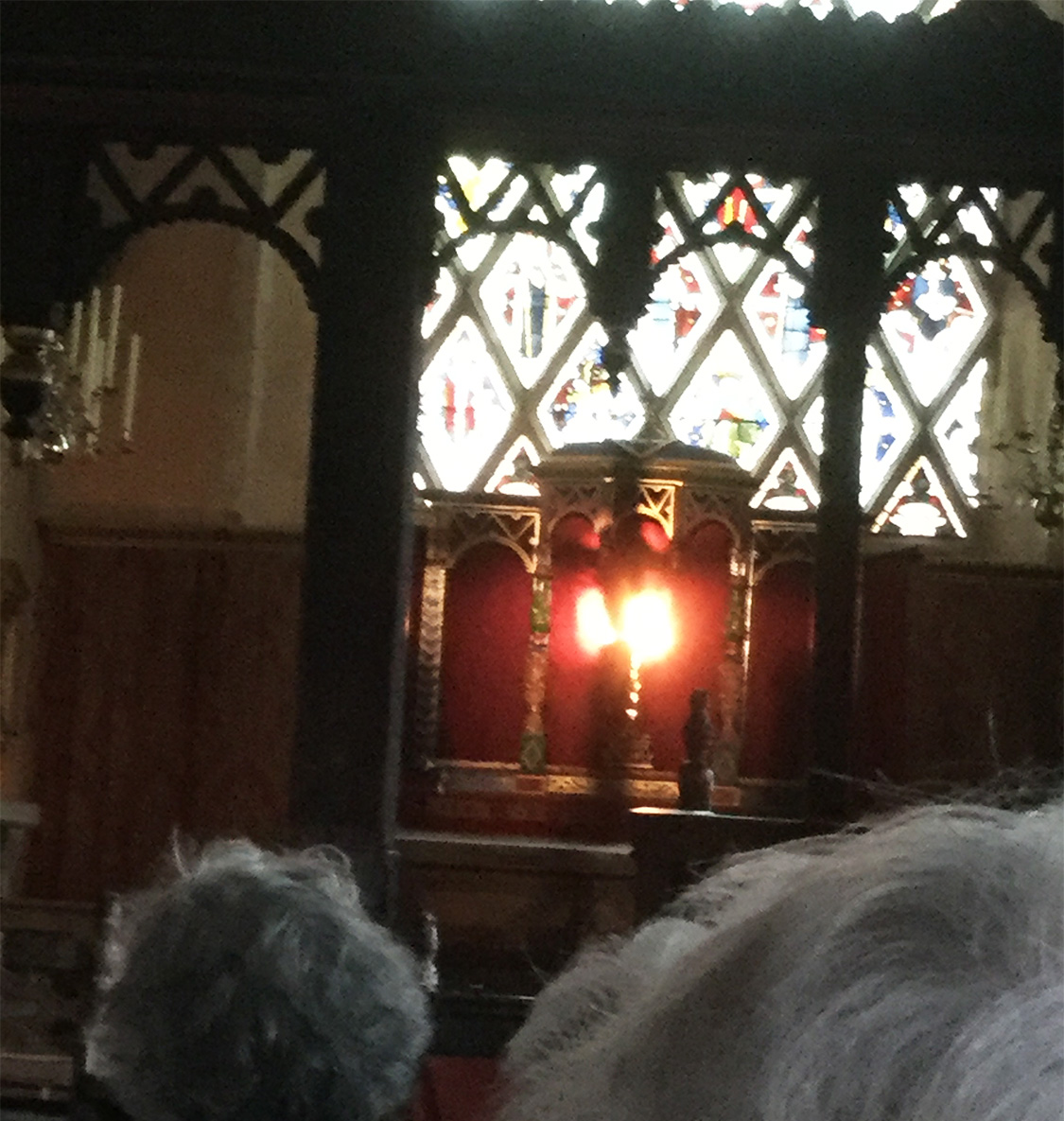 We are indebted to Caroline for the many years that she and her merry band of pilgrims have been pilgrimaging in East Anglia, maintaining a steady rhythm of celebrating each equinox and solstice festivals.

Inspired, we now travel to Wales, to connect with the moon and the magic of pioneering into the unknown.

Aries landscape: symbolising the ‘focus’ of Mars in Aries, indicating dedication to a passion of purpose and spiritual goal. [Wiki] ‘...its symbolism is complex. As a talking bird, the raven also represents prophecy and insight. Ravens in stories often act as psychopomps, connecting the material world with the world of spirits.’ Ravens feature in the story of Bran the Blessed whose head and ravens rest at the Tower of London having travelled from Ireland. [https://www.coursehero.com/lit/The-Raven/symbols]

The Wrekin, stronghold of the Cornovii, whose name seems to relate to the Latin name for ‘raven’, and who were referred to as the ‘people of the horn’. ‘In Norse Mythology, the two ravens that served Odin, the father of the Nordic gods, were called Thought and Memory. ... the raven also symbolizes the unconscious or the unknowable.’ https://www.coursehero.com/lit/The-Raven/symbols/

Peter Dawkins [www.zoence.co.uk]asks us to reflect on the myth of Ceridwen: ‘The myth recounts how each year Ceridwen makes a magical brew in her cauldron, to drink which can bestow enlightenment and immortality. It takes a year to prepare and brew. During the year the goddess collects various herbs and flowers and other special things from nature, at appropriate times of the day, week or month, which she gradually adds to the brew. But the brew has to be stirred, heated and kept at just the right temperature. To help her do all this, the goddess has nine maidens in attendance, and each one in succession is responsible during a 40-day period of the year for stirring the brew and, on the 40th day, breathing on the fire beneath the cauldron, to keep the fire burning and the temperature just right. The three witches of the Shakespeare play Macbeth represent the nine maidens, with each witch composed of three maidens. (In another way, the three witches also represent the three modes of the Triple Goddess – i.e. maiden, mother, crone.

In answer, I here are some questing points to ponder:

* How can we ‘stir Ceridwen’s cauldron and find our ‘passion of purpose’ and dedication, the test of love that leads to awakening our inner warrior/pioneer and mystical self (Mars governs Aries the pioneer, the moon governs Pisces the mystic).

* Is ‘stirring Ceridwen's cauldron’ connected to the sacral chakra, the seat of creative power and passion of purpose, when linked to heart vision and spiritual awakening?

* Cauldrons, lakes and ravens have a common meaning in referring to the pioneering spiritual impulse to understand the unconscious life within us.

* We are creative mediators, daring pioneers of poetical interpretations of our world and our relationships as we journey through our unconscious to ever higher conscious states.