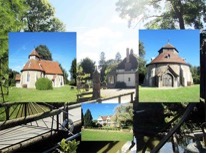 A photo montage – the cusp of built and natural environments: Little Maplestead Templar round church honoured the sacred sites in the landscape surrounding it.

In Scorpio we find a key to the symbolism of heaven on earth: the round sanctuary that serves to incarnate the angelic presence of sacred landscape. This is a symbol of alchemy, where architecture shapes the sacred energies generated through love in action and devotion to the eternal Truth of Divine Love.

The cusp of Scorpio and Sagittarius in the South East, and the cusp of Taurus and Gemini in the North West forms an axis line between the two distinctive landscapes around London and Manchester. It is along this axis that the Milky Way of the star map of the British Zodiac spirals, and in pinpointing the two opposite cities in meditation we can form a sort of symbolic bow and arrow. The bow is pulled to make the ‘string’ (axis) taught ready to shoot an arrow.

In this times of radical change, different regions of Britain are being identified for the application of a 3-tier COVID regulation system, which triggers rethinking of the evidence. The people of Manchester (in the landscape of Taurus) are embodying a new impulse into how we might develop local self-management of these regulations, and expressing the will of the local population. There is a chance of true scientific reflection on evidence so far, which is the outcome of ‘testing experience’ for wisdom, the theme of Scorpio.

The Sun in SCORPIO gives us a symbol for transformation through tried and tested experience:

“Warrior I am and from the battle I emerge triumphant.’ Scorpio is the great constellation which influences the turning point both in the life of humanity as a whole and the life of the individual human being. – ‘Festival of Scorpio’ Lucis Trust (https://www.lucistrust.org/resources/festivals/scorpio)

FULL MOON in TAURUS on October 31st, reflects these underlying transformative cycles, expressing the intuitive response of the lunar opposition: a vision of acting as ‘Builders of a Good Dream’ as a result of inner transformation. [LINK to Taurus article – The Astronomy of Taurus]

BACKGROUND NOTES TO SCORPIO (ESSEX) IN THE BRITISH ZODIAC

The Roman Sphinx now at the entrance to Alchemy of transformation crouches on a pedestal Colchester Castle Museum. encapsulated in sculpture, the ‘grail’ of sacred art.

In Colchester we find the Sphinx as the ancient symbol of human soul’s (symbolised by the femaile head) incarnation into mammalian form (the ‘lion’ body).

The Scorpio Landscape has been warmed and melted by many pilgrim hearts celebrating the solar festivals, and contemplated the ‘alchemical’ human journey of transformation. Here are details for you to research:

Situated on a beacon hill, 365 feet above sea level, the village of Danbury has a history of settlement dating back to Neolithic times. The site of an Iron-age hill fort is now occupied by the church of St. John the Baptist, and surrounded by the most extensive tracts of common land (second only to Epping Forest) in Essex. This is a landscape which has multiple connections with a number of prominent Norman families linked to the Knights Templar: the de Mandevilles, de Veres, de Bohuns, the Sinclairs and the Bruces. We will first visit the church – famous for the discovery in 1779 of a pickled knight as well as for two remarkable thirteenth-century effigies of cross-legged, St. Clair crusaders. We will then take a walk around Lingwood Common, a beautiful area of ancient wildwood.

This year, for our Spring celebration, we will pilgrimage to two chakra points in the Colchester townscape temple: the Solar Plexus and the Crown, before taking the road due south across the waters to Mersea Island, with views in all directions over the estuaries of the Blackwater and the Colne.

When archaeologists excavated a site at Stanway, just outside Colchester in 1997, the finds from one particular grave hit the international headlines. The contents included a gaming board with white and blue counters, a complete set of medical instruments, a strainer bowl containing traces of artemesia and a unique set of rods and rings which mystified the experts. Made for divining or for divination? Now, at last, these finds have been put on display at Colchester Castle Museum as part of a new exhibition entitled Rulers, Warriors and Druids. Also on display are the contents of two other remarkable burials which we will visit in the course of the day: the treasures extracted from the Lexden Tumulus – the finest Iron-Age Burial in Britain and the lead casket containing the spherical glass bowl which enclosed the cremated remains of a child, entombed at Barrow Hill, Mersea Island.

After our visit to the museum, and a short ceremony in the beautiful grounds of the castle to bring light to the dark history of this site – a prison and place of execution for witches, Protestant martyrs and Royalist leaders – we will have an early lunch at the Minories Café. Then on to Lexden to the Tumulus burial of King Addedomaros – now under the guardianship of Gatekeeper, Diana Tinson! Within a circle of great fir trees, this site has a very special atmosphere of healing and peace. Then, crossing the Strood to Mersea Island, (low tide!) and ascending Barrow Hill, we will pass through a gateway set into the mound to enter a Romano-British tomb…

For our Autumn Equinox pilgrimage – in celebration of the Festival of Consummation – we will be visiting Audley End house and grounds, near Saffron Walden. This spectacular Jacobean mansion, designed to receive royalty, is set in a magnificent landscaped park – a perfect place for exploring histories and for celebrating the fruits of nature and culture.

Over eight centuries the buildings and the landscape have seen dramatic changes in fortune and function. A Benedictine Abbey founded by Geoffrey de Mandeville on the banks of the river Cam, then a succession of Tudor, Jacobean and Georgian architecture, a picturesque landscape designed by ‘Capability’ Brown, a Regency parterre, a vast Victorian kitchen garden and the secret HQ of Second World War Special Forces.

After gathering in the café garden, we will tour the extensive grounds in a spirit of pilgrimage, pausing at portals, fountains, ha-has, temples, bridges and the ‘Elysian Fields’ to reflect on their symbolism. In the afternoon, it will be possible to tour the house – the Great Hall, the state apartments, the Robert Adam rooms, and beautifully restored kitchen, laundry and dairy.

For our Autumn Equinox pilgrimage – in celebration of the Festival of Consummation – we will be visiting the remote Dengie Peninsula, between the Blackwater and the river Crouch, a haunting setting for the seventh-century chapel, known as the cathedral on the marshes. Founded by St Cedd, who landed there in 653 on the site of the old Roman fort of Othona, it remains the sole monument of the Anglo-Celtic church of the East Saxons.

We will approach Bradwell in stages, first gathering at the Café-on-the-Green at Danbury. There we will visit the church of St John the Baptist which is famous for the discovery in 1779 of a pickled knight as well as for two remarkable 13th-century effigies of cross-legged St Clere crusaders. The church is situated on a beacon hill, 365 feet above sea level, with extensive views of Maldon and the Blackwater estuary. We will then drive to the Dengie Peninsula, stopping at a second beacon hill with panoramic views of Mersea Island and the North Sea, before descending to Bradwell-juxta-Mare for lunch at the King’s Head.

After lunch, following in the footsteps of 13 centuries of pilgrims, we will make our way to St. Peter’s and explore the shoreline of saltings and cockleshell beaches. Close by is the Othona Community, an ecumenical retreat centre involved with projects promoting peace, the arts and the environment where we are invited to tea.

Our pilgrimage in mid-Essex will take us on a journey through time from fortified hill-tops and Sarsen stones to Saxon ‘ings’ and Norman arches – to a romantic Tudor hall, set in an enchanted garden. What links all three of our destinations together is the imagery of the VINE, an appropriate symbol for a pilgrimage in celebration of the fruits of autumn, the Festival of Consummation.

The 12th century church at Margaretting is dedicated to St Margaret of Antioch, the dragon- slayer. A striking feature of the outside is the wooden belfry tower, a feature unique to Essex. The especial glory of the church inside is the Jesse Window, made by the King’s glazier in 1460, depicting the genealogy of Christ’s descent from David.

Nearby, in the little village of Fryerning, is the church of St Mary the Virgin, situated on an eminence, surrounded by a grove of Scots pine. The machiolated tower is especially fine – commissioned by the Knights Hospitaller, designed by Henry VIII’s favourite Italian architect, and bearing the five-pointed star of the Earls of Oxford. Inside, the rare 12th c. font, a gift from Queen Matilda, is decorated with Sun, Moon and Stars. 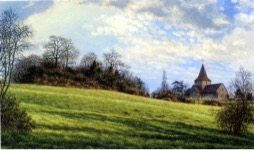 We plan to celebrate the coming of the Autumn Equinox by visiting three sacred ‘mounts’ overlooking the beautiful landscape of the Stour valley. These three sites form a perfect equilateral triangle, and are linked in turn with the equinoxes (the cross of St. Andrew), the summer solstice (St. John the Baptist) and the winter solstice (on the feast of Stephen). The morning will consist of a leisurely walk over Lodge Hills to Wormingford Mere and St. Andrew’s Church. Lunch will be at the Crown Inn, Wormingford, which serves excellent home-made food.

After lunch we shall drive to Mount Bures with its picturesque cruciform church and fine Norman motte. The day will end with a visit to a thatched chapel on top of a little hill – where in 855 King Edmund was crowned, and where the alabaster De Vere knights now lie sleeping.

The Saltire Cross linking sacred sites through London (Peter Dawkins),
Straddling the Scorpio/Sagittarius cusp and alignment with the centre of
The Milky Way Galaxy.

At this Scorpio point of the year, we will pilgrimage to Little Maplestead Church, one of only five remaining round churches in England, modelled on the Holy Sepulchre at Jerusalem. Dedicated to St John the Baptist, it was the church of a Commandery of Knights Hospitaller. Sited NE of Temple Church in London, it represents symbolically the cornerstone associated in ritual with the Knights Templar higher degrees.

Little Maplestead holds a special position in relation to London, along with St Albans, The Seekers Trust at Addington Park near Maidstone (a healing centre), and The White Eagle Lodge at New Lands, near Petersfireld (a meditational and healing centre). The four places are in a diamond pattern around London and geometrically act like a heart-jewel for London. Our heart-felt pilgrimages, dances and singing at these places can offer harmony and beauty to London at this special time of opportunity. We hope to sing in the Little Maplestead church as part of our pilgrimage.

The alchemy of Art in Colchester City.