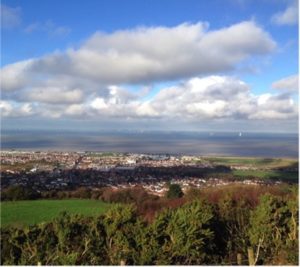 North Wales Coast (photo by Jane Knight)
“Not all those who wander are lost” (JRR Tolkien, The Fellowship of the Ring)

Pisces ‘The Mystic’ within us seeks to find an answer to “How can I express unconditional love and healing in my life?” The lunar answer with Virgoan intuition is: ‘Through creating infinite beauty and perfection in the land on which you live.” The earth’s mysteries under the feet of our personal homeland guide us to discover the wisdom in the land, our ancestors and our personal destiny of being inspired by the spirit of the land. 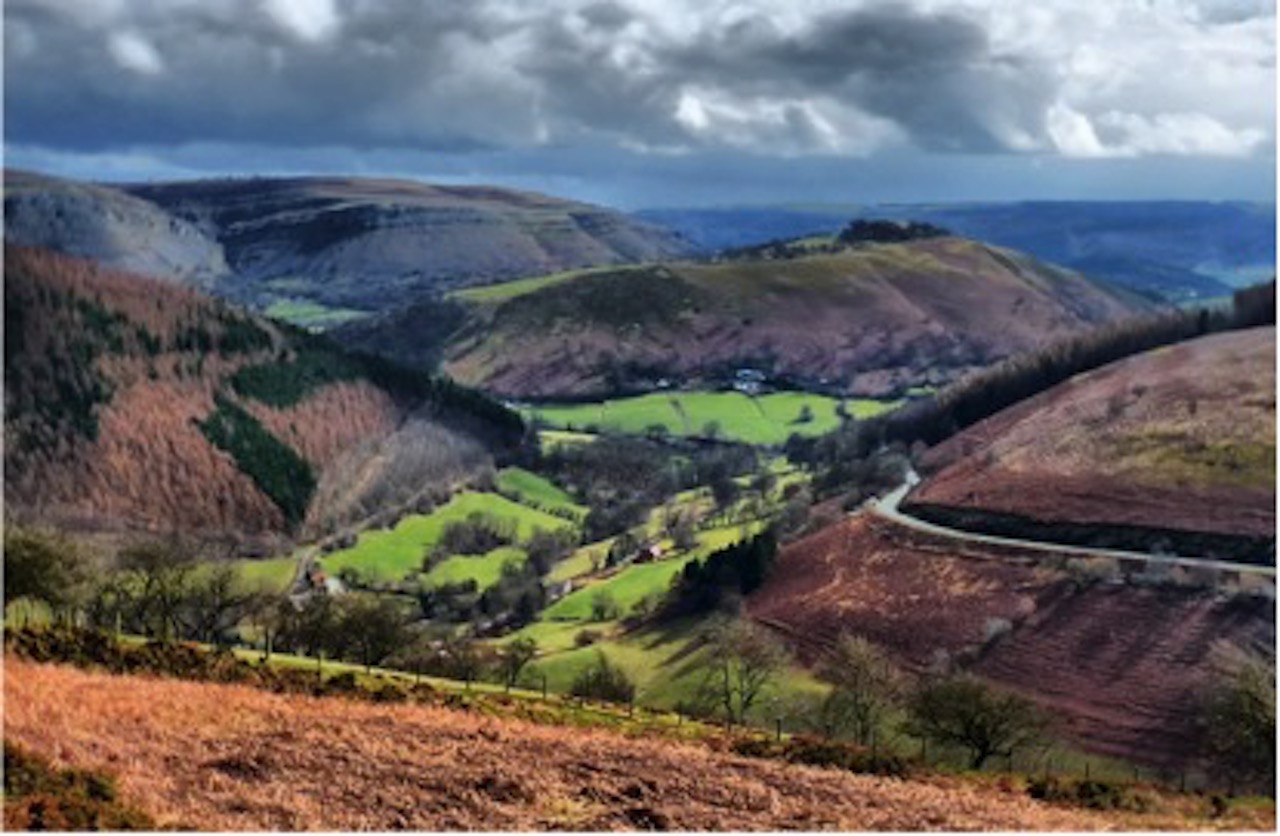 Hugh Evans says about this area: ‘Crowning the Eglwyseg Valley is a 200-foot cliff now named Craig Arthur, but of old called Cadair Arthur (Arthur’s Throne or Chair. It’s the vicinity to the south of Llangollen there is also Flynnon Arthur (Arthur’s Well) and numerous other geographical references …’ [Hugh Evans, 2000.]

Jane Knight, our local contact for that area, shared slides with us in her talk about ‘The Wales of My Childhood”. She reminisced about and reflected on living in a landscape (modern day Flintshire and Denbighshire) which holds many mythological and historical stories of the Welsh King Arthur and Princes of Powys where original place names are still remembered. She shared her excitement in learning of the magical traditions and memories that emerged from her search, and that held a key to the home of the last original British Kings. She came across Steve Blake and Scott Lloyd’s book ‘The Keys to Avalon” which questioned whether earlier accounts of the regions of King Arthur’s kingdom were confused with the main regions of Great Britain by later historians. Today she walks in the footsteps of her ancestors who honoured the identity of early Britons and guarded the land with sacred rites and oral histories. Here are some of her findings, and images. 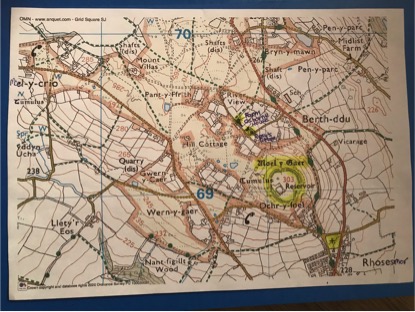 Caerfallwch (‘the Fortress of Afallach’) is the community nestling in the shadow of Moel y Gaer (the Hill of the Fort) – Afallach has been associated with Avalon.
Its modern name is Rhosesmor.

‘Caerfallwch is now more widely known as Rhosesmor. However on its village church notice board the village claims to be in the township of Caerfallwch. Interestingly, the land has remembered, and its original name has not been forgotten.’ 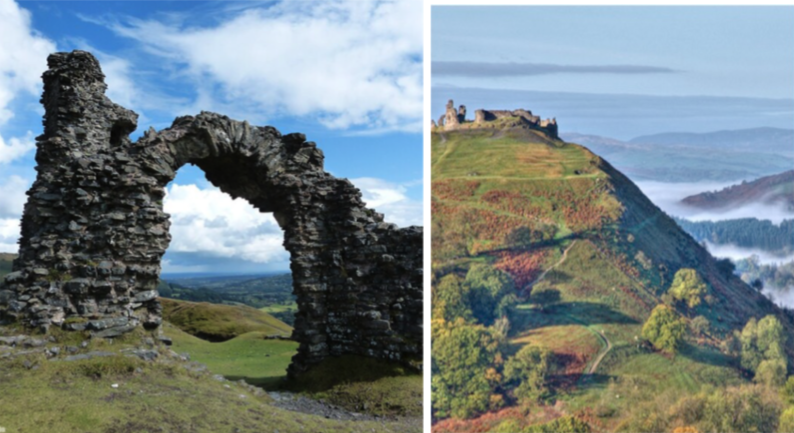 Dinas Bran (‘the original Castle of the Grail’) outside Llangollen.
Bran is an ancient Welsh hero (a god before the advent of Christianity). He is the son of Llyr, and is sometimes said to be an ancestor of Arthur.
[http://www.legendofkingarthur.co.uk/wales/dinas-bran.htm]

Many places in North Wales are associated with our deepest mysteries of spiritual transformation: ‘Much of the information available about Bran the Blessed strongly suggests that at least part of his legend entered into later Arthurian romance. His Magic Cauldron is probably that sought by King Arthur in the Welsh poem, the “Spoils of Annwn”. As in Bran’s Irish tale, Arthur travels to the Celtic Otherworld and, like the Welsh tale, only seven men survive. The vessel was later reborn as the Holy Grail, the cup of plenty or cornucopia found in mythology from across the Globe. The wound to Bran’s foot, inflicted by a poisoned spear, which caused his lands to fail is echoed in that of the Arthurian Grail guardian, known as the Grail or Fisher King.’ [https://www.sarahwoodbury.com/the-holy-grail-and-dinas-bran] 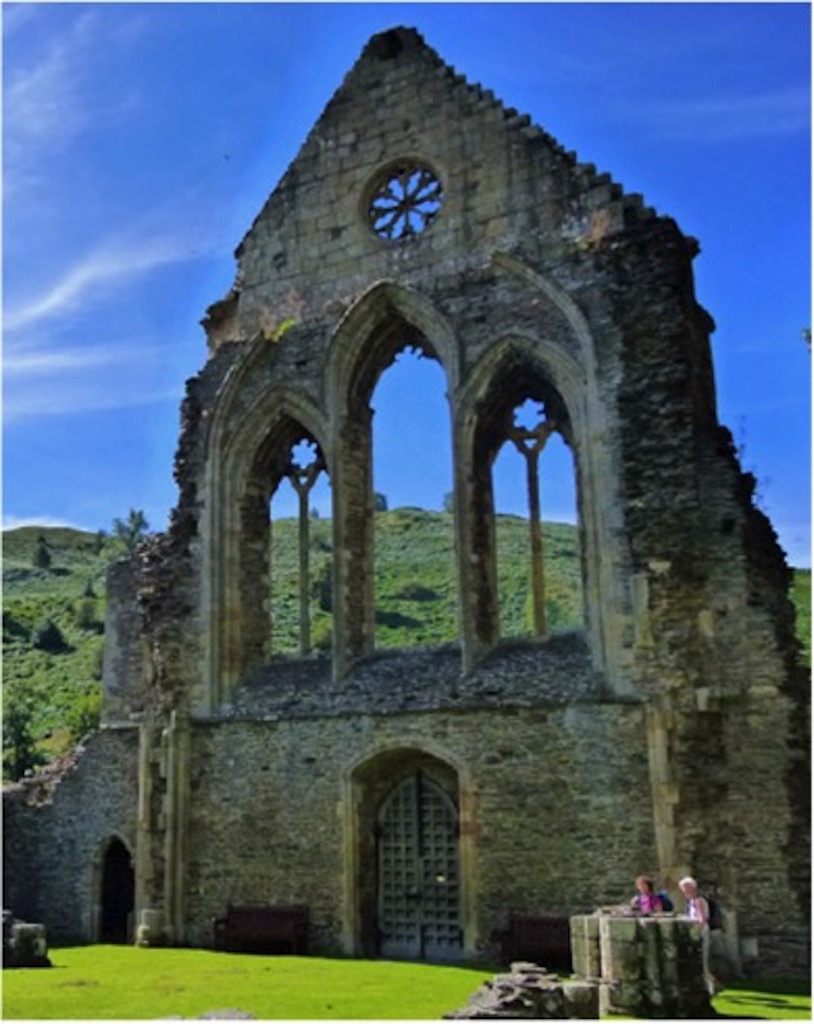 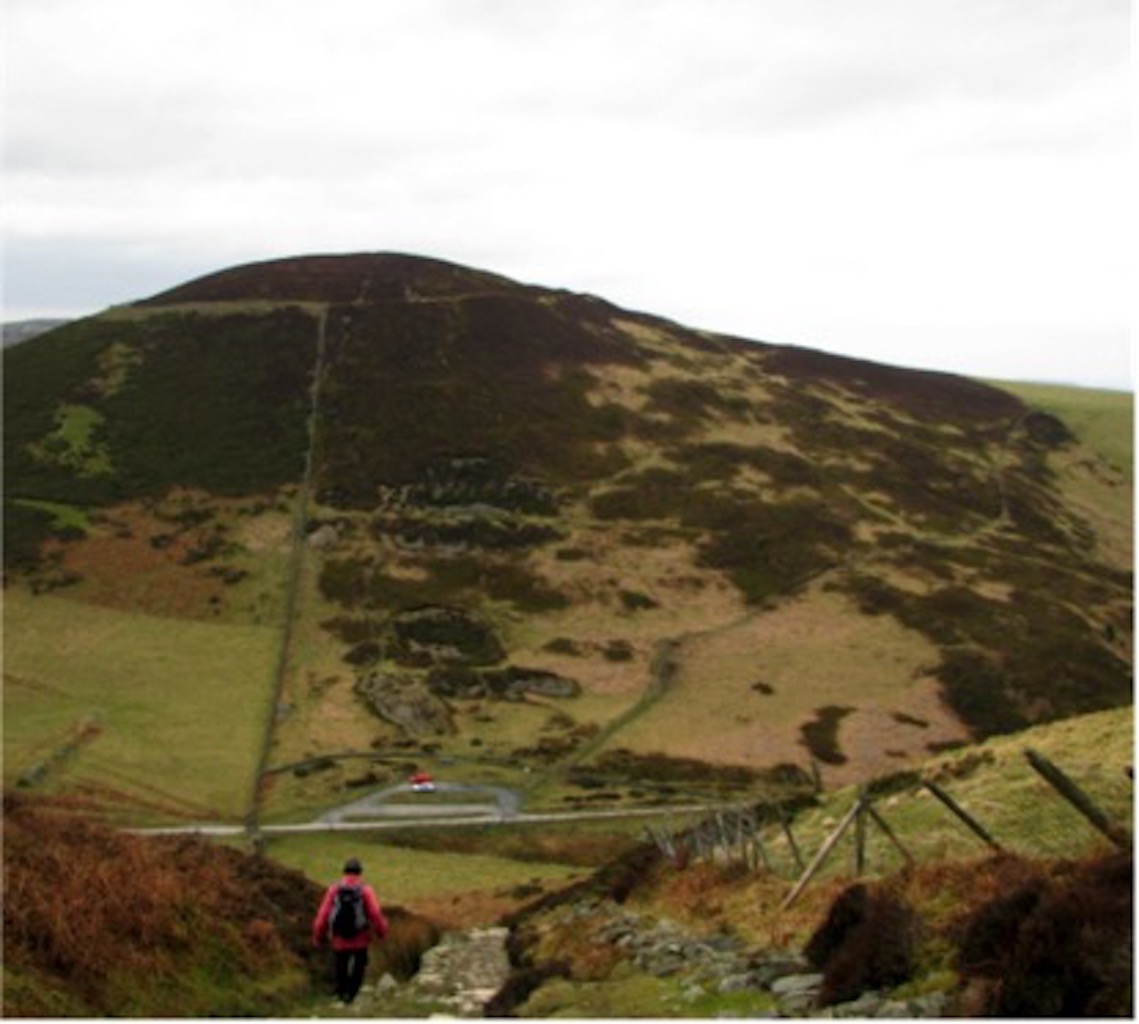 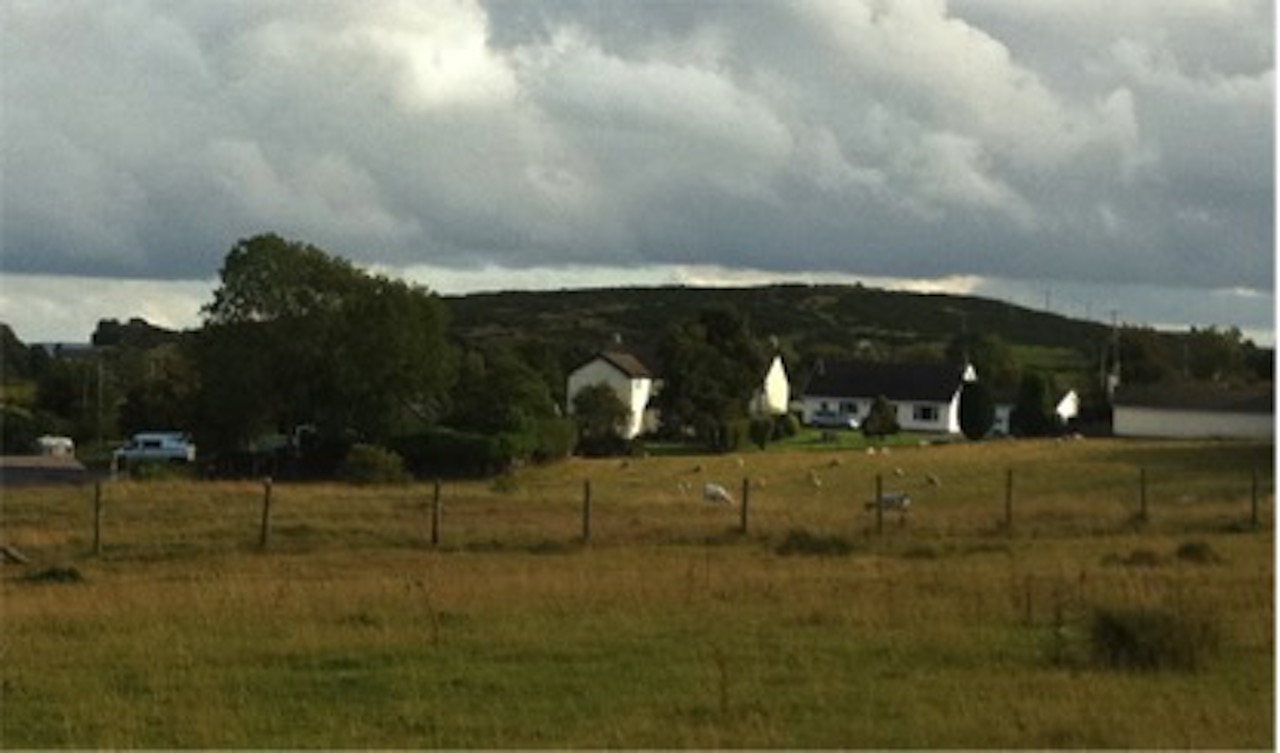 ‘An ancient chapel of St Mary stood on a raised circular site that is still visible and is located within a circle/grove of ancient yews’, while on the south side of the site is the ancient holy well known as flynnon Fair (the Well of St Mary. The site is inarguably ancient and it has been suggested that it dates from the Bronze Age period which is of no small importance as it is distinctly within the heartland of the Avalon/Ynys Afallach.)’ [Steve Blake and Scott Lloyd: ‘The Keys to Avalon’].

Throughout Wales religious buildings were built near to prehistoric monuments, thus a timeline is woven with myth into cultural memory and place-names. Gwynned and Pumsaint in Powys are also places of mysterious cultural coding.

This is another example of Piscean star wisdom and grounding an inspiration for the language of compassion. It also encompasses place names in the roots of place names. 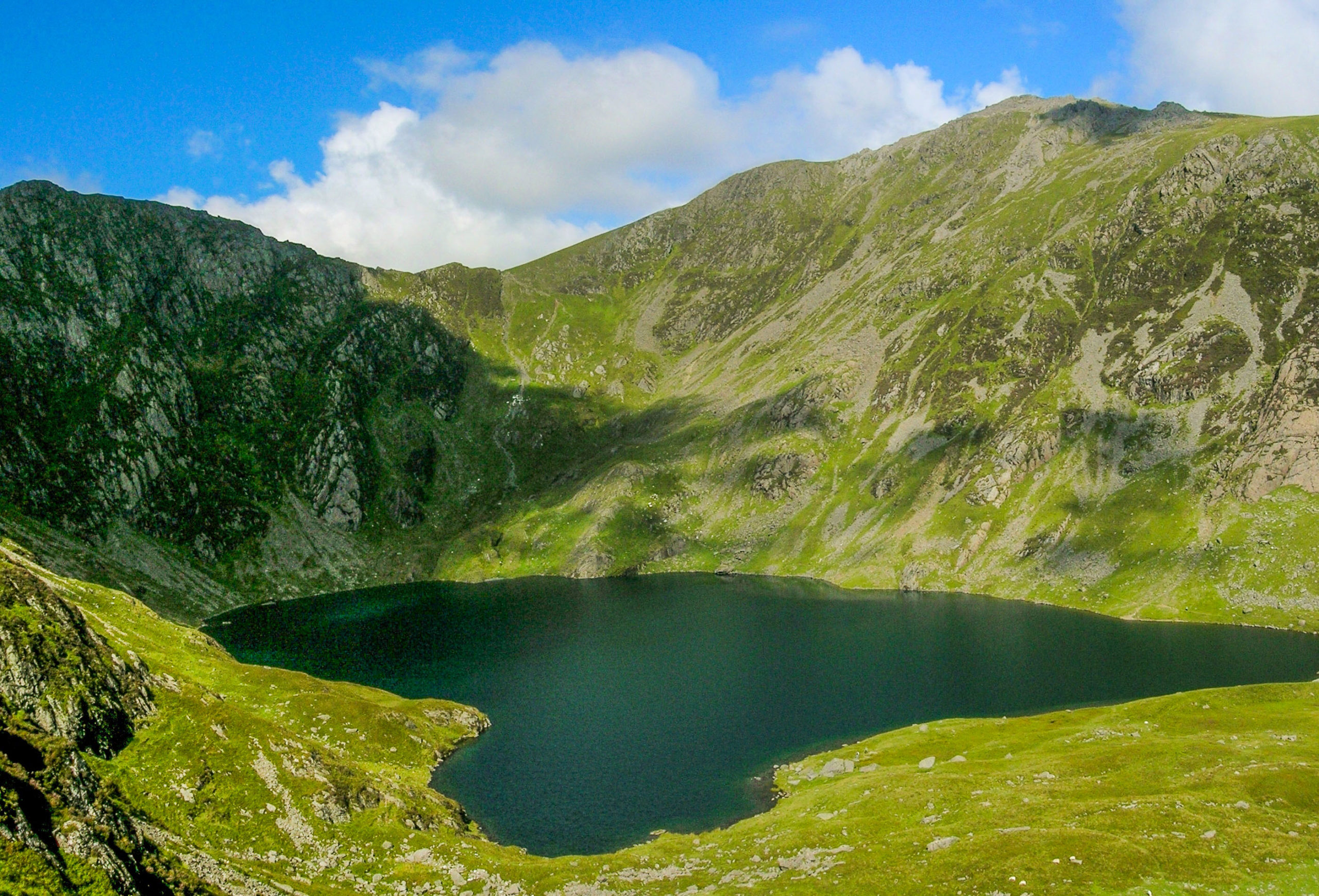 Megalithomania: ‘This zodiac is so ancient it could pre-date the Babylonians and be the source of their star lore. The first of a series of interviews about how the Gwynedd landscape forms the original star maps that we still use today.’ [www.megalithomania.co.uk]

Hugh Evans decoded the name Idris as interchangeable with Enoch, through studying the Book of Enoch. Furthermore, the Welsh language appeared to match early language coding such as the Phoenician and Summerian forms. [see his latest book ‘The Origin of the Zodiac’ – starmaps2020@gmail.com].

The most ancient of wisdom captures the starlight of the heavens, and creates symbols and patterns in the land. These we call ‘zodiac’ or ‘circle of animals’ and the stories encode spiritual teachings as old as the Sumerian say some. Hugh Evans is one, who as an aeronautical engineer and chartered accountant, who decoded an area of landscape around Cadair Idris which emerged as part of ‘The Plough’ constellation. The whole zodiac includes star constellations both within and without the ecliptic 12 signs. He tells us that ‘The natural ground features of Gwynedd shaped the modern zodiac we see today. Many thousands of years old, reaching back to the learnings of a lost civilisation, the Star Maps are the key to a language and culture that connects all the ancient civilisations, back in time to the Gods before the Great Flood.’ In fact each shape as well as the names of features, sacred sites, villages, etc can be interpreted in an ancient Sumerian script which relates archaic ancestral stories all woven into the land’, which have become the roots of our familiar Arthurian mythology. 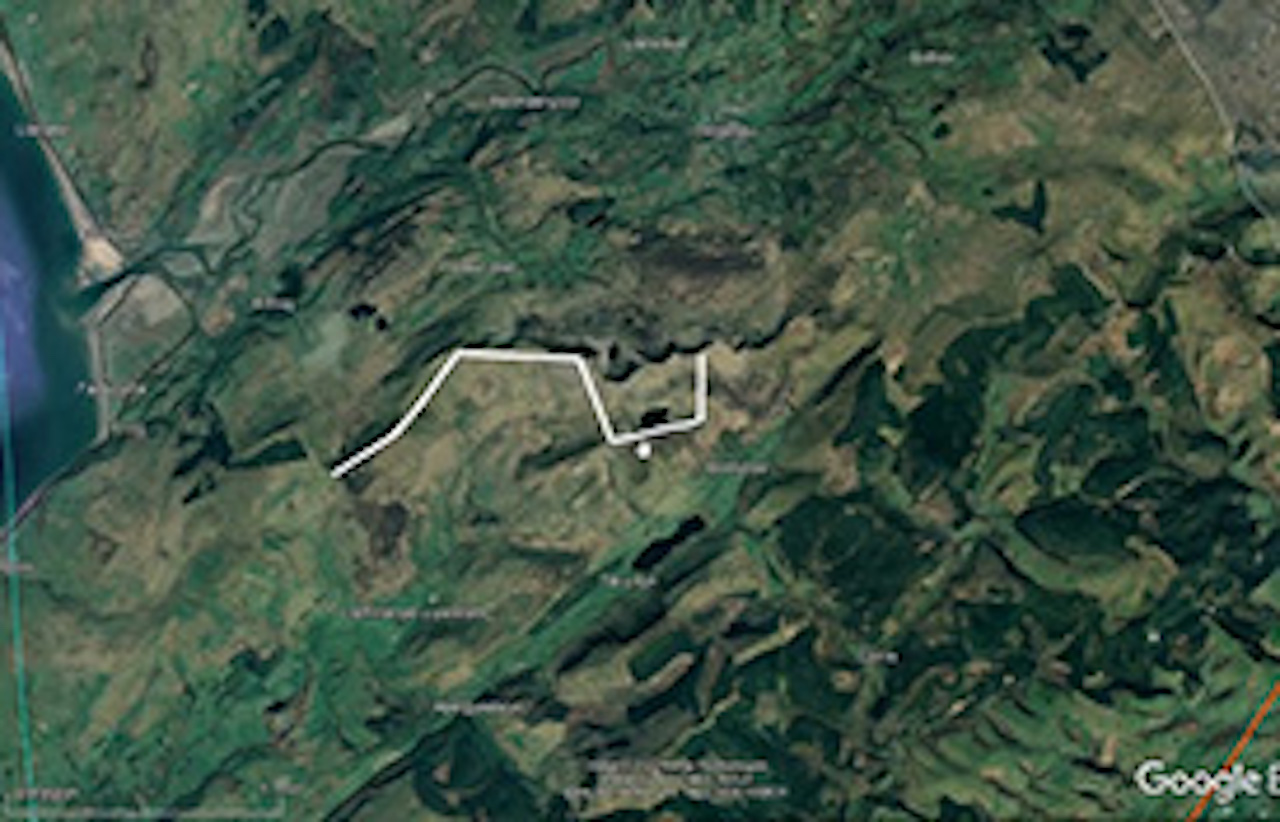 [Screenshot from image by Hugh Evans, [Youtube of interview by Megalithomania: https://www.youtube.com/watch?v=YpTw8_aUFYE],

Here we find Cadair Idris (chair of Enoch/Idris as shown in the Book of Enoch) we find Enoch, being shown the seven stars by God at the top of the mountain, The Seven Stars of ‘The Plough’ have Cadair Idris boiling in the ‘cauldron’ of the Plough’s ‘bucket’. Sirius is a stone circle nearby. The seven peaks of the ‘Plough’ are marked out by the ridge of Cadair Idris. There are no other peaks along this ridge.

The area of the Plough emerges as a replica of the familiar ‘ladle’ symbol, in which ‘bucket’ sits Cadair Idris. Nearby is the village called Arthog in the Mawddach Valley. The name of the river running down from the ‘Plough’ is Afon Arthog (meaning ‘River of the Plough’). It is associated with King Arthur. Seven soaring peaks mark the length of the Plough. ‘The cairn at the top of ‘Craig-y-llyn Braich Ddu’ may represent Alkaid – ‘end of the tail’ – the star at the end of the Plough… ‘The chair points to Polaris on the ground as it does in the heavens.’ [p.49]

In this way, each of the Gwynedd Zodiac signs and constellations has been carefully measured by its discoverer Hugh Evans. He traced the origins of the stories of star patterns back to the Babylonian culture, and further. This map is present in video together with a fully articulating Google Earth chart. This chart zooms into map detail, and overlaid designs relating to the Milky Way and other interpretations. He shows a symbolic picture of the Megalithic monuments as they relate to each other on land, and form the outlines of constellations. All aspects of his interpretations are mutually reinforcing. 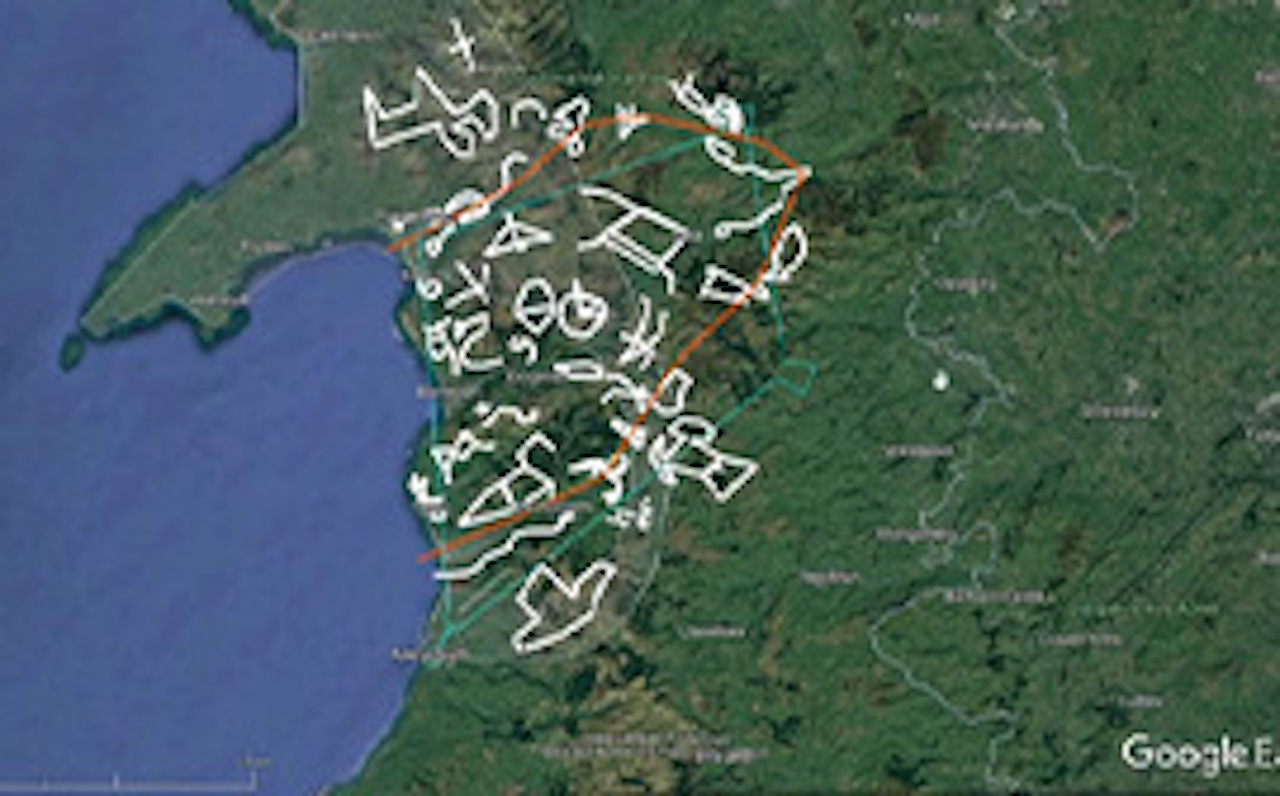 [Screenshot of the Hugh Evan’s star map of Gwynedd: Megalithomania .[permission being requested]
The Milky Way appears as a pale white crescent stretching to Anglesey in the North and South through recognisable Orion with his belt.

Hugh Evans outlines other star constellations inside and outside the ecliptic. Through it the white area represents the Milky Way and includes Anglesey/Lleyn which equates with the ‘spiritual world’, traveling through the ‘mortal world’ of signs inside ecliptic, and down into the ‘underworld’ of constellations outside the ecliptic, e.g. Orion to the East-South-East with his belt, and Sirius below as a separate stone circle Cerrig Gaerau. 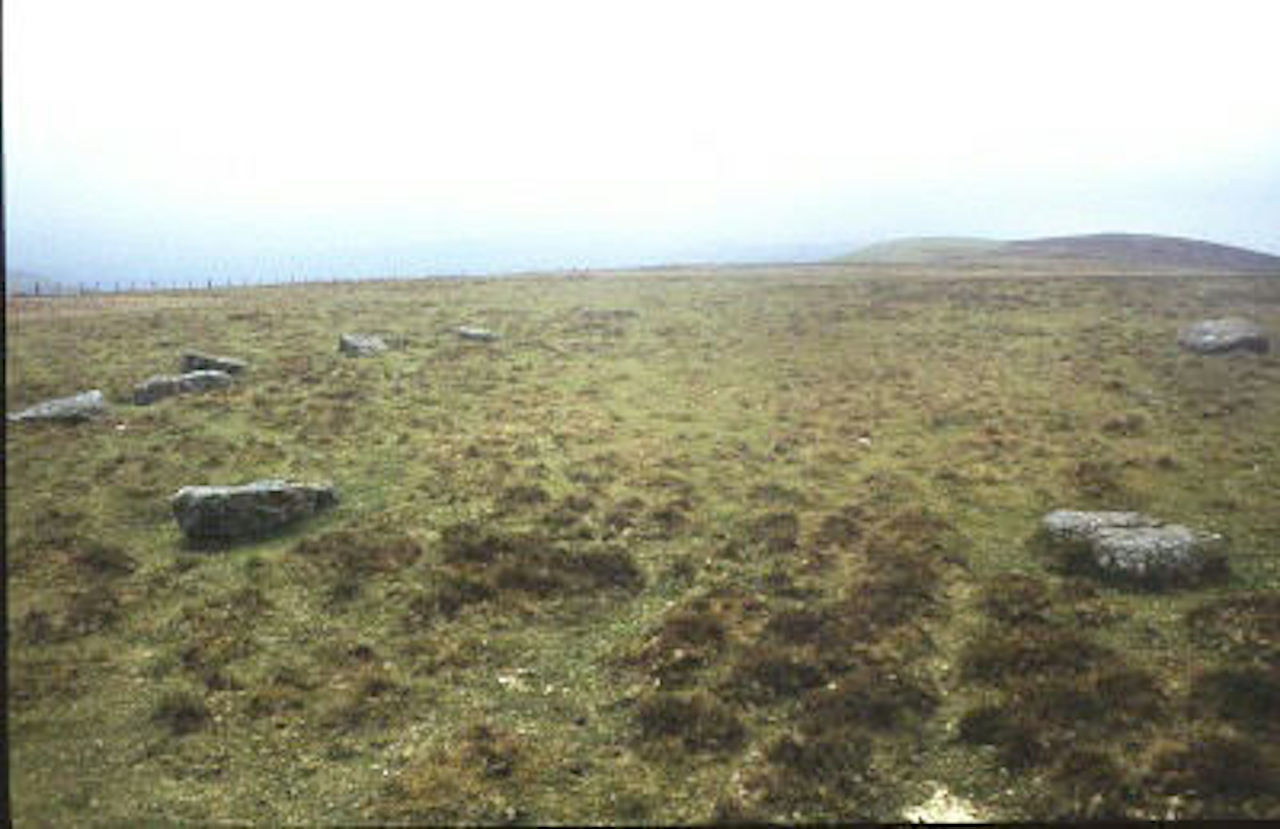 This was the ancients’ mapping technique for understanding time and its measurement, so that they could begin navigating to new countries. Now we have this ‘crafted gift’ from a modern professional, walking in the ancestral steps of this ancient science of ‘astro-archaeology’.

Finally, we express our gratitude to those shining their light onto the beauty and the wisdom of the land with the symmetric patterns of our Welsh – Arthurian - ancestors. In unveiling the ‘inner secrets of the round table’ - the British Zodiac –we take our imaginatory quest from Pisces (our inner Mystic) and the Welsh mountains, towards Virgo ‘craftsman/perfectionist’. We can realise that it is for us to recreate the beauty, symmetry, and precision of sacred geometry, retelling the story of the wisdom of our modern homeland. We hope many can personally rediscover these deeper wisdoms, enfolding our planet that captures our hearts.

‘By generating a new competent coherent cosmological story that is compelling and interesting - because deeply intuitive and remembered, a compilation of things present with that which is past – we witness the current state of cultural evolution, walk our talk and by doing so we change our world.’ [Taken from a talk by Anthony Thorley ‘Cosmological journeys of memory and culture’]

Readers, let us know your own stories, as we create a new picture of the spirit of the land. In these times we are creating a ‘golden thread’ of wisdom into the cultural values of creating sacred space to hold the memory of how to be inspired by DIVINE COMPASSION. 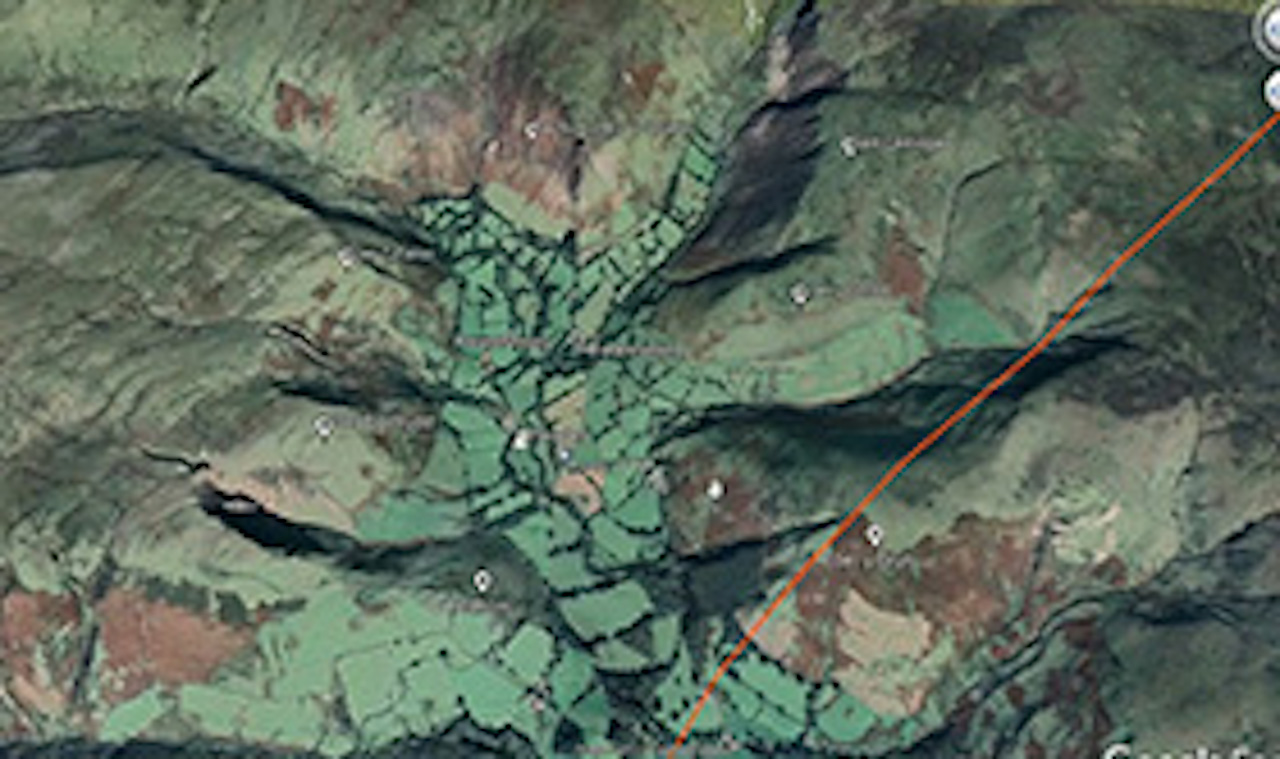