This full moon in Leo represents the ‘wisdom of the heart’, where we ponder on the role of leadership that brings our spiritual vision brings into blended harmony of heart and mind – the ‘philosophical heart’. The following virtual pilgrimage covers the Yorkshire landscape and the City of York with its interweaving woodland sanctuaries, history, art and architecture with sacred spaces. 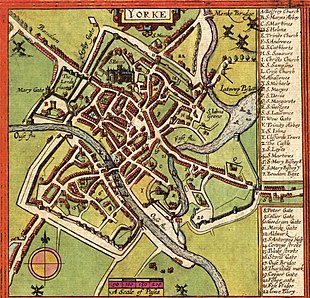 Encircling the walls of York with pilgrimage, two pilgrims walked with awareness round the city’s beautiful, heart shaped walls. It invites us as readers to imagine what it is to tune into and bless the spirit of place overlighting its population within:  ‘Substantial portions of the walls remain, and York has more miles of intact wall than any other city in England. It took us 3 hours to walk right around the walls, and we, as Leo beings, tuned into the Leo on the Landscape temple of Britain and so the Wheel turned.’ (Rose Williams and Charles Everett}. 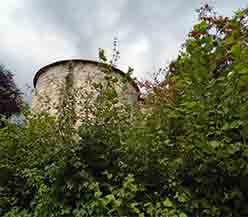 Four pilgrims stayed at the YHA to spend a couple of days discovering the energy centres of the
city in preparation for a lantern pilgrimage. After a day of reccy to discover the possible chakra points in the city, we tuned into the city with maps and Peace lanterns. We asked the city angel where was the right place to start pilgrimage.

We intuited that the river junction was the actual root energy centre for the city, and found a sign indicating the site of St George’s chapel built in the 1200’s by the Knights Templars. This
confirmed the original geomantic outline of the city was identified at that time, and when the
Templars were abolished, St George’s Fields came into being, and became ‘associated with
parades, processions, promenades and public entertainment…"

In the early days, every able-
bodied man donned armour, took up shoulder-pike, halberd or matchlock and marched behind
his parish constable to St George's Field where they were marshalled into a procession and
moved off to a roll of drums, the braying of trumpets and tootle of fifes," Chris writes. "At the head of the procession were the legendary champions of Christendom, St George and the Dragon, followed by the mayoral party..." [local historian Chris Dowell]

We walked in with Peace Lanterns along the banks into the city towards Clifford’s Tower and the churches in alignment with the Minster.

Root Chakra: The joining of the rivers Fosse and Ouse, the Fosse felt feminine, covered in
water lilies anddraped with weeping willow. The Fosse felt masculine, with strong mature
guardian oaks along the banks. We tuned in by taking pictures of the different riverside flora and fauna, ducks and pigeons, geese and peace lanterns.

Sacral Chakra: Clifford’s Tower, with the old prison nearby which is now a museum, and to the
West of the Shakespeare’s Rose Theatre, offering outdoor plays for the passing audience. We
entered the tower and found the visual alignement with St Mary’s church and the Minster.

Solar Plexus Chakra: St Mary’s Church is now an education centre, where we filled in a form about our vision of bringing people together here as a community. It already has a lovely community atmosphere with activities, and welcoming team of staff who invited us to write our comments of appreciation and ‘future dream’ for the centre.

Heart Chakra: All Saints Pavement Church with a lantern tower for signalling respite to
wayfarers and pilgrims, signifying a welcome to the Cathedral pilgrimage. Its modern ‘Dove
Window’ spoke of its original vision of peace, and we lit our lanterns at the altar for meditation.

Throat Chakra: St Sampson’s church which is now a leisure and coffee centre for the Over 60’s.
It had a reclusive chapel for silent prayer, a café and outside seating area.

Nearby is Emperor Constantine, who instigated Christendom. We pondered at the symbolic
nature of architecture and is resonance through the centuries.

Pilgrimage to York and Thornborough Rings, 2019:

This year we linked with the White Eagle group members living in the city and nearby, and
travelled to Thornbury Henges. These occur in a triangle linking Harrowgate and York in the
landscape.

This landscape forms a sacred triangle with the City of York, Harrowgate and the mysterious Neolithic Prehistoric Thornborough Rings.

‘The Thornborough Henges are unusual in that the structure is in alignment with a well known
constellation in the night sky. The lines joining the henges do not form a straight line but instead were intentionally shaped like a “dog leg” to reflect the stars of Orion’s
belt.’ https://www.ancient-origins.net/ancient-places-europe/sacred-prehistoric-neolithic-
complex-thornborough-henges-003652

We carried the energy of our dancing to York, where in St Mary’s Abbey gardens and museum, we again dancing Paneurythmy in harmony with the wider landscape complex, where the henges formed the pattern of the constellations of Orion, linking to the underlying alignment of the pyramids of Egypt and other star maps.

Amongst the ruins and the museum precinct, a little sanctuary seating. We wonder what its role is in relationship to the Minster within the walls, being in the symbolic NW of the city, a traditional starting point for a circum-ambulating pilgrimage.

The heart awareness to which we atttune in Leo, is one which seeks to bring empathic
imagination to the act of leadership, embracing and encouraging diverse creative roles and co-
creating group consciousness. Our lunar intuitive guide points to the ‘inner collaborative leader’ of the hear, reflects the Aquarian sun ‘Truth Seeker’ with open mindedness. As we move into the new age of Aquarius, the wisdom of the heart and mind in harmony, guides us into the flow of universal knowledge.

The Thornborough henges lie in the pattern of the constellation of Orion, and are aged between
3500 and 2500 bc coinciding with the earliest Egyptian dynasties. From here we can ‘rescue’
our own earliest cosmologically aware and powerfully creative cultural roots: and expand our
sense of identity to being one with our planet and humanity: ‘earth one country; humanity one
family’?

Working with the city angel: Dorothy Maclean at the Findhorn Foundation gave us my a
definition of ‘angel’, the being the creative thought-field that human hearts create when living
and working together in an area like a city, town or country. Now with our urban way of life,
working with the city or town centre, marked by churches and other early archaeological sites,
we can work with the spirit of place, honouring all the creative thought, inspiration and loving
work carried out by communities over the centuries of development.

CREATING A HEART CENTRE IN PILGRIMAGE:

I have experienced pilgrimages, which have involved two groups: walkers and non- walkers.
Those who are less able to stride over the hills, stay close to a water course and create natural mandalas around which to sing, dance or write poetry. As both groups keep an awareness
together, and meditate at an agreed time, the energy is dynamic: the ‘hub’ creates a grounding
effect through dance, the ‘spokes’ carry an out reach energy to other parts of the landscape.
Together an angelic blessing is created that reaches around the wider landscape, incorporating
communities and Nature.