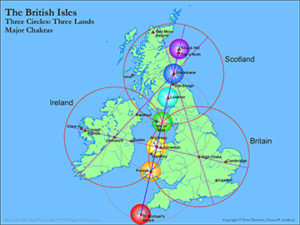 The three heart centres of the ‘Isles of Hesperides’ (Ancient Greek: they are the nymphs of evening and golden light of sunsets, who were the "Daughters of the Evening" or "Nymphs of the West". They were also called the Atlantides..’ [Wiki} 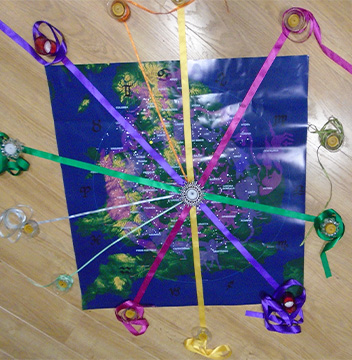 The mandala of candles and connecting ribbons on the map of Britain, during our special pilgrims’ week-end at Purley Chase Centre.

This Full Moon is an additional event for Libra, and in taking this opportunity to re-connect with the centre of the British Zodiac, we ask how we can move into Universal Time and create the infinity pilgrimage? Infinity is represented by the lemniscate ‘ribbon’ where each edge becomes one unbounded line of eternity. It is like a path through a timeless present, where we let go of logic where we just ‘be’ and not think.

This transcendent quality of consciousness is within us at all times, and we access it through facing the ‘knights of the round table’ challenge to find their way to the heart and find their holy grail. This is the equivalent to bringing our kundalini up into the heart – through all the difficult emotions of survival, where – we begin to develop a ‘passion of purpose’ and lift our whole personality up into universal spaciousness of the crown chakra, asking for divine love and wisdom to be born. 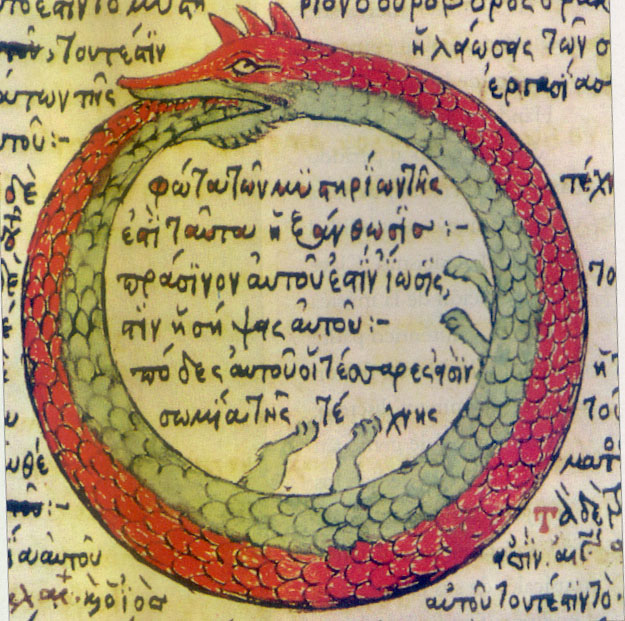 Wiki: ‘The ouroboros is often interpreted as a symbol for eternal cyclic renewal or a cycle of life, death, and rebirth.’ 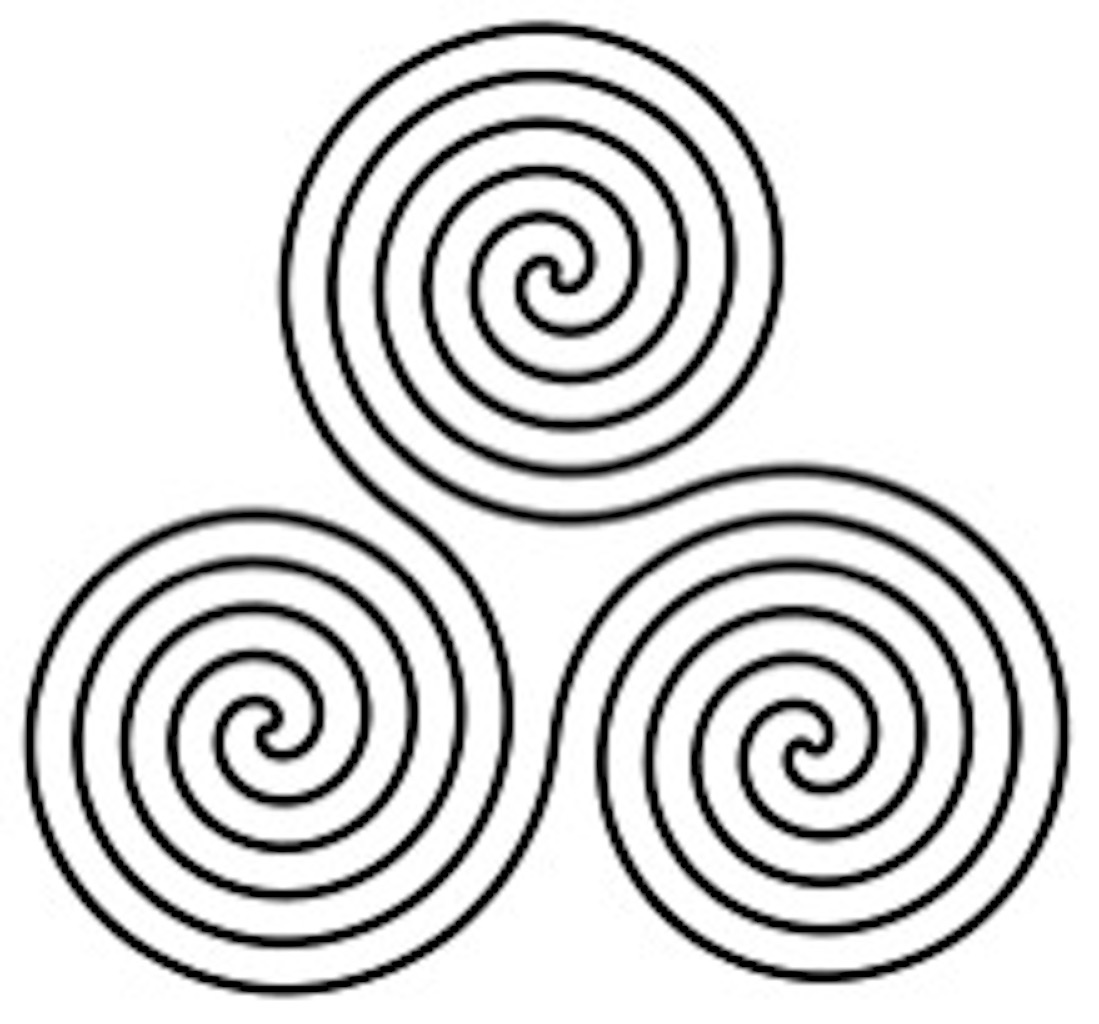 Neolithic triple spiral – similar to that at Newgrange Ireland – is often interpreted as representing the myth of the ‘triple goddess’.

REFLECTING ON OUR JOURNEY AT THE CENTRE OF BRITAIN’S ANCIENT LANDSCAPE ‘WHEEL OF LIFE’.

In the star map of Draco round the centre of the British Zodiac, we visited places associated with the welsh Arthurian sovereigns, as follows:

ATHERSTONE/MANCETTER (Roman Manduessedum where it is reputed Boudicca had her last stand in a narrow ally below Hartshill): Nearby is Merevale Cistercian Abbey: Remains show water systems and ironworks, the first signs of industrial skills being developed.

HARTSHILL BURIAL MOUNDS – site of the memorial stone to a Welsh king Arthur (see Adrian Gilbert’s book ‘The Holy Kingdom’), who battled against the Saxons. They can be found near Oldbury Camp, a Neolithic ‘univalate quandrangular fort’ ‘… ‘whose height and largeness do still shew the strength it was of’. https://www.ourwarwickshire.org.uk/content/catalogue_her/oldbury-camp

CANNOCK CHASE – CASTLE RING – Arthur’s Camelot: a resting point of the holy head of Bran on the way along the A5 to the ‘White Hill’ in Caer Troia (London). The High Kings of Britain continued their role at the centre of a large cultural landscape of initiatory symbolism, through which the two Welsh King Arthurs fought Roman and Saxon invaders, and built connections from Wales to England, one buried in Wales the other with a tombstone memorial at Oldbury, near Atherstone (Arthur’s Stone) on Hartshill. [see Adrian Gilbert’s book ‘The Holy Kingdom’ based on research by two Welsh Historians).

CASTLE RING, CANNOCK CHASE
https://cannockchase.org.uk/proud-to-protect/heritage-and-history/castle-ring-hill-fort
‘It is believed the site was abandoned when the area was conquered by the Romans. Earthworks show that there was once a hunting lodge on site believed to be built in Medieval times when Cannock Chase was royal hunting ground….Castle Ring car park postcode: WS15 4RN’

PILGRIMS’ WEEKEND 2017 TO INAUGURATE THE GATEKEEPER ‘WHEEL OF LIFE PROJECT’. 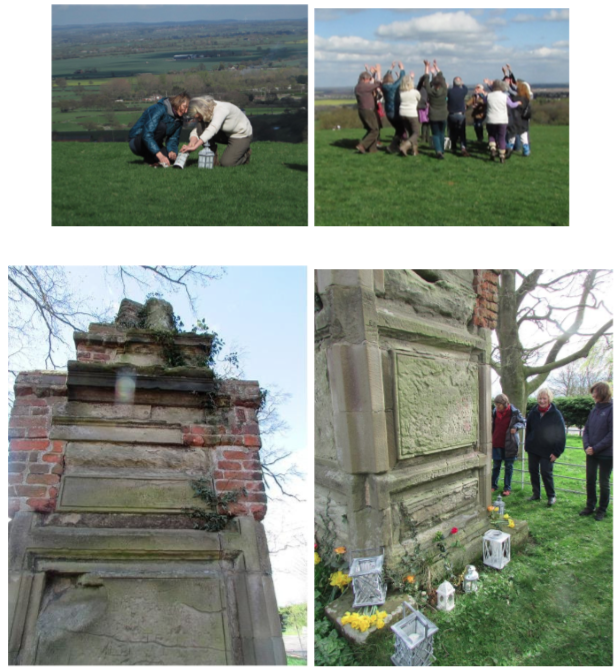 The Gatekeeper Trust ceremony at the Centre of the British Zodiac: High Cross, and Hartshill overlooking the landscape to Cannock Chase in the distance.
[Showing a rainbow sphere at the remaining High Cross pedestal where we laid our lanterns and roses]

The images can be used as a meditation focus. This year we are being guided to use the symbol of the lemniscate, or figure of eight, to construct a dynamic connection with the Centre of the Zodiac, within the Warwickshire landscape at High Cross near Atherstone, at the cross roads of the A5 and the Fosse Way. Our meditation can also link across to the heart of Maia, Isle of Man:

THE ISLE OF MAN PILGRIMAGE 2016

TO START AT THE CENTRE OF MAIA AND DEDICATE OUR PROJECT TO THE SPIRIT OF THE WHOLE OF THE BRITISH ISLES (ANCIENT ISLES OF THE HESPERIDES). 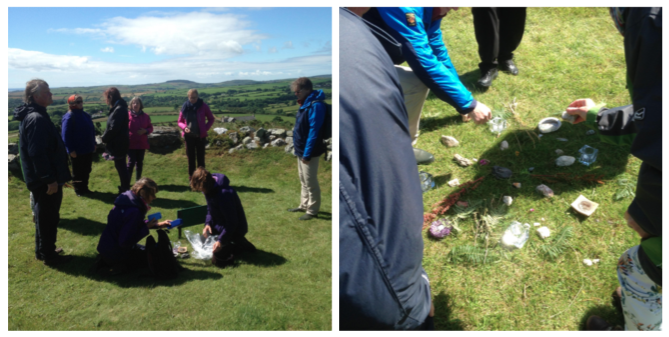 Lighting the lantern at the Old Tynwald site, Centre of the Isle of Man, 2016.

MEDITATION THEME: We reflect on our own centre, the presence of our inner ‘self light’, link with the Universal fellowship of light. By holding our landscape ‘heart chakra ‘triple spirals’, the triple hearts – of Maia at the Isle of Man and Lake District; the heart of the British Zodiac at High Cross; the heart of the Grail Temple of France and Britain at London. 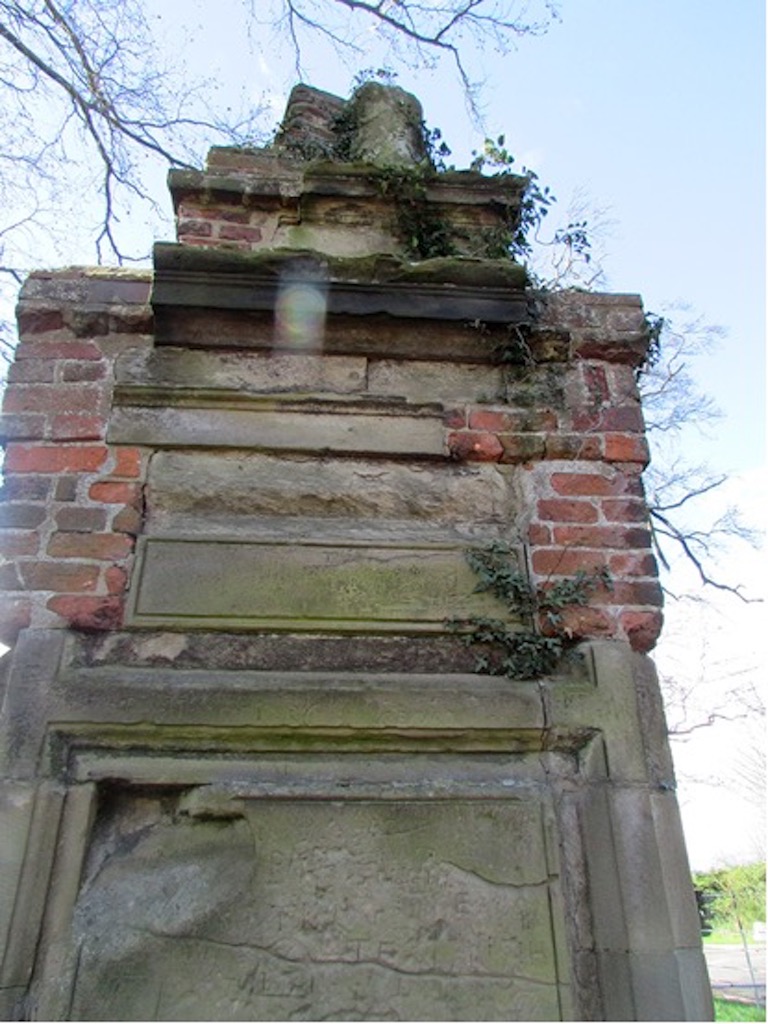 The remains of the ‘High Cross’ marking the centre of Britain, where
Boudicca held her court, and which the Romans eventually took over, to control
the centre of power for the country of ‘Pridain’.
[The rainbow sphere indicates a certain energy generated while we held a ceremony with lanterns and roses.]