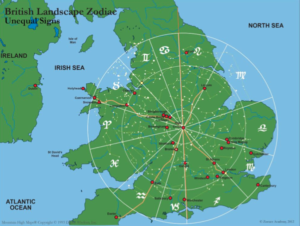 North Wales and the message of Aries (warrior pioneer, passion of purpose developed through the Libran ‘diplomat/mediator ’challenge: the advantage of knowledge and skill versus power and strength is found as the key to the mythology of King Arthur in this landscape. Here is what we can discover about the ‘Giants ’ Dance ’and the ‘Well of the Saints ’just off the A5? We follow local contact Jane Knight’s explorations along North Wales landscapes, with great appreciation. She recounts: ‘A few years ago I stayed at a cottage owned by a friend opposite another St Beuno’s church in NW Wales. It was part of the Beuno’s pilgrimage route which I think went to Bardsey Island where I also stayed overnight on that stay.' 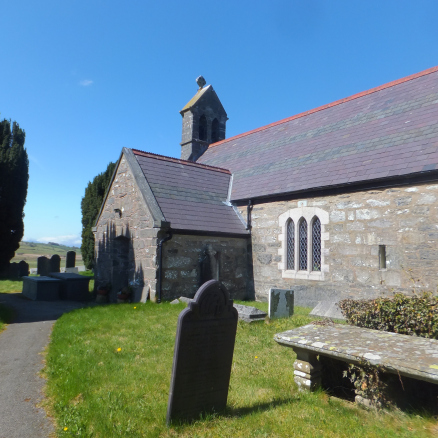 Church of St Mary Magdalene Cerrigydrudion, near the ‘Giants Dance ’stones.
The latent energies of the stones are believed to be ‘harnessed through the spoken voice with incantation and magecraft, the melody of song as with the Musical Strains utilized by the College of Bards or with the use of actual tactile sensation as with the channellers of the Geomancers'.
https://starofalbion.co.uk/the-giants-dance.html
https://wellhopper.wales/2012/12/30/ffynnon-y-saint-llanfihangel-glyn-myfyr/ 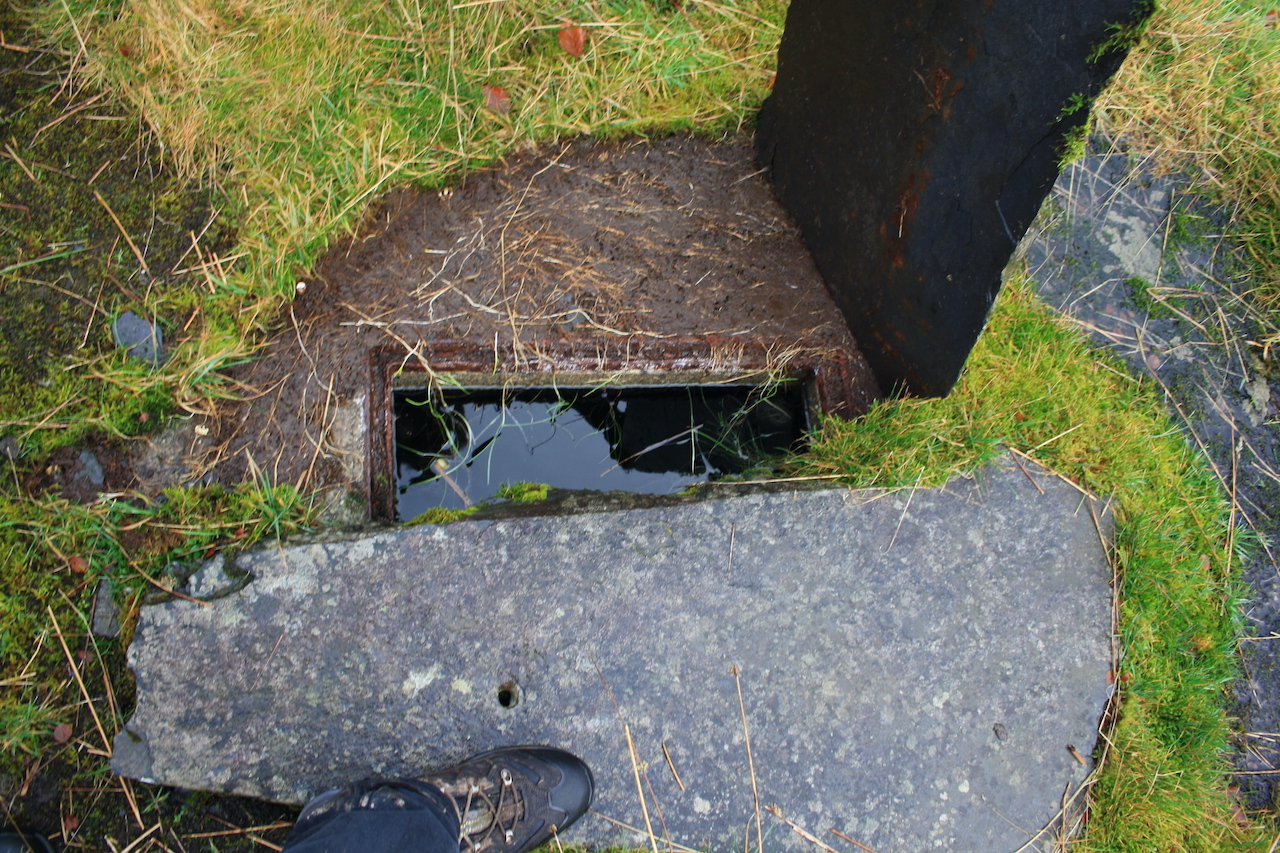 Well of the Saints near St Michael’s church 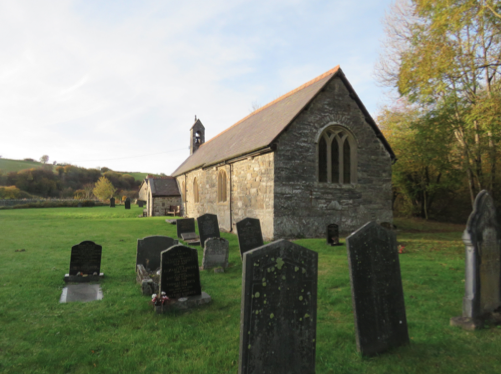 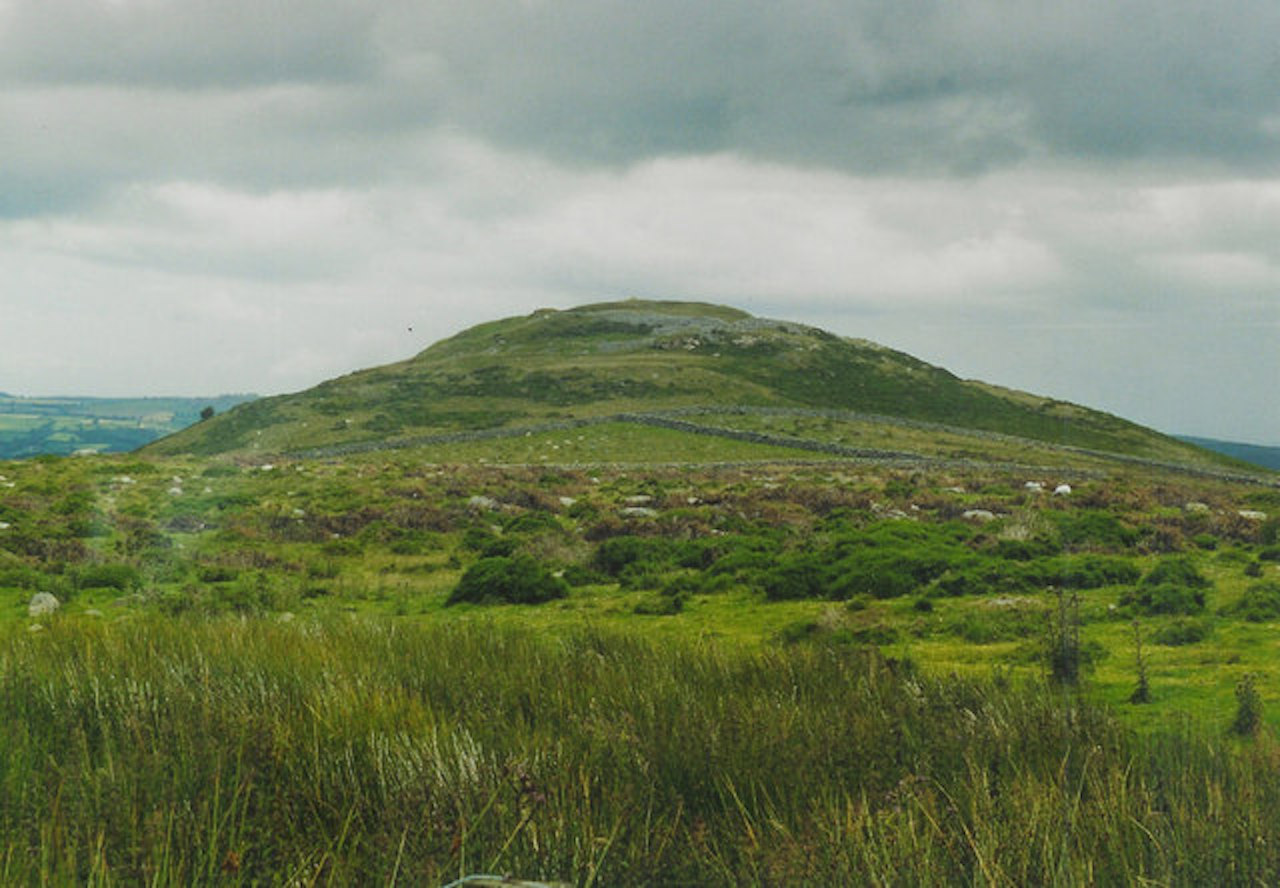 Nearby is Caer Caradoc (Pen-y-Gaer) - a hillfort with a large boulder ‘how did it get there’ wondered one visitor: https://www.themodernantiquarian.com/site/11398/caer_caradog.html.

The large boulders (were they the original Giants Dance?) observed by Blake and Lloyd in ‘The Keys to Avalon’ were discovered in their travels nearby, at a place called Cor Saeson ‘the circle of the Saxons’ in a wide open valley: ‘we were greeted by mounds of large boulders dotted around the fields’ they commented (p.82). ‘We discovered seven of these mounds of enormous boulders, and then noticed something interesting: the geology of some of the stones was different from the local rock used to build stone walls.... on the hillside opposite Caer Caradog.'

Signs of the transition from the Stone Age monuments of the Ages of Taurus and Aries:

The prehistoric remains on or near Christian churches, indicates the early Druidic significance of wells, along holy pilgrimages that followed prehistoric enclosures that honoured ancestors.

Many were named after St Beuno, with a link to pilgrimage routes further away, such as Culbone Chapel, Somerset. Thus the traditions along the A5, linking with Irish saints and the Giants Dance stones, enhanced cultural values of sanctity throughout Britain. 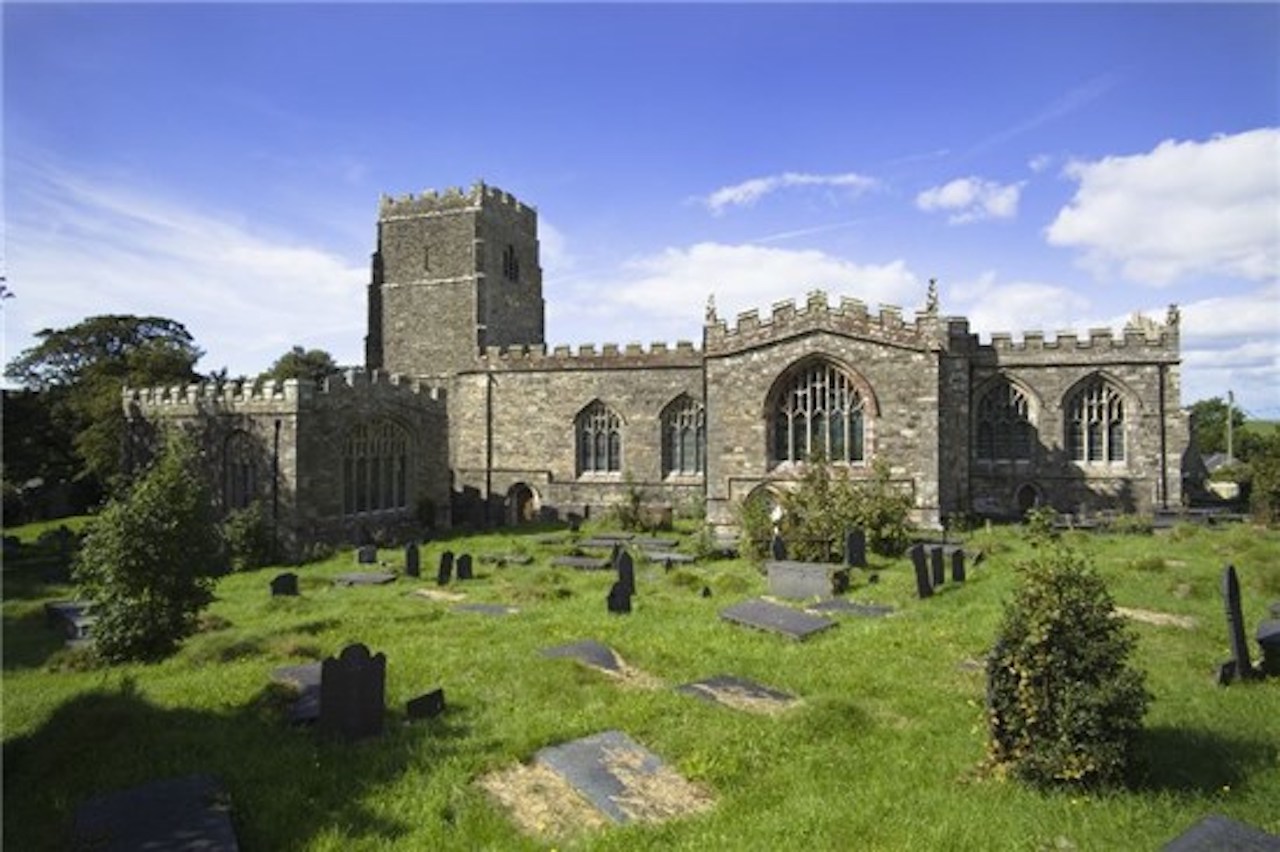 St Beuno’s Church Clynnog Fair - ‘St Beuno lived in the 6th or 7th century and founded at Clynnog Fawr a clas, an institution of the Celtic Church which was somewhere between a monastery and a college.’ https://historypoints.org/index.php?page=st-beuno-s-church-clynnog-fawr 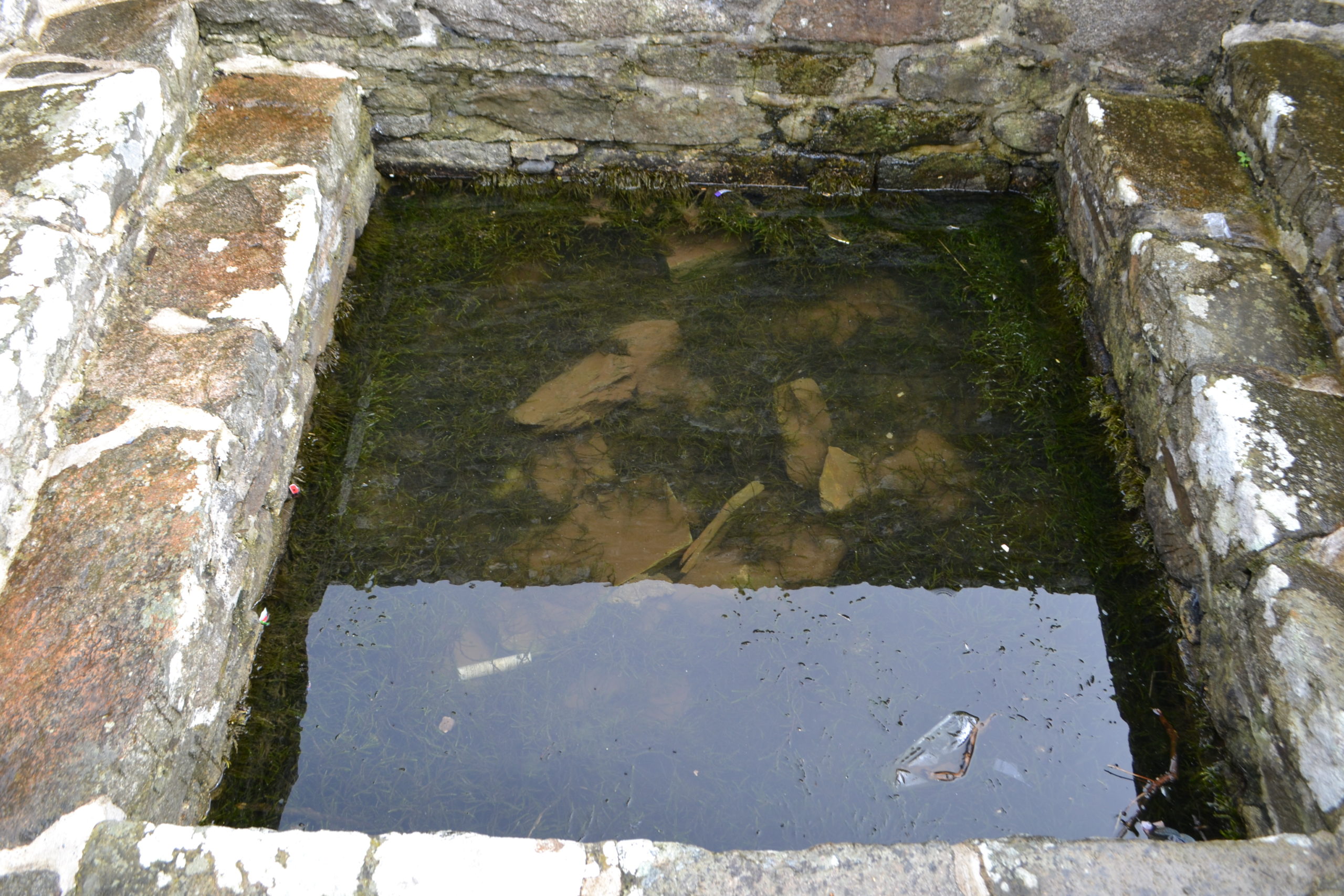 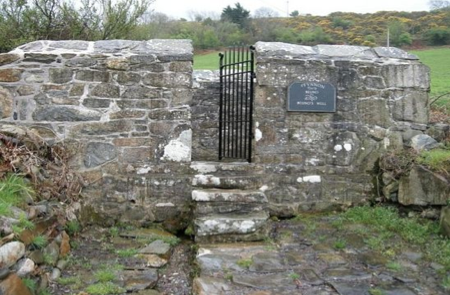 ‘...today by the door is a large sarsen stone possibly part as perhaps Beuno’s stone, of a megalithic monument. What is even more curious is the tradition of St Beuno’s cattle. These were cattle with ear markings which were slaughtered and offered to the saint to ensure well-being of the stock. This was later replaced by monetary offerings based on the sale of livestock and the chest, Beuno’s cyff, remains within the church. The money being used for the poor. The ‘sacrifice ’of stock is clearly very resonant of pre-Christian practises and perhaps the area was dedicated to a deity visited for such wishes.

St Beuno’s Well can be found just south of Tremeirchon on the B5429. A high stone wall surrounds a large rectangular pool some 4 feet deep that is fed by water constantly bubbling up from the ground.

The Christian movement said to have begun with Joseph of Arimathea in South Wales, spread through saintand hermits, many of whom were earlier Priest-Kings of Prydain.

More importantly, the Celtic tradition laid down the ‘royal roads ’that we taken up by the Romans, the A5 being one that linked the heart of Britain with that of Ireland through the lives of kings, warriors and saints.

The vision quest for modern pilgrims in an age of transition from Pisces to Aquarius:

Within us our ‘inner warrior ’self is being put to the test, to evolve courage and ‘mental precision ’in mediating between our vision and its practical embodiment. Thus Libra and Aries play a dual part in training our psyche in the art of creative collaboration. How do we build connections between like minded visionaries, in order to ground a vision of peace, harmony and beauty between us and Nature?

The esoteric tradition of learning wisdom is the test of ‘beheading ’or the surrender of the ‘brow chakra ’to the root chakra in service to Life and Love. Within the traditions of North Wales we have a good example of the discovery of ‘the giants dance’, and burials of 40 warriors. This happens along the cusp of Aries and Taurus, where the A5 runs from ... to High Cross, and then down to London. The myth of the head of Bran the Blessed being carried along this road, spells out our own initiation path: Bran was the initiate whose head was transformed into something else, by being buried at the ‘White Hill’ - the Tower of London. His service to the land and the people of his country was of building a new ceremonial temple, on sites already established. Roman temples were built upon these sites: the Temples to Diana (St Pauls Cathedral) and Apollo (Westminster Abbey).

North Wales and King Arthur appeared in ‘The Keys to Avalon ’by Steve Blake and Scott Lloyd, along with Merlin and Emrys in connection to the Giants Dance of huge rocks. The authors discover these rocks, on the road to Hollyhead, near 40 burials – these linked to a story of a bloody war in which many warriors were slain. Nearby is St Mary Magdalene’s church, built in a circular churchyard, that they identified as the site of the Monastery of Ambri where the stones were buried. They are found near the hill fort of Caer Caradog and were said to be healing stones, when water is collected from them and used to cure maladies.
Merlyn is the only one who can raise these stones, after warrior tried and failed. So when Merlin proceeded to do so with ease. ‘everybody present realised that knowledge and skill were stronger than power and strength’. Were the 40 warriors connected to the ‘Well of the Saints ’at St Michael’s Church Llanfihangel Glyn Myfyr and connected to the Cor Season field of boulders?

We have now completed the AGE OF AQUARIUS in 2022 as Uranus makes its home in Taurus bringing potent creative power to earthly things. Thus we are told by astrologers that the start of the Aquarian Age has already begun over the last couple of centuries. WALES as ‘pioneering landscape’ holds an astrological/hermetic meaning in that the Age of Pisces started with the visit of the Holy Family. Across the Bristol Channel on the cusp of Pisces, the saints can be found in Somerset, Devon and Cornwall. Aquarius being the next 2,000 yr cycle, was populated by the same saint-hermits with their hermitages. It seems that Glastonbury was founded as a 2,000 yr vision, incorporating a myth of King Arthur, by the construction of twelve hermit huts by Joseph of Aramathea. Thus the ‘star map’ of Prydain began to be travelled and turned. Disruption is the sign of a new dawn, and out of the landscape comes new vision, rooted in the pre Piscean Stone Age monuments.

A NEW STONE CIRCLE FOR AQUARIUS: The greatest of these is Stonehenge, whose Blue Stones have been traced to Waun Maun in the Presceli Mountains, Wales. In addition ‘Bluestone Henge’ has also been discovered this year 2022: https://archaeology.co.uk/articles/news/bluestonehenge.htm

‘Archaeologists believe the stones represented the end of the Avenue that marked the funerary processional route from the River Avon to Stonehenge: no pottery, animal bones, food residues or flint tools associated with domestic life have been found at Bluestonehenge.’ At the end of the Avenue, it was where the dead began their final journey, linking with the larger main circle of stones.’ ... ‘“The newly discovered circle and henge should be considered an integral part of Stonehenge rather than a separate monument, and it offers tremendous insight into the history of its famous neighbour. Its landscape location demonstrates once again the importance of the River Avon in Neolithic funerary rites and ceremonies.” 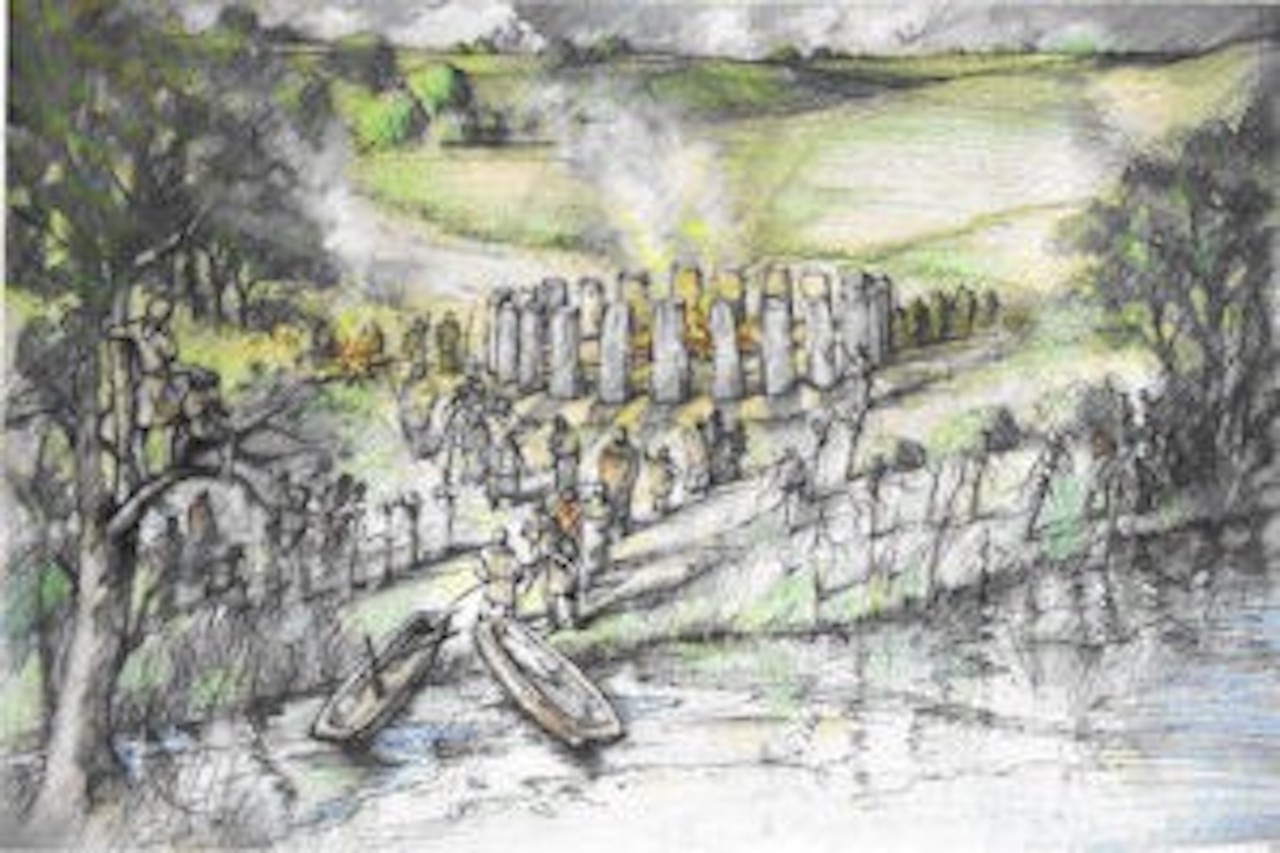 ‘Soil that fell into the holes when the stones were removed was full of charcoal, showing that plenty of wood was burned here. https://www.manchester.ac.uk/discover/news/blue-stonehenge-discovered/

In honouring our ancestors, now is the time to understand a very deep significance between all our stone monuments and the changes we are going through into an Aquarian Age. Stone monuments are considered art to be cherished, and modern interpretations bring us into a new creative understanding of the past.