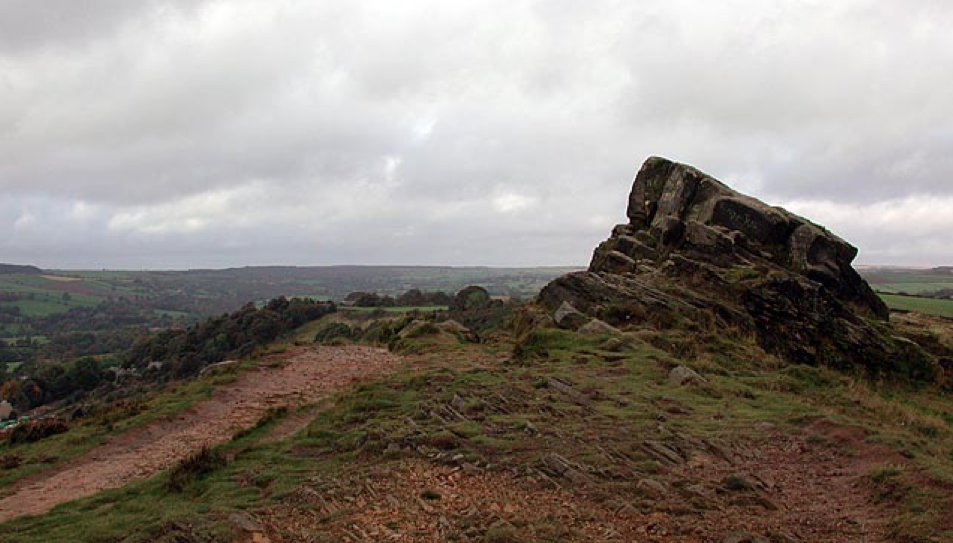 The Fabrick or Feebrick is a prominent landmark in NE Derbyshire from which 5 counties are visible. It is an outcrop of millstone grit which faces over a landscape that is the remains of a volcanic vent. The earliest illustration of the rock by antiquarian Major Hayman Rooke shows that it was enclosed by an ancient stone wall and other stones. It looks over the often boggy River Amber valley into which there is a man-made cave cut into a small cliff face. From its entrance the rock appears the most prominent feature looming directly above. One wonders what time of year the sunrises behind it from this viewing point and also in which part of its cycle does the Moon.

Although there are no legends recorded about the rock itself, to the South of it is an area known as Eastwood Rocks where it is said Robin Hood and Little John had an archery competition. Robin’s arrow fell at Robin Hoods Mark, an outcrop which was described as a rocking stone between Overton Edge and Cocking Tor less than a mile away, whereas Little John's arrow hit Robin Hoods Stride near Harthill many miles distant and not visible from the area. What is this legend describing? The earth energies connecting places or celestial events of importance? A glance at an old OS map also shows other mysterious named stones one which is alleged to turn.

Ashover also has evidence of neolithic rock art which was found when the local school playing field was being drained and is displayed in the school pond area. There are various cup marks and early graffiti on rocks overlooking the settlement and underneath are remnants of old lead mines from medieval times on which the village fortune was created. The font in the church is one of the few left in the UK made of lead and displaying biblical figures. Also arising from underground are warm water springs which led to the development of spa houses in the 18th and 19th centuries.

Although the landscape has also been disrupted by quarries they are now being absorbed by nature. The parish is must to visit, to dowse and to seek inspiration.