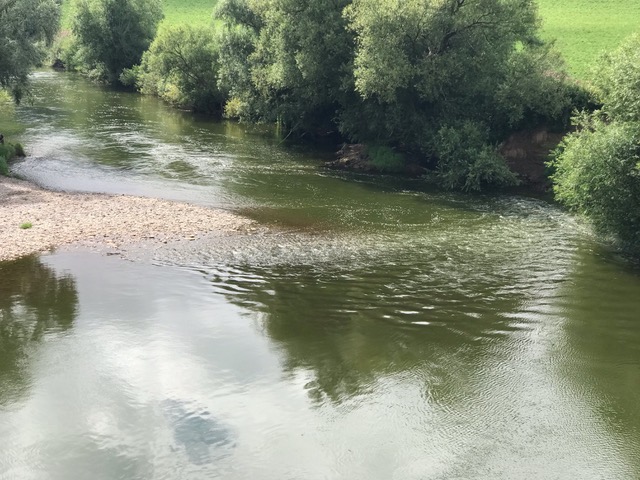 In the last newsletter I wrote of the month-long pilgrimage along the River Wye. People carried spring water from the source at Plynlimon to the sea at Chapel Rock between the two Severn Bridges to highlight how much the river has become polluted. I mentioned how the name Kerne was related to corn and have since found out that this small hamlet was originally called The Cweorn after the stone corn mill that was operated there. It later became known as The Quern and then, when the current bridge was built, Kerne Bridge.

On 25th July, one week before Lammas, I led the section of the pilgrimage from Kerne Bridge to Lydbrook carrying the water that had been carried all the way from the source of the Wye. For the rest of the week, it was carried down through the Forest of Dean alongside the river until it reached the sea where it was offered, or given, to the Severn Sea in the state that it should be - pure and unpolluted. This happened on August 1st, the traditional day to celebrate Lammas.

With all pilgrimages there are always threads that need tying off in order to ‘close’ the ceremony. I had dreamed on Lammas eve that I had returned to Kerne Bridge and scattering something in the river (we had offered some seed to the river the week before, before our leg of the pilgrimage started). The next night I dreamed of walking on either side of the river, again at Kerne Bridge. There were two more dreams that week, one crossing the bridge back and forth with a group and the other telling me that rather than the river cutting into the land there, the land had deflected it onto another course. Land and river as impulse.

I had decided to return to the Bridge on the weekend of astrological Lammas on Saturday 7th but in conversation with one of the original group, changed it to Sunday 8th morning, to tie in with the very end of that moon phase over this time. There was a New Moon in Leo on 8th at 2.50pm. Even more important to tie up the threads of the Walking with the Wye pilgrimage before the New Moon turned from decay to growth.

These ‘end’ pieces of spiritual work are often neglected and as a result, places on the land can feel a little unhinged or as if the humans have taken what they needed and not thanked the spirits for helping them. My mission, led by my dreams, was to return with some of the core group who had opened up the whole project, on a spiritual level, back at the New Moon in April. At that time, we had visited an ancient oak that feels like a guardian of the land where the river enters the Forest of Dean and offered it some gold leaf. We also offered the river some local spring water imbued with gold leaf, poured in from both sides of the bridge. My dreams suggested many back and forth movements: we needed to attend to both sides of the bridge and river, crossing the bridge back and forth, going upstream so as to balance our previous walk downstream, visiting another ancient oak on the other side upstream from the bridge and then returning to scatter the remaining spring water from our April visit to Kerne Bridge. Having led my section of the pilgrimage a week before traditional Lammas and the month-long pilgrimage finishing at the point of traditional Lammas (1st August) it was now necessary to mirror this a week later with another pilgrimage at astrological Lammas. Lots of crossings, balancings and mirroring mostly induced by dreams. 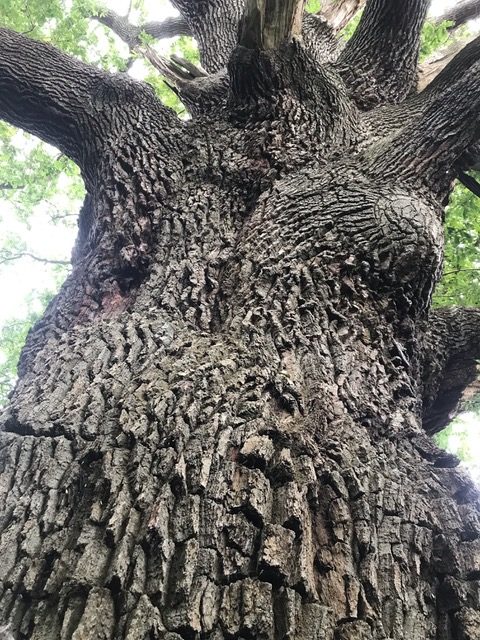 Such a potent time deserves a considered approach. On the day of astrological Lammas (Saturday 7th) I began to write this piece and in doing so reflected on what had appeared during this year to try and find what the river and the land would like as recognition. It occurred to me that in the last of my dreams about Kerne Bridge this week I was shown how the land had deflected the river. This got me pondering on offerings for the land. I had made a small corn dolly, or Kernababy, in preparation for an online course I had been running over the Lammas weekend. The corn dolly has mysteriously ‘disappeared’ during the weekend although I had wanted to offer it to the south west direction of my garden during the course. It then resurfaced a few days after Lammas. I knew there was something afoot and it then dawned on me that I needed to offer the corn dolly to the land at Kerne Bridge . . . and water from the spring that I had kept since April to offer to the river.

On the day we crossed over the bridge then crossed under it and sang to the river stating our intentions, a tying up of threads of the Walking with the Wye pilgrimage. We walked upstream to the other grand and ancient oak, passing a series of old oaks on the way. After gawping with wonder and trying to give the oak a group hug (it was too big for us to reach each other round its trunk!) we then made an offering of the corn dolly - Kernababy with a hat of gold leaf which fluttered in the breeze along with the oaks’ green leaves. 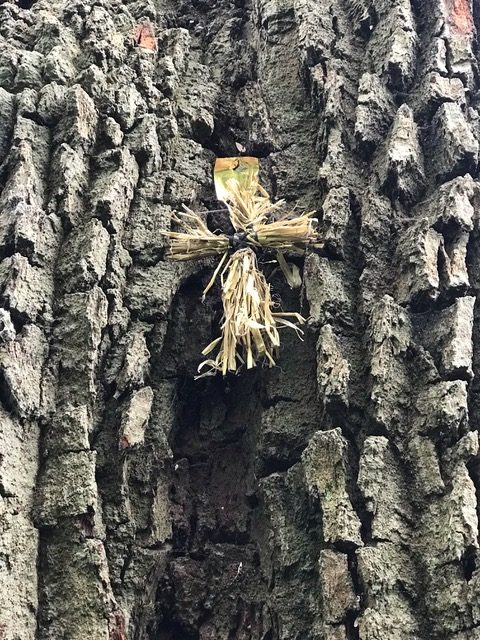 After a small lunch we made our way back to the bridge, we went under the bridge, sang to the river again and offered the spring water. I did this by pretending to throw the bottle out over the river and what happened was the spring water sprayed out in many drops and in that moment I realised that it was like the scattering of seed which we’d offered the river two weeks previously and I had dreamed this very act.

Then we went up onto the bridge and released more gold leaf, the final one crossed to one side then flew back towards us and finally floated down to the other side . . . gold leaf forming the final crossing and a sign from the land and river that our efforts had been acknowledged.

So the pilgrimage was finished and sewn up . . . although the raising of awareness continued the next day with a swimmer towing a coffin down the river at Ross-on-Wye - a symbolic gesture of the river dying. 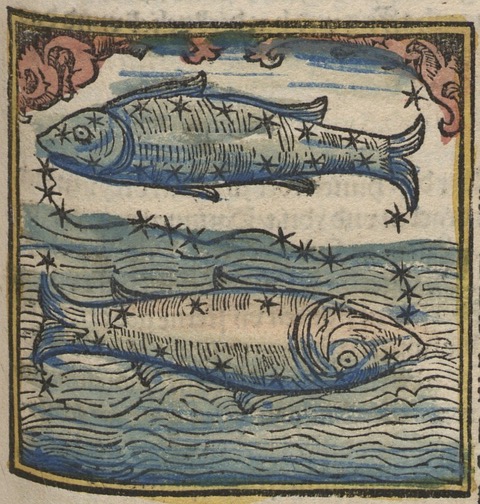 A final note, I work with the Pisces segment of the British zodiac. Pisces is represented by two fishes swimming back to front with a line joining them together. It is ruled by Neptune, the planet most closely linked to the dream world. In the old painting below, one fish appears to be ‘out of water’, by that I believe it to mean either in the air or on land, whilst the other is below the surface of the water. This pilgrimage work has seen the same, we have worked in tandem with both river and land. I can’t think of anything more fitting to illustrate all the crossings, mirroring and balancing that has been involved in these last three weeks.

Mandy Pullen
Local Contact for Forest of Dean and Monmouthshire, and Pisces.
info@ecoshamanism.org.uk