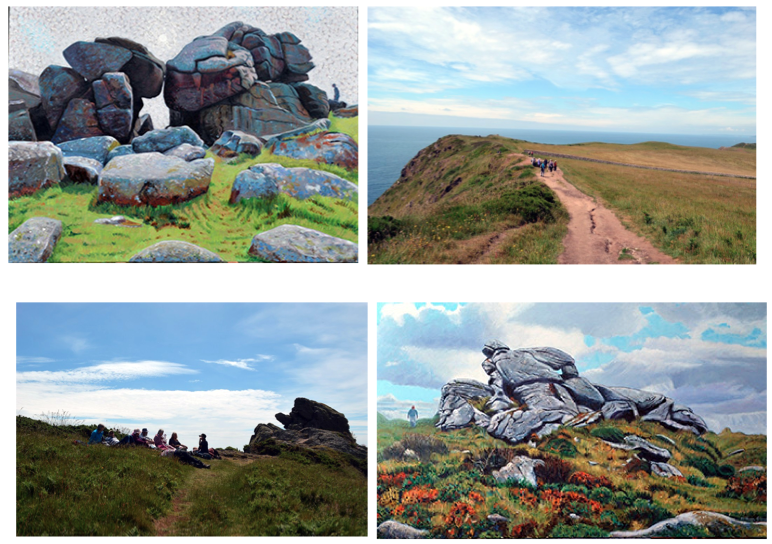 Capturing the spirit of the landscape on a midsummer Pilgrimage in 2021
to White Lady Rock, on the Guinevere Line, S Devon.
[Photos and paintings by Arthur Glendenning, 2021] 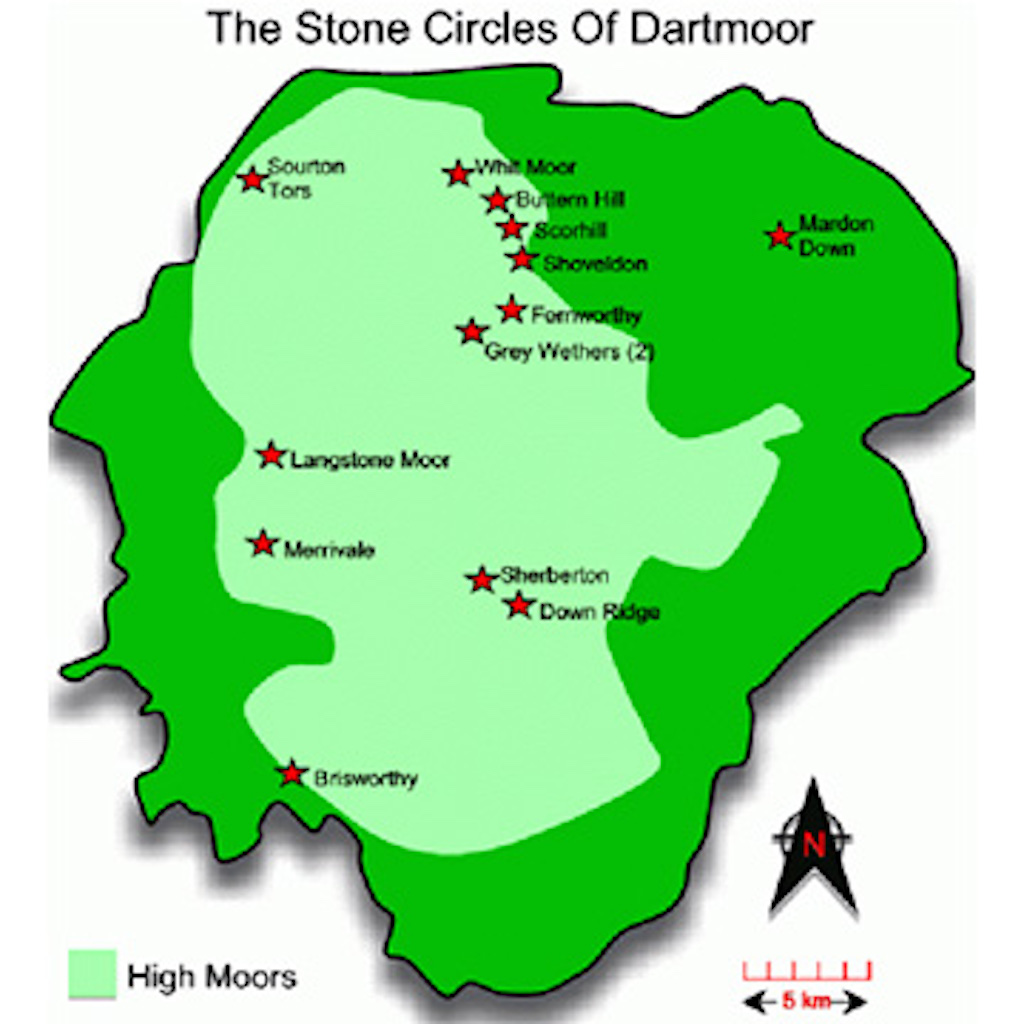 ‘THE SACRED CRESCENT’ of stone circles in Dartmoor can be found the proposed sign of Cancer in the landscape zodiac - is it our ancestors’ symbol of the spirit of the land, symbolizing emotional richness, nurture and guardianship?
www.legendarydartmoor.co.uk/sacred_crescent.htm
and www.ancientenigma.co.uk 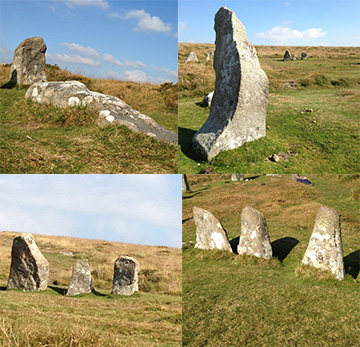 Scorhill Circle which contains four sets of three-rock clusters,
and seems to symbolize the ‘crab’ of Cancer with its protective
shell in the shape of a crescent moon (ruler of Cancer). Star constellations and myth
seem to be encapsulated in the Dartmoor Zodiac.

What qualities does Aquarius represent that might help us tune into the spirit of the land for our full moon celebration? These images above capture the pilgrim experience in different ways. The sketch map of the Sacred Crescent is complemented by an OS map, together with a composite of Scorhill stones and interpretations of the ‘Goddess of Dartmoor’. All these versions go towards building a modern identification with the spirit of the land through pilgrimage in two modern ‘goddess’ stories. We are re-creating the spirit in the land through art, technology, group intuitional research and reminiscence.

Strong planets are now entering Aquarius (Creative and visionary) and Taurus (the Earth wisdom), strongly supported by the major influences of planets Saturn (discipline and discernment) and Jupiter (expansive, generous and affirming wisdom). Some feel we are on the edge of the ‘new age’ of Aquarius, which means that its qualities affect us: creativity and collaboration, new commitment to humanitarian values, and the strength to begin putting these into practice. The ‘Sacred Crescent’ shows how local rites of passage and communication between communities were practiced in collaboration with the landscape co-creating a collective wisdom and cultural unity are signatures of Aquarius. As we enter a new age, expansive hearted Leo inspires us to collaborate with all living beings creatively, both invisible and vividly present, as we spin new mythologies of a living earth: honouring a living planetary spirit, Gaia.

‘THE GODDESS OF DARTMOOR’: Lately what some call the ‘Goddess of Dartmoor’ has shown her face, and we are excited to explore pilgrimage as a journey into an imaginal world of connected sanctuary sites, honoring the nature beings and the underlying spirit of the land. A central point for the crescent, and – other stone circles in Dartmoor - appears to be Hangingstone Hill, where a rocking stone and two cairns were held in high regard by ancestors worshiping their ‘goddess’. It served as a ‘hub’ for their geomantic knowledge and energy working along the lines of intuited divinity: the wisdom and beauty of perfect mathematical proportion. Their goddess WAS an inner experience of sacred geometry in Nature.

This array of stone sites in includes Scorhill, and a line connecting to Spinsters’ Rock at Shilstone further East. [see John Michel’s book ‘The Traveller’s Guide to Sacred England’). Bill Wilkinson analysed the angles and distances with both megalithic and imperial standard measurements. 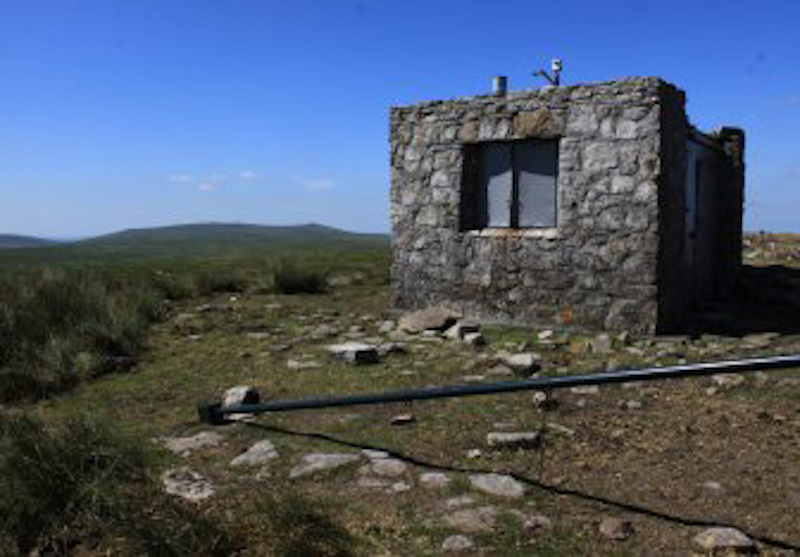 Hangingstone Hill cairn and outpost for the military.
www.legendarydartmoor.co.uk

Hangingstone Hill contains two cairns and a rocking stone, which from time to time slips and ceases to rock. This hill forms the pivotal point for radiating lines to the ‘Sacred Crescent’ a semi circle of 8 stone circles which are virtually equidistant from each other and from their ‘hub’ or axis point: 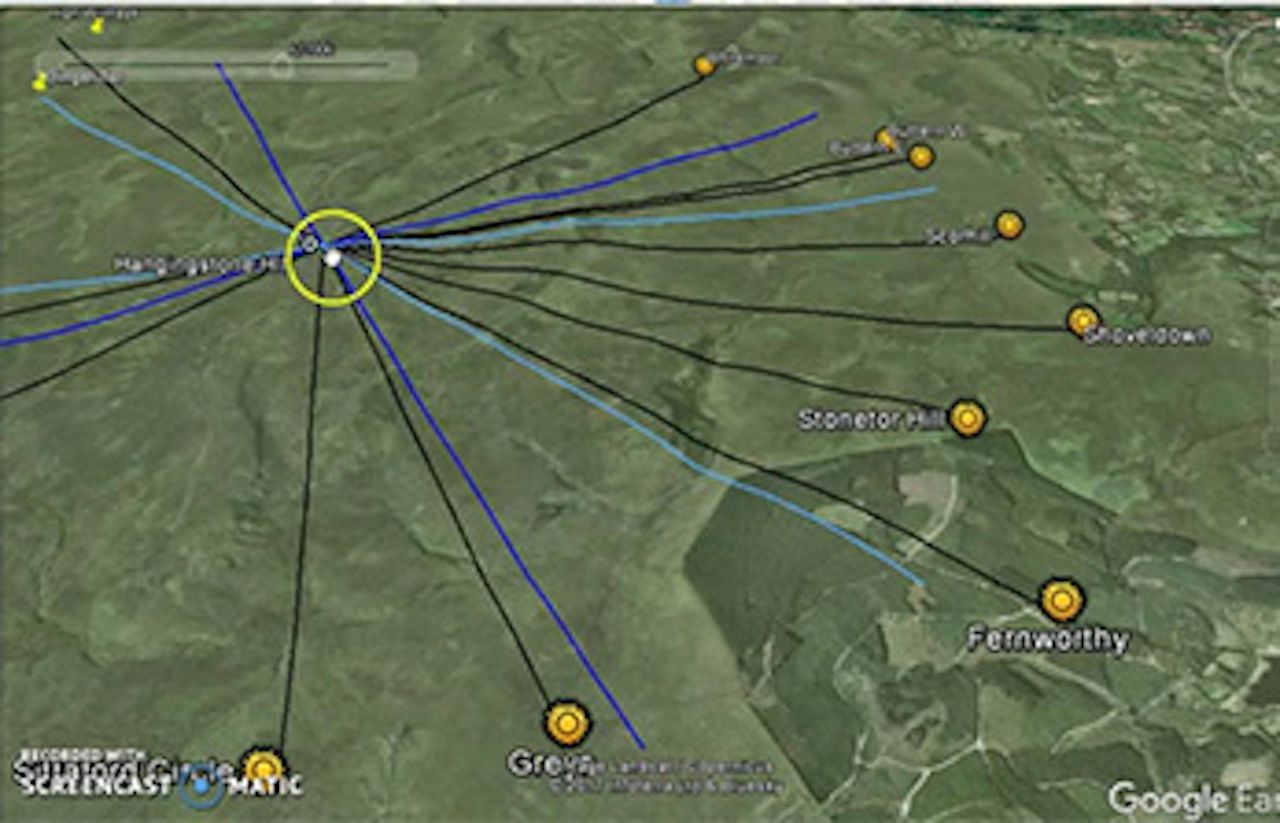 Bill Wilkinson’s meticulous measurements include distances between Hangingstone Hill, Scorhill circle, Spinsters Rock and Wiltshire monuments such as Stonehenge. His precise measurements used both megalithic and imperial standards, which he represented through using Google Earth. This shows an interconnected array of sanctuaries across Britain carrying similar measurements and alignment with the sun and stars.

From Hangingstone Hill, what looks like a circle of stone circles almost equidistant from the hill, suggests that ancient peoples had a method of measuring distances and creating symbolic representations of their beliefs in the landscape. The notion of the heavens being populated by heroes gave birth to the study of astrology and its intuitive interpretations as guidance for individual lives. 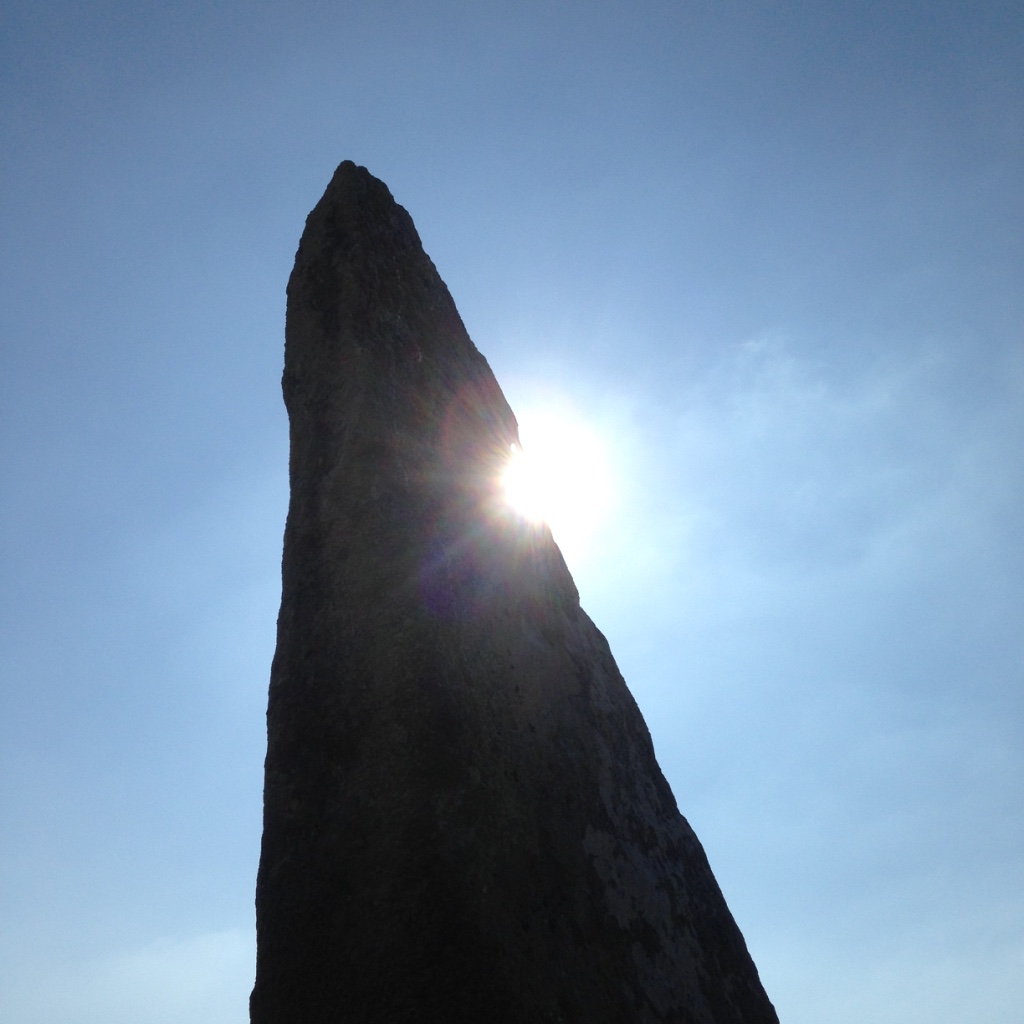 A key stone in the Scorhill stone circle challenges the sun. Did it rise one midsummer in the direction of Hangingstone Rock? [photo by Charlotte Yonge 2016]

Our ancestor’s intuitive sense of design and proportion is shown in the elegant design of stone circles. This is now measurable on modern maps and our stories build up collectively on the internet with shared images, poetry and reflectios. In earlier days however, personal mapping of local environments relied on sacred rites and goddess worship, enabling intuitive magic to inform human intellect of the divinity of the earth. Stories were passed on, defining boundaries and orientation of energy routes and connective lines (leys). Now we accept an ‘official’ map for our sense of identity, although now as Gatekeepers we are building our own local landscape maps and placing significance outside our back door, new stories are being told. We love our land and seek to heal and bless it. 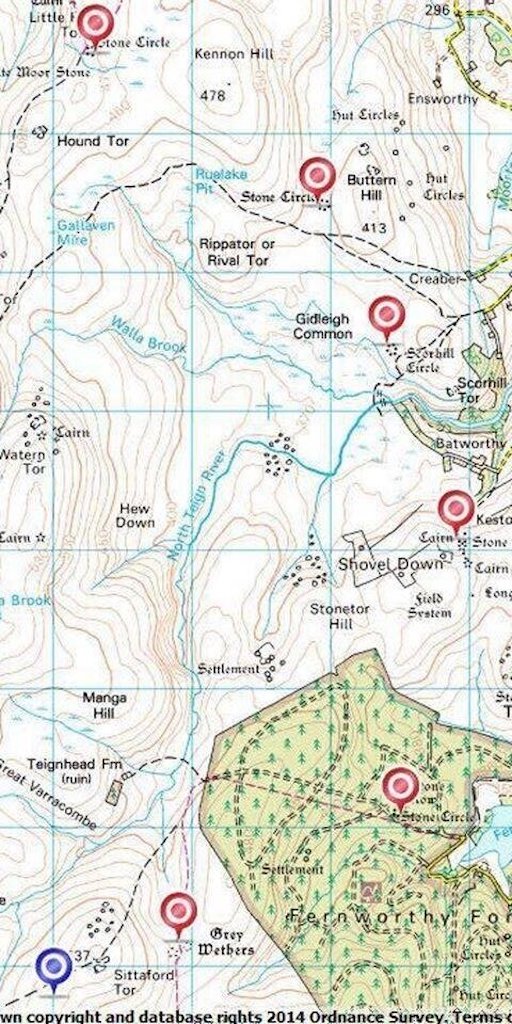 The ‘Sacred Crescent’ mapped with modern imperial measurement [https://www.dartmoorsdaughter.com] – we now create our own pilgrims’
maps with our own interpretation of the spirit of the lands (the ‘goddess’ of our ancestors).

‘In 1779, a writer called William Chapple considered that the name ‘Spinsters’ Rock’ derived from the Celtic phrase, “Lle Yspiennwr rhongoa,” which is translated to mean, ‘the place of the open observatory ‘or ‘the open star gazing place’. [www.legendarydartmoor.co.uk/spinster.htm]

The name relates to Norse mythology where evidence of Vikings were found in Exeter nearby. However, time and circumstance have rearranged the earlier complex’s ‘perfect design and proportion’ of our ancestors’ avenues and circles:

A member of the South Devon group writes about a research visit to Spinsters’ Rock and was amazed to find that the only remaining stones are a cromlech. within an eye witness account of a huge megalithic equates to the circles, avenues and cursus at Stonehenge. The remains of the larger complex had been removed by local farmers, see the sketches below.

Sketches from Rev. Grey in the 19th century, before stones were removed, given to local antiquarian and geologist George Wareing Ormerod, depicting the layout of the stone circles from his observation. The cromlech is marked to the east of the circles while Bradford Pool is shown to their north-east.
[[© John Michel ‘A Traveller’s Guide to Sacred England’ 2003.]
https://www.devonperspectives.co.uk/spinsters_rock.html]

Richard Polwhele reports [6, Vol 1, p150] “Towards the west of the cromlech I remarked several conical pillars about four foot high. On the fourth side there are three, standing in a direct line from east to west. With respect to columns erected on a circular plan, the number of stones erect are various. The distance of the pillars from each other is different in different circles, but is the same, or nearly so, in one and the same circle.”

Rev. W Grey observed in 1872: “Wednesday, 4th July, 1838. Visited from Moreton the Druidical circles above the cromlech. The cromlech lies in a field about 110 yards to the east. There are two concentric circles of stones, the inner circle having entrances facing the cardinal points, that to the north being sixty-five paces in length and five broad. The outer circle, besides these, has avenues diverging towards north-east, south-east, south-west, and north-west. A smaller circle seems to intersect the larger, of which the avenue eastwards is very evident.”...

So it is moving and inspirational that we have first hand observations for our mystery landscape, surviving time and circumstance, and now appearing significant for its connection to other sanctuary complexes. For millennia the stone sanctuaries of our ancestors marked places of 'sacred geography' where the energetic insights into individual 'chakra' centres and their associated organs and function were translated into the landscape in patterns that connected with special meaning to the star constellations of ‘heaven’ and legends of the heroes and gods of myth (bringing heaven on earth). Today we investigate the archetypes within our own psyche, in order to make our own subjective map-stories of our significant memories and inspirations direct from Nature Herself.

The Gatekeeper pilgrim group’s activities in South Devon. Dartmoor - Aquarian landscape have involved great integrity of group collaboration: using intuition, attunement and balanced sharing of research and insight. This is being inspired through the spirit of Dartmoor, a feminine over-soul which is also reflected in the group’s out-reach research and pilgrimage, especially along the Arthur and Guinevere Line linking Cornwall and Devon.

The goddess theme emerges in other places in the S Devon pilgrimage programme, such as the visit at midsummer 2021 to White Lady Rock and the landscape of the ‘Arthur and Guinevere line’ from Bodmin [See more about the Arthurian legend in Bodmin: https://ztevetevans.wordpress.com/2015/04/01/legends-about-dozmary-pool-on-bodmin-moor-cornwall] to the South Devon coast. One pilgrim comments on the wonder of witnessing and helping the divine feminine (White Lady Rock) to manifest in these days of change, seeing the masculine ‘Arthur Line’ (Bolt Head) being the protector and guardian of the feminine ‘Guinevere Line’ spiralling across the landscape together. 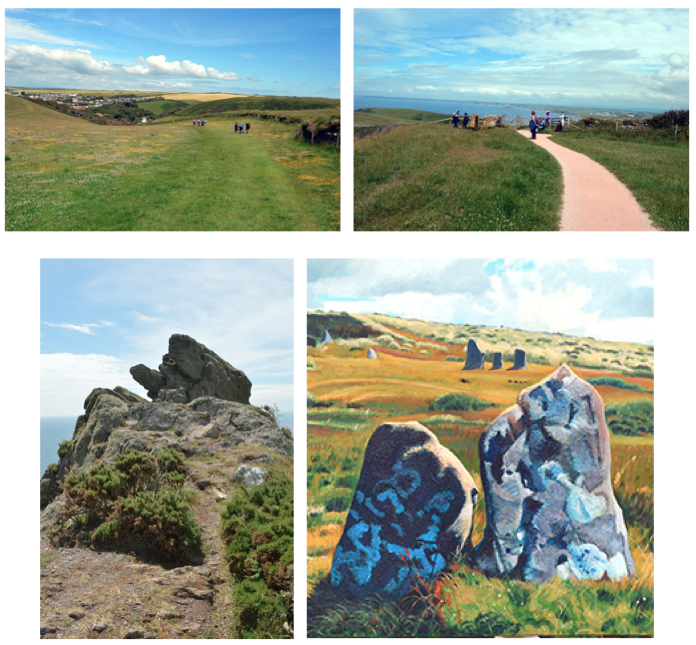