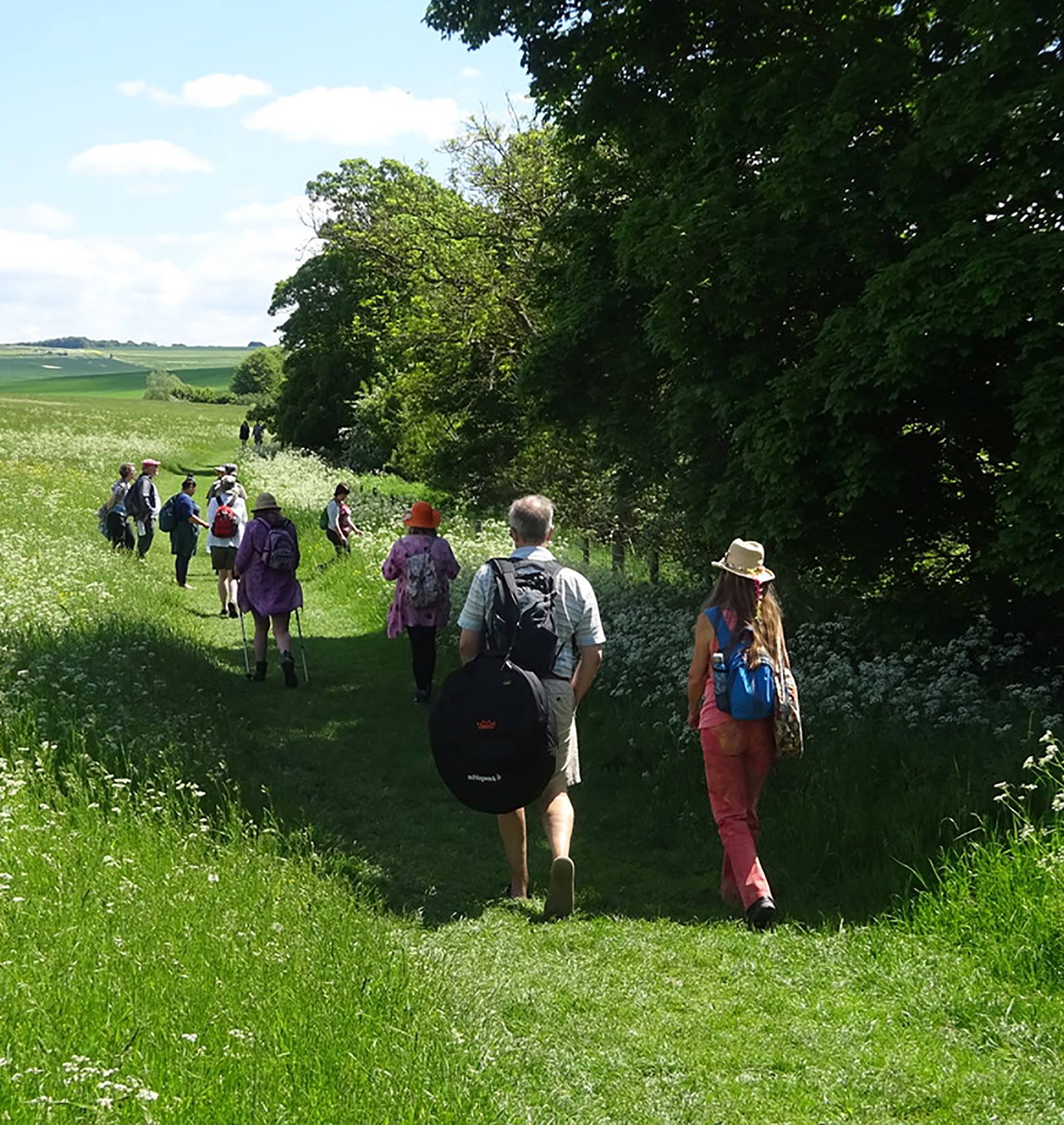 On Saturday June 5th 2021, Sue Wallace and Peter Knight (GKT Local Contacts for Wiltshire) facilitated a mindful-shamanic walk across the beautiful rolling hills of Wiltshire (which comes under the Capricorn segment of the landscape zodiac of which the GKT has been researching and walking). Thirteen pilgrims (including GKT supporters) meet at Avebury, with the intent of walking along the valley of the Winterbourne/Kennet, passing Silbury Hill, visiting West Kennet Long Barrow, and returning to Avebury via the southern avenue of stones.

The weather was warm and sunny, and we began the walk with us all kneeling as Sue led a connecting with the landscape. We then did a silent, mindful walk following the path alongside the stream, noting the sounds, scents and other sensations that the participants experienced. We then paused on a footbridge, within sight of Silbury Hill, as Sue reminded us of how vital water is to life on Earth, and how it is constantly being recycled and circulated, and of the spiritual, cleansing properties of water. We were all invited to ask permission to take with us a small pebble or piece of flint from a small beach on the riverbank. We did this with profound thanks.

Peter then explained about Silbury Hill, which rose magnificently out of the land before us. How this Neolithic wonder has no passages or chambers, and how it is symbolic of the pregnant tummy of the Earth Mother. In winter the fields around the monument flood, and the reflections complete the image of the Cosmic Egg. This is also the Orphic Egg, as the current of the Mary flow of the St Michael Line spiral, serpent-like up Silbury.

We then carried on along the valley, crossing the intrusive A4, before finding quiet again on the other side. We paused again on the small footbridge which crosses the River Kennet, watching the waters flow by on its way to the Thames, eddies in the waters causing balletic swirls in the underwater plants.

At the magnificent oak at the foot of the hill, we paused and looked up the ascent that would lead us to West Kennet Long Barrow. We were truly walking in the footsteps of the ancestors as we walked up the hill. 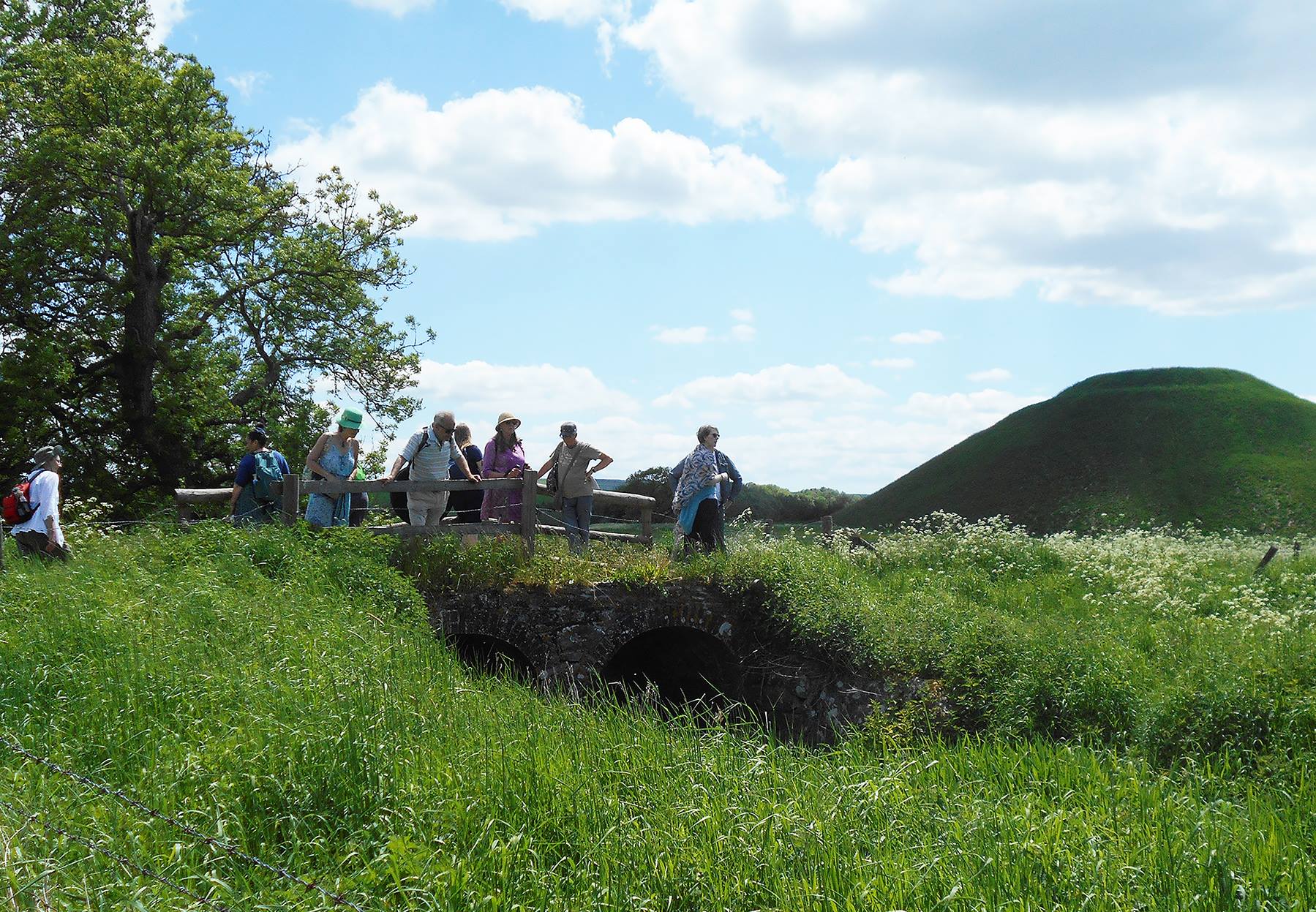 Up at the long barrow, we stopped to ask permission to enter this hallowed place of the ancestors, and called out a greeting to them. Outside, Peter gave some information on the archaeology, astronomy, symbolism, geometry, as well as the shamanic and funerary uses of the 5,700 year old Neolithic monument, based on his book, ‘West Kennet Long Barrow – Landscape, Shamans and the Cosmos’. He pointed out the huge vulva crevice etched into the huge blocking stone, which to him showed us that the feminine Mary current was surging through the chambered tomb. He also pointed out that several of the other, intervisible, monuments on the landscape denoted astronomical events when viewed from here, such as the midwinter solstice sunrise rising out of East Kennet Long Barrow, and the midsummer sunrise rising from round barrows on Overton Hill. Everything is connected and interlinked.

Then it was time to enter the interior. We passed under the dragon simulacra, which hung like a guardian over the entrance; this is a liminal space at the threshold, the passage from light to dark, known to unknown, living to the ancestors. We all found a space that felt right for us in the dark interior. Sue and Peter lead some gentle shamanic drumming, and some other pilgrims also had theirs to beat. Some chanted, some howled the spirit of the wolf, and Peter also gave a chant which was gifted to him in 2020: ‘Blood line... love line. Blood line... love line. Feel my love. Feel my love.’ This was repeated several times, and others joined in. We ended with another chant, called Returning: ‘Returning... returning... returning... to the Mother of us all’. Then a silence filled the chambers, and silence that reached back to the Neolithic. 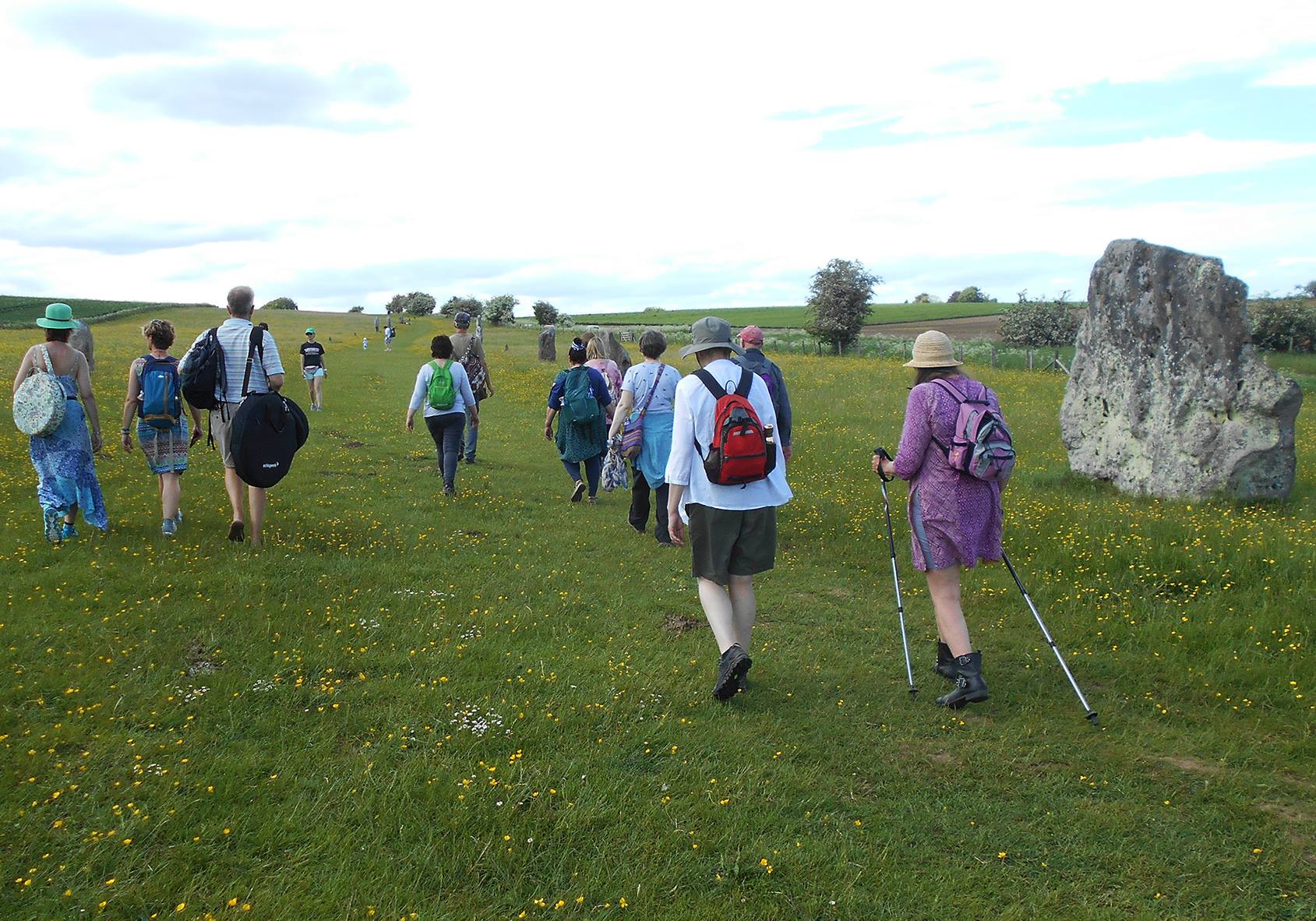 With grateful thanks, we left the barrow, descended the hill, before ascending Waden Hill, over to the Avenue, a double row of Neolithic megaliths that snakes it way to Avebury. This follows and channels the Michael current of the St Michael Line. When Avebury’s henge bank and stones came into view, the attendees all gathered around one of the Avenue stones as Peter and Sue gently drummed around them. 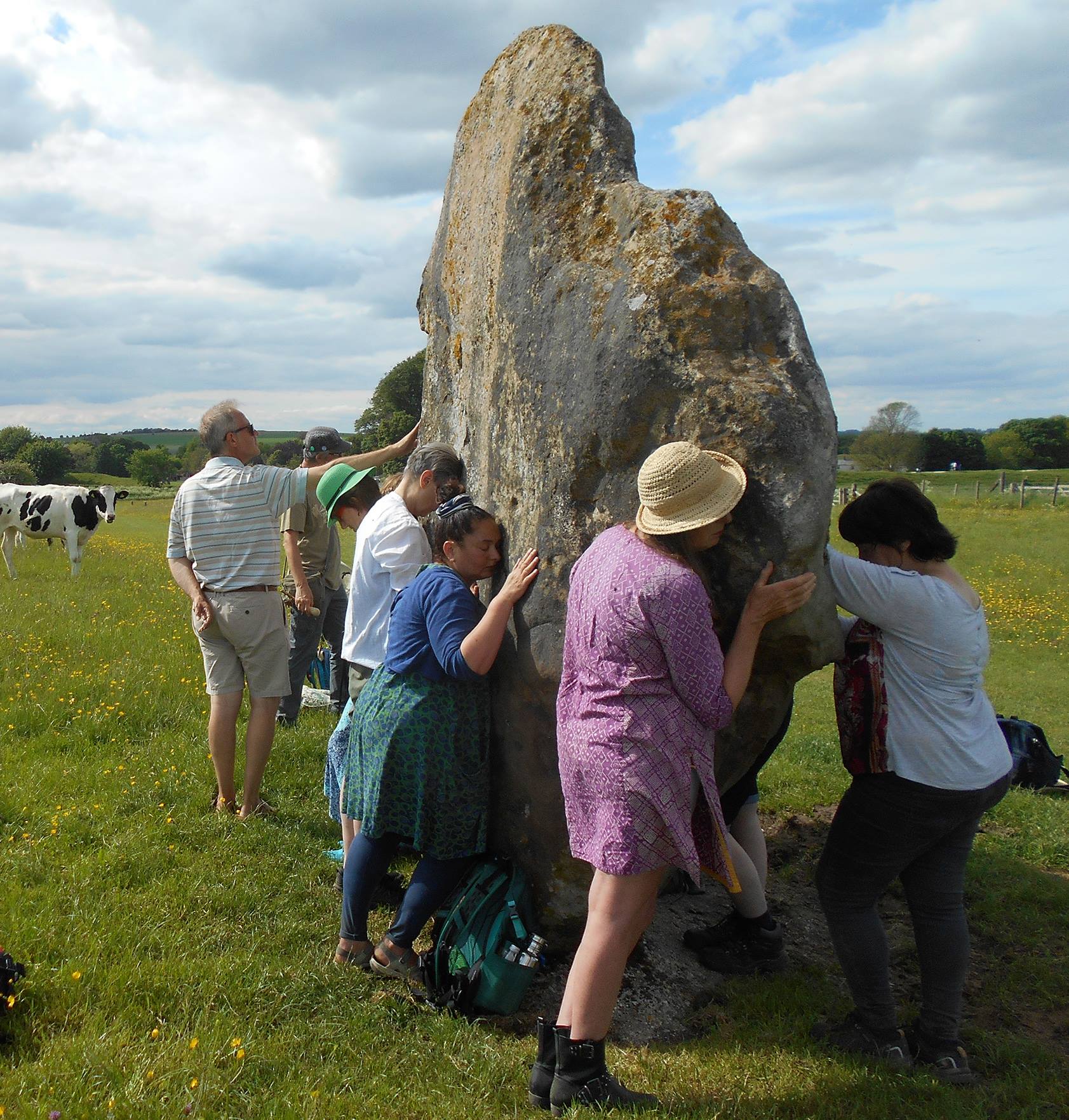 People connected, even merged, with the stone. We became one with it, and with the landscape. Our drumming also drew in some nearby cows! Perhaps they felt the love too. We were all truly blessed that day.

Please join us for more events this year.
Check out the website: www.stoneseeker.net