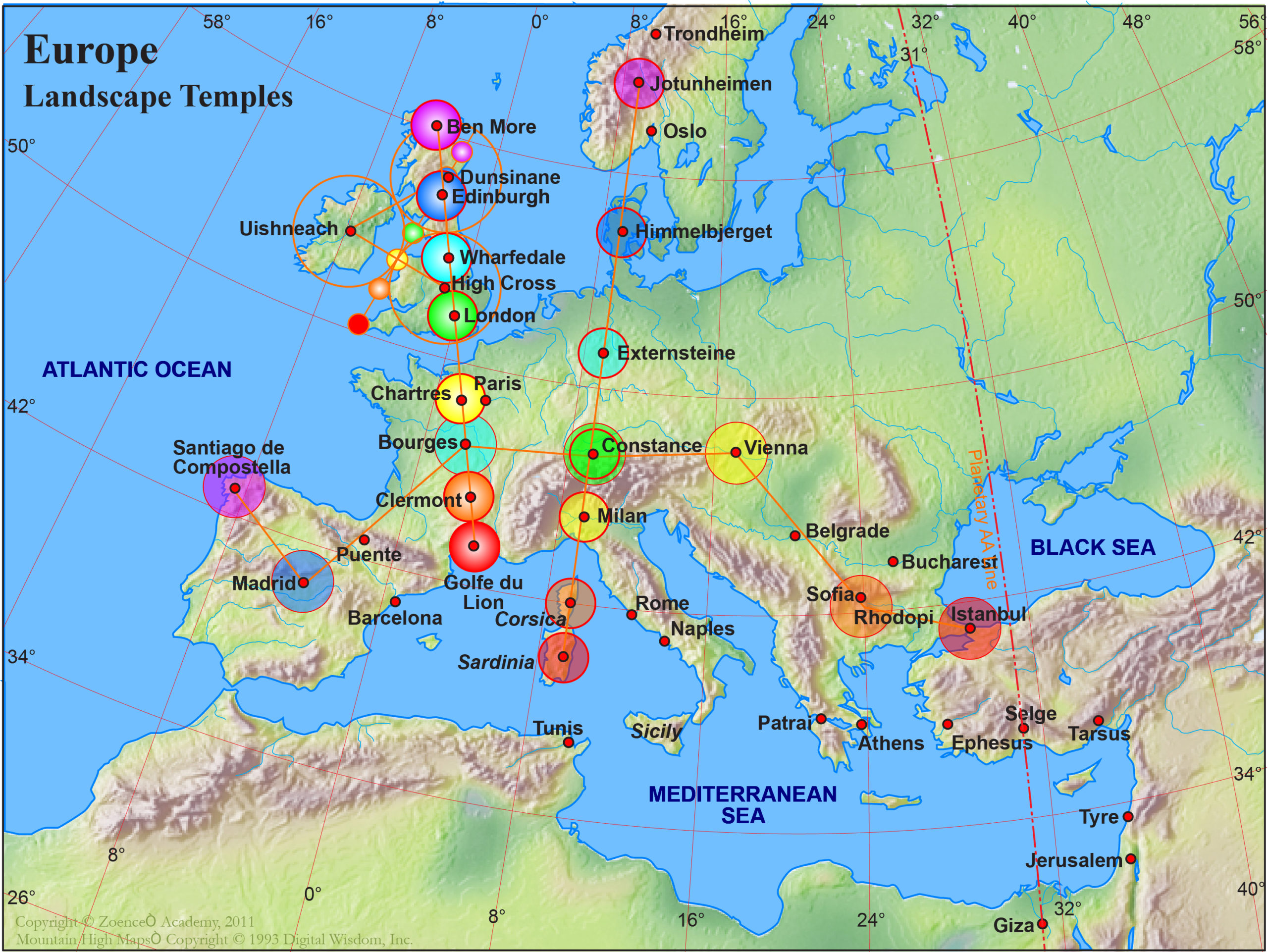 The continent of Europe is named after the classical myth of Europa and the Bull. In terms of the landscape, Europa is represented by the British Isles, the Bull by mainland Europe. Their child is known as Hermes or Mercury and is represented by what I call the ‘Grail Land’ – the landscape temple that stretches from north-west Scotland to the south of France. The head chakras of the Grail Land lie in Scotland, the throat and heart chakras in England, and the abdomen chakras in France. London is located in the very centre of the Grail Land’s heart chakra, marking the heart.

The Europa and Bull myth is a simplified version of the Dionysian myth, as taught in the mystery schools. In the Dionysian myth, Europa is Persephone, and the Bull is Zeus. Their child, when first born, is called Zagreus, and his symbolic appearance is as a bull-calf. This myth is paralleled by the Egyptian myth of Osiris, Isis and Horus, wherein the god Osiris is symbolised as a bull when incarnate on earth, the goddess Isis as a cow (heifer), and their son Horus as a bull-calf. However, in the classical versions of the myth, the incarnate goddess’ form was often interchangeable, as either a cow/heifer or a princess/queen. The description of the incarnate god as the king, however, was usually maintained as a bull. Hence in the Europa and Bull myth, the incarnate goddess Persephone is portrayed as the princess Europa, whilst the incarnate god Zeus is portrayed as a bull; but the bull is really Asterion, king of Crete (the story originates from Crete). The Dionysian mystery, however, dispenses with the incarnate forms of bull and cow for Zeus and Persephone, but it still portrays their child Zagreus as a bull-calf.

Now, the thing about Zeus and Persephone’s child is that he is destined to become Dionysus, the immortal-mortal or mortal-immortal, “son of man, Son of God”. When first born as Zagreus, he is a mixture of both, but the mortal aspect is not yet fully integrated and united with (i.e. transmuted into) the immortal aspect. What is called his heart, though, is that part of him which is truly good and has achieved a certain immortality as an immortal- mortal.

When Zagreus is attacked by the Titans, he transforms into several symbolic animal forms (some myths describe these as including a lion, a wild horse, a horned serpent, a tiger) culminating in that of a bull. It is as a bull that Zagreus is finally caught by the Titans, who tear Zagreus apart and devour all that which is still mortal, which has not been integrated and united with (i.e. transmuted into) the immortal aspect. As this happens, Athena intervenes and rescues Zagreus’ heart and gives it a new form, raising it up to the highest heaven where he becomes Dionysus, ‘Son of God’.

Jesus was the great exemplar of these mysteries, which underlie the Hebraic mysteries as brought from Chaldea by Abraham and Sarah. The extra thing about Jesus is that he transmuted even his physical body as well as his mortal psyche into an immortal form, which Mary Magdalene and the disciples witnessed, and then ascended to heaven in his ever-expanding light body.

Orpheus was the predecessor of Jesus. He renovated the Dionysian mysteries and was himself regarded as an incarnation of Dionysus: thus he had to go through the initiations as a Zagreus; then, after being caught and torn to pieces by the Maenads (the Ciconian women), he ascended to heaven as the Swan (represented in the sky by the constellation Cygnus, also known as the Northern Cross). However, Orpheus’ transmutation was not as complete as that of Jesus. In Orpheus’ case, his head, still singing mournful songs and accompanied by his lyre, floated down the River Hebrus into the sea, after which the winds and waves carried them to the island of Lesbos; whilst the fragments of his body were gathered up by the Muses, who buried them at Leibethra below Mount Olympus, where the nightingales sang over his grave.

A key to all this is that the body of Zagreus is not the same as the body of Dionysus. The former is part-mortal, part-immortal, and symbolised as a bull. The latter is immortal- mortal, wherein the mortal aspect has become immortalised and one with the immortal aspect, which is symbolised as a swan. The bull is an earthy, earth-bound creature, but the swan can walk on the earth, swim in the water and fly in the air.

The Grail Land, on the other hand, is representative of Zagreus, and this is even now being attacked by the Titans and torn to pieces. In fact, the process began some time ago, and during all that while we were doing things that represented Athena rescuing the heart truths of Zagreus (the Grail Land) and building them into the Swan on mainland Europe.

As for Europa/Persephone (the British Isles), her form is consumed in fire, because she has demanded to see Zeus in all his glory. At the higher level of meaning, this fire is the fire of love, of passion for the divine. At the lower levels of meaning, it is a purifying and destructive fire. The immolation of the phoenix represents this perfectly – and the phoenix eventually rises reborn from its own ashes.

The goddess of Britain (and originally of the whole British Isles) is Britannia, who is none other than Athena. She is not the same as the goddess Persephone, who is queen of the underworld and goddess of the fertility of nature. Athena (Britannia) and Persephone are two goddesses equated with the British Isles. There must be a third, forming the Triple Goddess, which the Three Lands (Scotland, Ireland, Britain) of the British Isles represent. The famous description of the Triple Goddess is as maiden, mother and crone – three aspects in one being.

Interestingly, Dionysus is considered to be equivalent to Apollo, and Apollo’s partner is Athena.