Teachings for These Times in Relation to 21st December, 2020
By Peter Dawkins 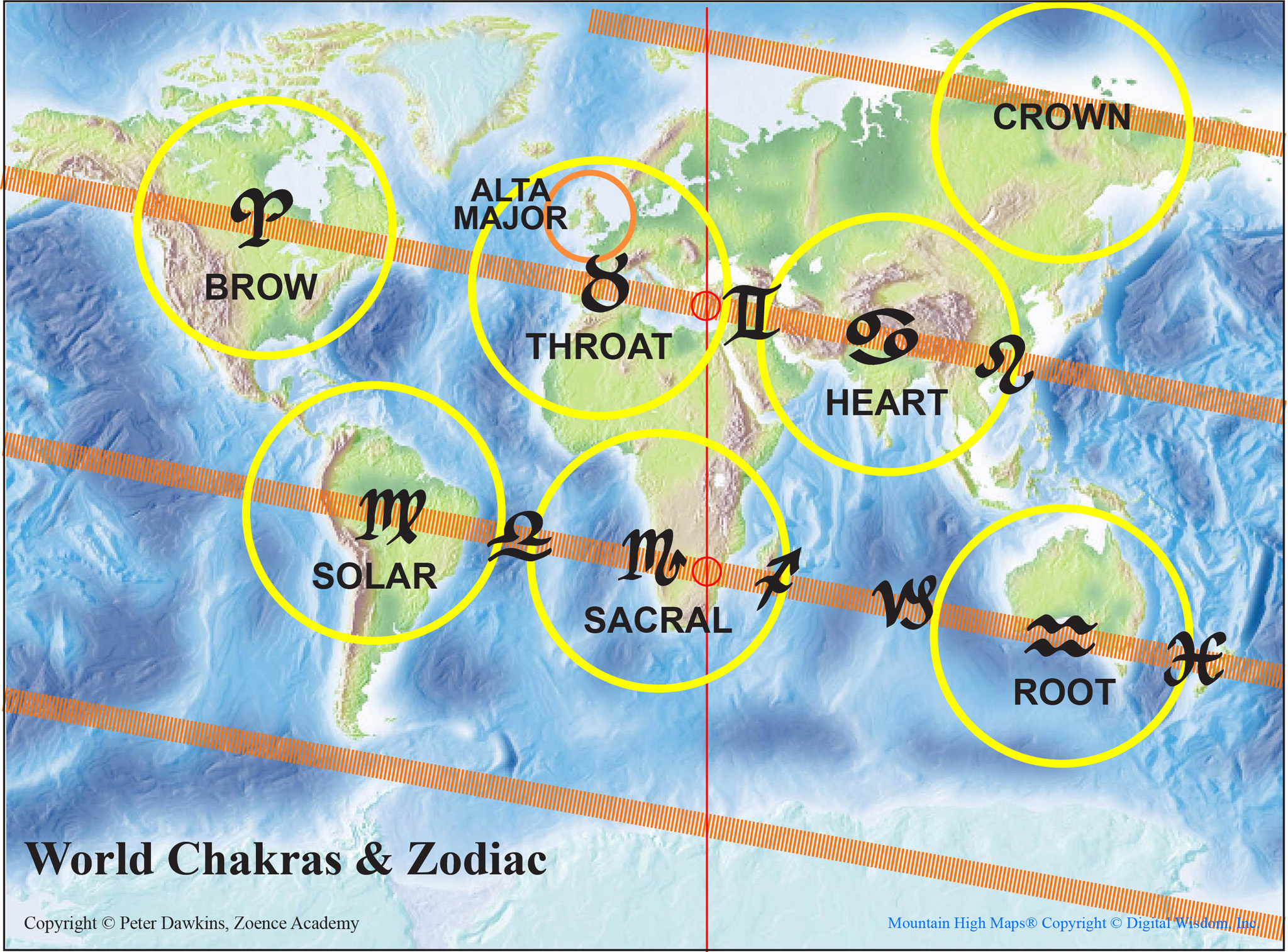 Uluru, in the centre of Australia, is a brilliant natural symbol of Shiva’s lingam which lies within the root chakra, encircled three and a half times by the serpent-goddess Kundalini. When suitably aroused, she then rises upwards through the other chakras. Many years ago I was informed that the Australian aborigines see Uluru as being encircled by a great serpent, which was one of the things that helped to confirm for me the original vision I was given of the Planetary Dragon (which I saw encircling the world three and a half times).
Zoence | World Temple landscape temples 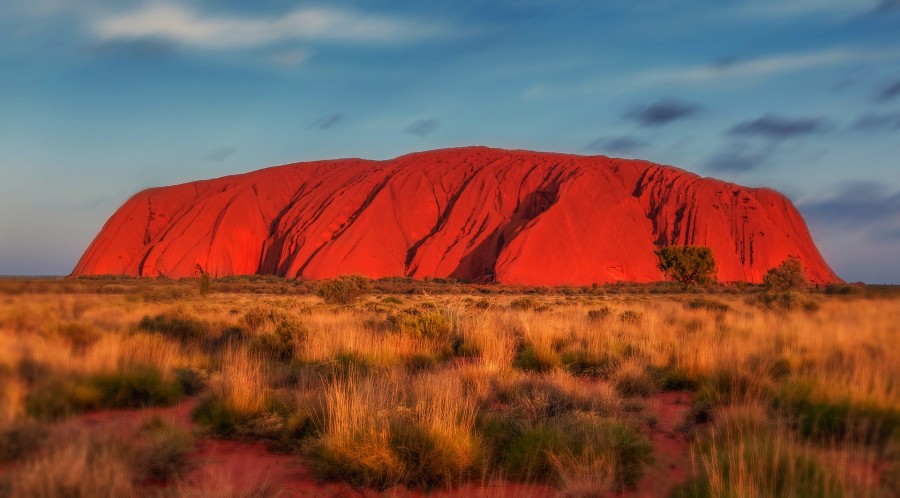 The actual prophecy of the aboriginal elders is a little vague, intensely wrapped in metaphors, but the message seems to match prophecies given by Jesus, Beinsa Deunov and Babaji, and also matches my very first great vision given to me in the early 70’s, of a sudden great flash of light that caused a seemingly sudden separation of the good from the not-so- good, with the good remaining on earth whilst the not-so-good were removed somehow to other places. My latest understanding, however, is that this separation will take place during 12 years of Herculean labours (2020-2031), during which mankind will be greatly tested, so as to purge the world of such things as greed, arrogance, pride, selfishness, etc.., and thereby leave truly good-hearted people on earth who are capable of both building and living in a golden age.

I see this as the arousal and rising up of the planetary kundalini, with the first labour being focused on the root chakra, which provides the basic will to survive (on earth). So the test has appeared in the form of the covid virus, threatening human survival and bringing out the best in people who are good-hearted and willing to help others.

Next year the labour will concern the sacral chakra. Gradually, therefore, souls will be sorted out. Some are already proven good-hearted; some will become so; some will refuse to be so and will remain stone-hearted or worse. It is the latter who will have failed the test. And so it will go on. When the souls who have not passed the test or tests die, they will not be allowed to reincarnate in this world. Those who will be allowed to reincarnate on earth, and thereby be involved with creating a golden age, will be those who are able to pass all the tests, all twelve of the labours.

This sounds huge, but I think it is the tests that involve the first three chakras that are the key ones. Once we reach the heart labours (two of them), the worst is likely to have been passed. In fact, I was told two years ago to celebrate at midsummer 2021 as “the worst will be over”. I still believe this, although now one could interpret this as just referring to the coronavirus pandemic – but who knows? It could be referring to something stupendous that could occur on 21 December this year, at the culmination of the first Herculean labour. If enough of humanity have passed the test, then the planetary kundalini will have been sufficiently aroused and will start rise up the chakras. This must be a major thing. The kundalini is only aroused by labours of love, and will support and enable such labours. In such a way, I believe, power will be gradually and steadily passed from the evil- doers to the good-doers, who will grow in strength and power as a result.

The Jupiter and Saturn conjunction of the 21st December brings opportunity. Its association in Kabbalah is with Mercy (Sephira 4), whilst Saturn is equated with the unnumbered Sephira, Knowledge (i.e. knowledge of truth, which is illumination). That is why the conjunctions of Saturn and Jupiter, which occur approximately every 20 years, are so special. When they are extremely close, as they will be on 21 December this year, the conjunction is extra-special. The last such close conjunction was in 1623, but couldn’t be seen as it was too near to the sun to be seen. The previous close conjunction of Saturn and Jupiter that could be seen was 800 years ago. 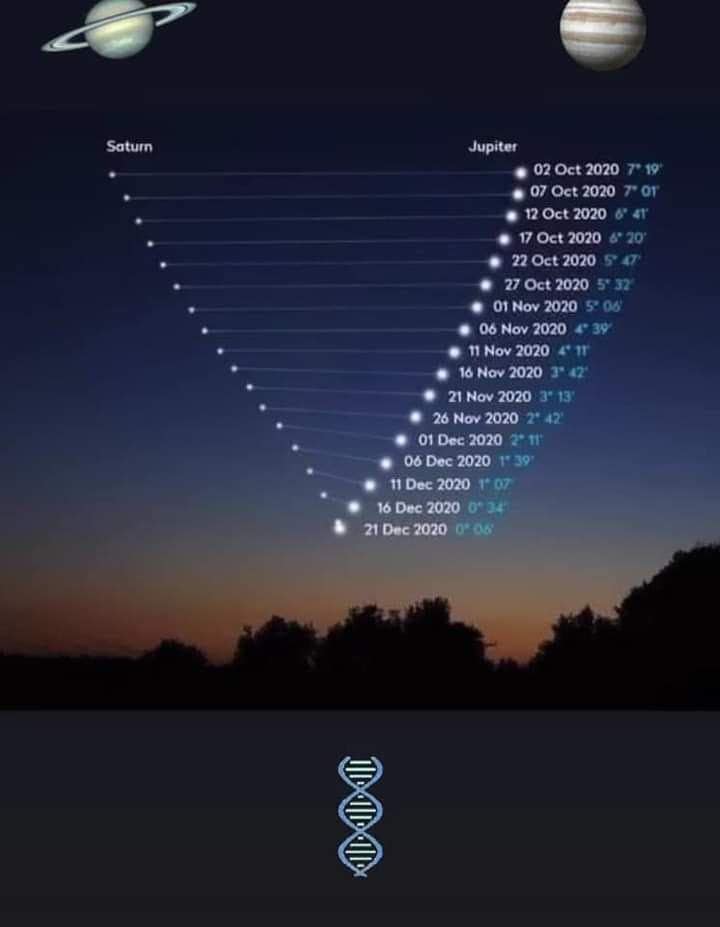 What is called a Great Conjunction is when Saturn, Jupiter and Mars are conjunct, although the term is also used for the conjunction of Saturn and Jupiter only. The Saturn-Jupiter-Mars conjunction is very rare, but one did take place in 1603-4. I have written about it in my ‘Elias the Artist’ paper: - (https://www.fbrt.org.uk/wp-content/uploads/2020/06/Elias_the_Artist.pdf).

Here is an extract: -

In 1603-4 a great conjunction of Saturn, Jupiter and Mars took place in the sign of Sagittarius and close to the Galactic Centre. (A great conjunction or conjunctio magna is a conjunction of Saturn and Jupiter which lasts long enough for Mars, the third of the major planets, to approach closely the other two planets, thereby producing the very conspicuous spectacle of three bright stars shining from the same place in the heavens.) In alchemical lore, a conjunction of Saturn, Jupiter and Mars produces enlightenment—Saturn signifying deep thought which on its own is serious and melancholic, Jupiter signifying compassion and joviality, and Mars signifying the vital strength, discipline and determination necessary to rise to the heights of consciousness. The three represent the upper triangle of the “Lesser Adam” (also known as Microprosophus or Zauir Anpin) in the cabalistic Tree of Life—the triangle of higher human consciousness. In rabbinic and kabbalistic tradition it is said that such a conjunction indicates an appearance (of some kind) of the Messiah; and, if it includes a double or triple conjunction of Saturn and Jupiter, then the messianic appearance or manifestation is significantly stronger. If the conjunction takes place in Pisces, then the manifestation will be the ‘Fish Saviour’ aspect of the Messiah, such as occurred in respect of Jesus of Nazareth. If the conjunction occurs in another sign, the manifestation will relate to the symbolism of that sign.

This great conjunction was astrologically important because it took place in a constellation (Sagittarius) that is one of the three signs of the Fiery Trigon, with the Saturn-Jupiter conjunction of 1603 followed by the triangular grouping (or massing) of Saturn, Jupiter and Mars in Sagittarius in 1604, thereby producing a fiery triangle (i.e. of the three fiery planets) in the Fiery Trigon.

However, what gave this great conjunction additional significance was the fact that it took place together with two “new stars”—a nova in the constellation of Cygnus (the Swan) that was first sighted in 1600 and still shining strongly in 1603-4, and a supernova in the constellation of Ophiuchus-Serpentarius (the Serpent Master) in 1604. The latter (Supernova SN 1604) was observed by Kepler and thus became referred to as “Kepler’s Star”. It was described as being blood-red in colour and appeared between Saturn and Jupiter, in the “right foot” of the “Serpent-Handler” Ophiuchus. Its exact position was in the leg of Ophiuchus at the apex of a tight triangle with Saturn and Mars-conjunct- Jupiter at the base. It was bright enough to be seen during the day for over three weeks and outshone all the stars and planets except Venus in the night sky. It continued to dominate the night sky for 17 months, after which it faded away. “Kepler’s Star” was the last supernova observed in our galaxy up to the present date.

One thought on “Teachings for These Times in Relation to 21st December, 2020”