The town of Leek, known in Staffordshire as the ‘Queen of the Moorlands’, lies on the eastern fringes of the Peak District just north of the Potteries. The place name itself indicates water and there are springs and wells dotted around the district. In terms of the landscape zodiac Leek falls in the sign of Gemini.

It can be said that the town has a strange duality for out of the remnants of Georgian and Victorian textile manufacturing and heavy industry there was and still remains a reputation for the creative arts. William Morris and his arts and crafts movement chums visited and left their mark in the area. 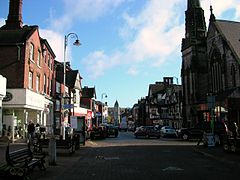 Morris in particular befriended a prolific local architect, Larner Sugden, around the time he began the society for the protection of ancient buildings in 1877. Consequently, this influenced Sugden to conserve the surrounding character whilst constructing his new edifices. As a result Leek has a variety of architectural styles from across the ages within a small radius especially in the areas close by the market place and the parish church, St Edwards.

Behind the parish church and in an area known as Silverlands, a unique phenomenon between sky and land could be viewed from ground level until trees began to obscure the event. This is the double sunset, where the sun drops behind Bosley Cloud, a hill about 6 miles away to the south west, only to reappear from its slope and set down into the land again. This happens during the turning of Gemini to Cancer the midsummer solstice. An antiquarian Dr Robert Plot first described the sun’s occultation with the Cloud in 1686 and calculated that it would have been visible for many centuries. http://www.mikeoates.org/mas/leek/sunset.htm (Although from the present there’s roughly less than 500 years to go until the sunset goes solo). Today the best position to view is from the church tower and, of course, visibility is subject to our great British weather.

Because of this distinctive spectacle it seems obvious that the parish church of St Edward the Confessor was positioned on an earlier pagan site but sadly because a graveyard is for the purpose of burial it is impossible to have an archaeological dig to prove it. The existing building echoes the double sunset in its architecture in that it possesses 2 rose windows which are diametrically opposed north and south. They date from the 1300’s and were restored in the 1860’s. We can only guess what was portrayed in the original glass. Within the church yard itself there are crosses which were there long before a foundation stone was laid and blessed. They display knotwork of Saxon and Norse influence and dowsers will tell you there are strong telluric forces at play within the vicinity.

One thought on “The Full Moon in Gemini – Leek”