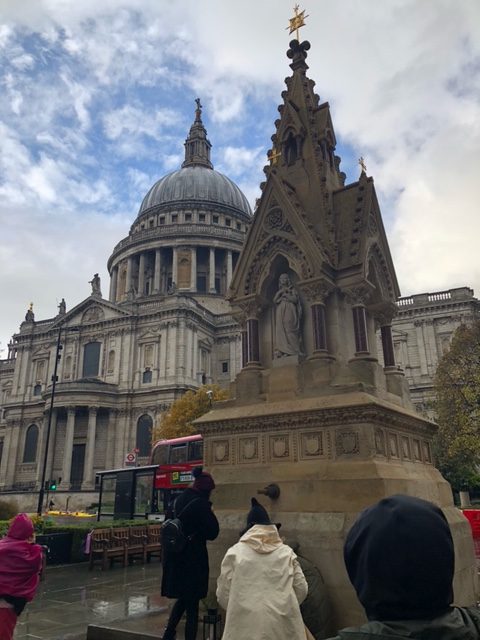 A small group of slightly apprehensive pilgrims and a black Labrador called Oscar arrived at the rendezvous point in the shadow of St Paul’s Cathedral across the road from an art installation of 40 golden angels swinging in the afternoon breeze. Roberta, our Group Leader, winked, calling them our ‘luminous beings’ who will accompany us on our pilgrimage. She explained that Samhain was traditionally a time of endings, as the Celtic Year ran from the 1st November and that she had rose petals that could be thrown into the Thames at the end of our walk to symbolise ‘letting go’ of the things we no longer wish to take forward into the New Year. We were shown a map created by Phyllis of the route along the Path of the Dragon showing the main Celtic Axial Road. 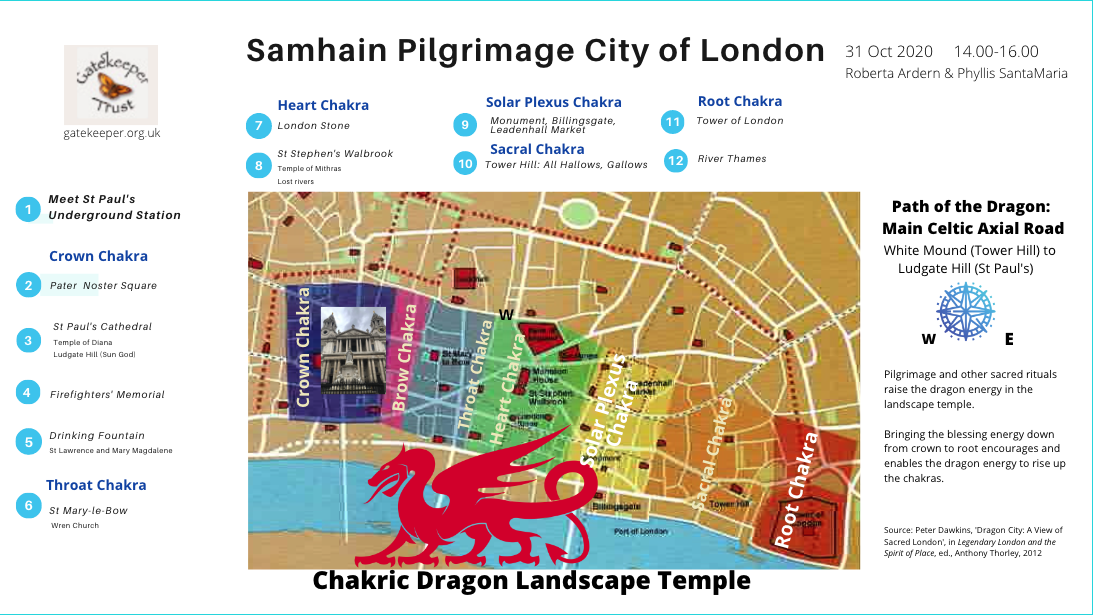 We walked the route honouring the sacred energies in the landscape temple, from the Crown Chakra (St Pauls) to the Root Chakra (Tower of London). At the time of the blue moon, 14.49 pm., we were gathered around the Firefighters’ memorial remembering those who had lost their lives saving London in WW2.

Pausing at Wallbrook, we talked about lost rivers and the nearby Temple of Mithras and contemplated the heart--based work of Chad Varah, founder of the Samaritans which he started at St Stephens, Walbrook in 1953. 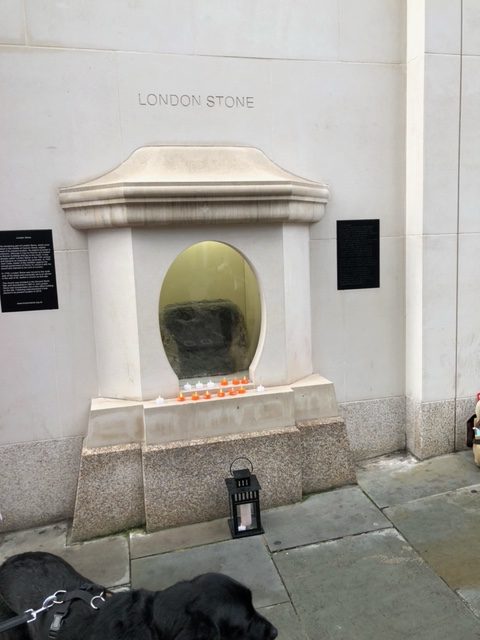 We then walked to the London Stone, located opposite Cannon Street Station (in the Heart Chakra). Passing the Monument (Solar Plexus) we remembered the Great Fire of London that helped cleanse London after the Plague. We reached the Sacral Chakra and gathered at the site of ancient gallows. We then made the short walk to The Tower of London (Root Chakra) where we scattered the petals in the Thames shortly before sunset and said our thanks and goodbyes.

Samhain comes at the end of harvest, before winter, the time of hibernation. There had been notable absence of the usual hustle and bustle of vibrant city life and the end of our pilgrimage coincided with the announcement of a National Lockdown later in the week, when the already quiet streets would become quieter still.

Using Eventbrite to advertise and allow people to book our Samhain Pilgrimage was a very good decision as it attracted a younger clientele most of whom had not heard of the Gatekeeper Trust. It also meant we knew the names and phone numbers of the people who had booked so when we met, we could greet them by name. I asked everyone where they had heard about the event and most of them had googled Samhain – events and were attracted by what they had read about the walk.

So, on a rather stormy Saturday afternoon 31st October 2020, a group of us gathered in the shadow of St Paul’s Cathedral, with a black Labrador called Oscar. After personal introductions, an introduction to the Pilgrimage, the setting of intentions and most importantly a Health and Safety briefing and the prayer Kindly Luminous Beings, we set off to our first stop in Paternoster Square. 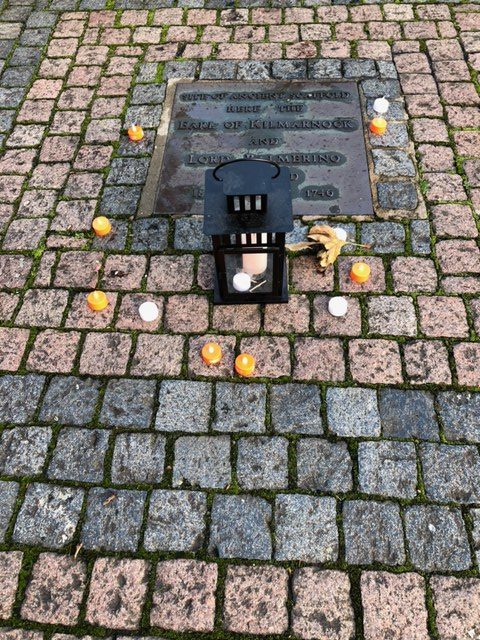 At each stop we tuned in to the different energies and thought about the significance of what we were looking at. I had brought along candles, battery operated tea lights, and rose petals. We tried to light the candles at three stops – the Drinking Fountain dedicated to St Laurence and Mary Magdalene, the London Stone and the site of the Gallows at Tower Hill – unfortunately because of the wind and rain this proved impossible so the battery- operated tea lights were used instead.

(Photo) Lantern and lights at the Gallows where 125 were hung, including martyrs

We finished by the Thames close to the Tower of London where we all threw rose petals into the River signifying the things we wished to discard on this the last day of the Old Year, and then repeated the prayer ‘Kindly Luminous Beings’ before saying our goodbyes. I told everyone about the Pilgrimages planned for Imbolc, Beltane and Lammas and Phyllis explained about the Sagittarius Pilgrimage in London part of the Wheel of Life.

One thought on “City of London Samhain Pilgrimage Report”