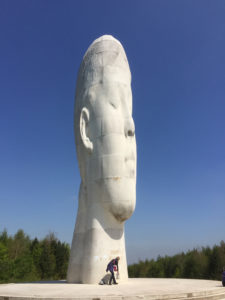 The constellation of Taurus has been recognised from the very earliest days of archaic astronomy dating back over 5000 years. It may have been the very first recognised constellation because at that time it marked the beginning of the year at the point of the spring sun. There are many references to the constellation and to its main stars and star clusters in classic literature deriving from the myth of Zeus and Europa, with Zeus appearing as a white bull and carrying Europa away over the sea.

In our current period, Taurus appears largely as a winter constellation being due south (and at its highest point in the night sky) at the end of December. It can easily be found above and to the right of Orion- the three stars forming Orion's belt point to the star cluster Pleiades, via a reddish star which is Aldebaran, the principal star in Taurus. Aldebaran itself is found amongst another star cluster, the Hyades. Confusingly, the constellation itself is represented as only the head, shoulders and forelegs of a bull - the Pleiades are at the heart of the bull, Aldebaran is the eye, and the Hyades are the head. It is also facing backwards making life extremely confusing! Zodiac constellations move from left to right in the night sky so Taurus effectively reverses across the sky.

Taurus is bounded to the right by the constellation Aries and on the left by Gemini. The boundaries (or cusps) of these constellations are important markers in the British landscape zodiac. The boundary between Aries and Taurus lies along a line joining High Cross (the sacred Heart of Britain) with Uishneagh the sacred heart of Ireland. In the landscape, the boundary is marked by a group of hills near to Llangollen known as the Seven Sisters which is Pleiades, the heart of the Bull.

The boundary between Taurus and Gemini is particularly significant as it marks one of the fixed points in the night sky. The boundary is crossed by the galactic meridian (the effective centre line of the Milky Way in the night sky) and the point at which they cross is thus one of the AA points forming the primary axis of the landscape zodiac. The corresponding point on the primary axis is on the boundary between Sagittarius and Scorpio. For our purposes the boundary between Taurus and Gemini and the AA point is marked in the landscape by Dream, (photo), a sculpture inspired by light emerging from Earth. The story behind how it came to be built is fascinating – “From Wasteland to Woodland” http://dreamsthelens.com/

For more information about the inspiration for, and the development of, The British Landscape Zodiac please refer to https://www.zoence.co.uk/info-landscape/British_Landscape_Zodiac_v2.pdf

Mike and Vivienne Newton are the Local Contacts for Taurus and the North West of England
Tel: 0161 449 5299
vnewton5@virginmedia.com mnewton998@virginmedia.com