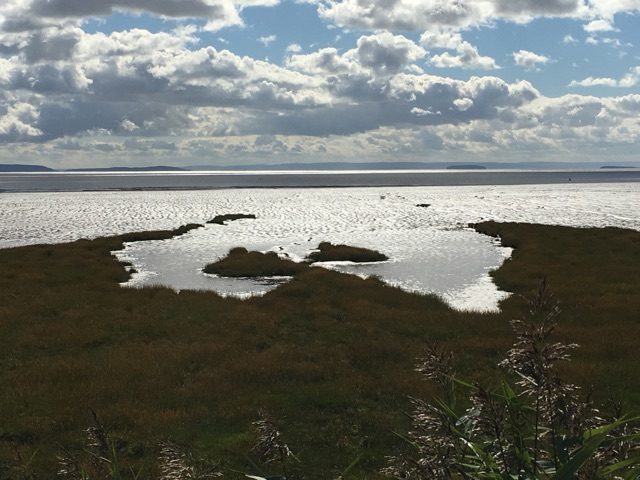 Photo: Near the mouth of the Usk, at the Gwent levels, looking across to Somerset

I was introduced to the Wheel of Life pilgrimages back in 2017 when Jane Embleton and I worked with the energies of Heiros Gamos on either side of the Severn River during the time of Pisces, an extraordinary tale for another time. Since then the pilgrimage work has developed on the Somerset side with the River Tone and on the ‘Welsh’ side with the River Usk. What is interesting is that the rivers mirror each other, both beginning on high ground in national parks then running eastwards with their mouths opening into the Bristol Channel (the Tone via the River Parrett) on a north/south axis.

The energies of a river can be variable in the extreme and in the case of the Usk we have found that trying to navigate it for a pilgrimage has been ‘sticky'...yet also rewarding. The River Usk falls in the Pisces segment of the Wheel of Life and Pisces is the last segment of the zodiac . . . the place of the unconscious, illusions and dreams . . . and a water sign with two fishes swimming in opposing directions. We have chosen to walk its length going upstream which may explain, to some extent, why the River Usk has been so tricky to pilgrimage along, although it also highlights the opposing reality/illusion dynamic of the sign of Pisces.

I’m also intrigued by being the local contact in this area . . . Pisces energy is an ending energy, or a 'final stages' energy and my astrological signatures are on the cusp of the twelfth and first houses, as is the energy of the moon phase I was born under, the cusp of the balsamic (final quarter) and new moon. As I write this piece the moon is in that last phase from balsamic to new, the darkest depths of release before the first glimmerings of the new cycle. And that is how the River Usk feels, full of the potential of all that has been realised in a cycle ready for its’ reincarnation into the next. To put it succinctly, I seem to have unconsciously chosen to live in the very ‘land' aspect of the Wheel of Life that reflects, as do waters and in this case rivers, my own astrology.

Our initial exploration of the river Usk, at the town of Usk, began with a journey across the Bristol Channel on the new Severn bridge coming from Somerset into Wales. As we approached the bridge there was a big black cloud with a sliver of rainbow to one side. As we got closer the rainbow extended across the bridge and as we drove over, became two rainbows, one of which touched the car whilst we were on the middle of the bridge. A welcoming omen! 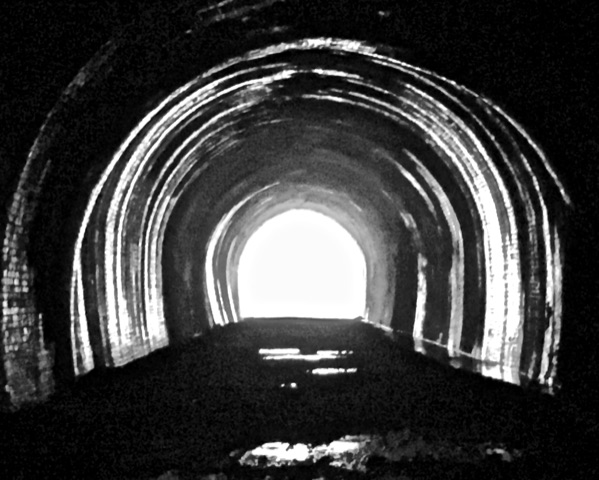 We started the main pilgrimage in 2018 when a small group initially met in Usk Town to explore the origin of the name of the river. We pilgrimaged around the town starting at the Usk Museum for Rural Life, (fascinating), then through a disused and very long dripping railway tunnel (the dark aspect of Pisces), coming to the most lovely castle with free range chickens where we had lunch (the approach to the promise of light), back down the river where we watched goosanders/mergansers fishing in the water, diving in and out, and then to the working prison of Usk, a dark and strange place that seems to live in the unconscious of un-evolved fantasies and phantasmographies (I’m not sure this word exists but seems to fit).

We later found out that the prison houses many sex offenders, convicted police officers and ranking civil workers. That February day was icy cold and despite a good start the river felt a bit neglected, as if no one had taken the trouble to see what it had to say - which may have gone something like this - “You’ve chosen this beautiful valley, place and space, to house the most troubled and challenging archetypes of your society”. 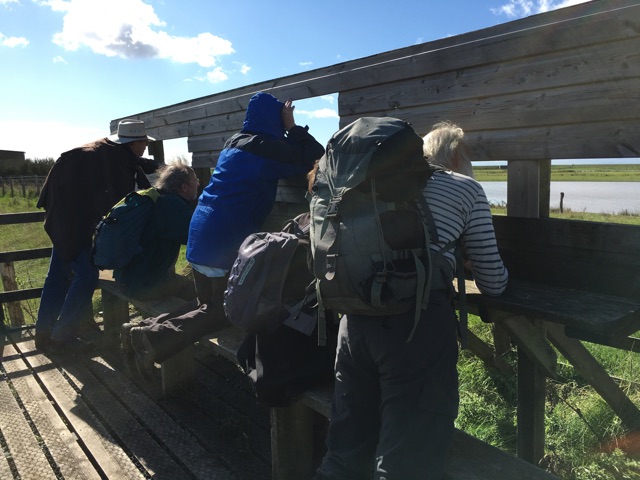 Having gained some sort of grounding in an otherwise watery expedition, our next leg began at the mouth of the Usk at a place called Goldcliff Priory on a small knoll by the sea, the soil being a yellowy gold colour. Our intention was to take the energies of the Bristol Channel and sea upstream to help clear any blockages therewith . . . and perhaps going upstream may have been a reason for the difficulties we have encountered. We walked along by the sea until turning into the National Nature Reserve of Gwent levels that is run by the RSPB. (Photo). The levels mirror the Somerset levels . . . and were, at the time, under threat (and I think still are to some extent) from an M4 motorway expansion into Newport itself. 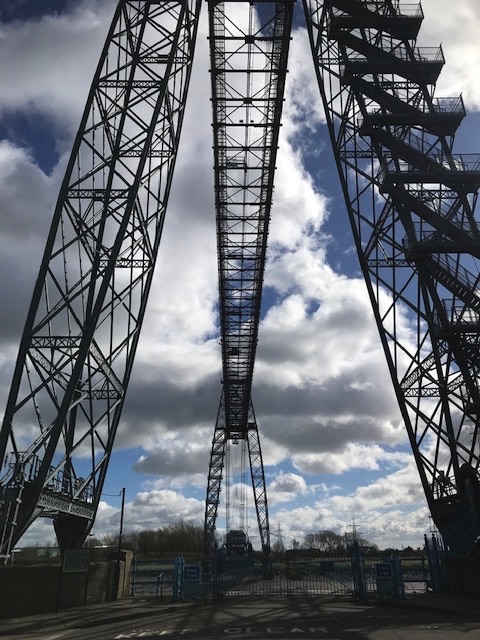 These levels are a rare landscape, both historically and naturally, but a little while later and following our pilgrimage, the plans were dropped - we think that the pilgrimage helped with that! Continuing on we walked through an eerie and almost empty industrial landscape (although many expressed quite liking it!) before ending up by the Transporter Bridge in Newport, an extraordinary structure that takes cars and people across the river in a giant swing, back and forth like the very sign of the two fishes of Pisces. (Photo)

On the way home, eastward bound towards the Forest of Dean, a rainbow grew out of the Usk Valley and planted itself in the Severn - it felt like the River Usk was saying ‘thank you’ for taking notice.

The next leg was from Newport to Caerleon. For every leg of a river pilgrimage we do a reconnaissance in order to find the best route for those who wish to join us on the ‘real’ pilgrimage and this particular stretch of river was really tricky. We started from the Transporter Bridge and got into a residential area in Newport when we realised that we had left the car keys we needed at the other end in the car, so one of us had to scoot back to retrieve them. The route was very built up with little greenery to be found, and once in Newport the river was contained by girders of various materials and spanned by many bridges. It was hard going walking on so much pavement and once we had got out the other side near to the M4 itself we then had to go under the motorway, (photo), and alongside it . . . a dismal and dirty path with dog poo bags littering the bushes and trees and a sludgy dark and muddy footpath. 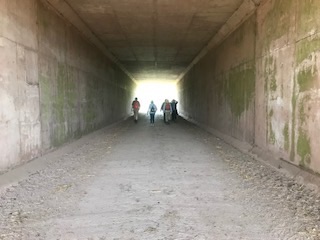 We got out into a built-up area, home to the dogs no doubt, and were spun round and about until we found where there ‘should’ have been a path. We ended up in someone’s garden and they let us climb their fence into an old vehicle yard which felt very unfriendly and almost dangerous. We came out on the busy road from Newport to Caerleon and as there wasn’t any further access to the river, we trundled on to Caerleon on the road.

This particular stretch felt decidedly sticky and hard work - the forgotten car keys, the girdered and concreted containment of the river, the many bridges, the obstacles of housing labyrinths and motorway sidings, the long trudge along a busy road. We decided that we had pushed through a lot of the sticky energy of this stretch of river and that maybe this highlighted the illusory quality of water - things are not always as they seem. To ask others to go through that would maybe have put them off coming along on the further stretches and we left it at that, hoping that our actions were enough to clear a ‘way’ for others in the future (another Piscean trait).

The most recent leg was April 2019. Our reconnaissance was sticky and tricky again, with poorly kept agricultural land being the worst of it . . . from Caerleon to Newbridge-on-Usk. The stretch from Newbridge-on-Usk to Usk was better, or maybe 'more flowing'. It was very hot and sticky again and far too long for a whole group to attempt . . . so we decided that it would be best if we rendezvous in Caerleon then walk from Newbridge-on-Usk to Usk. Our group of pilgrims was full of positive ‘pushing’ energy which I think helped . . . we had to walk under the motorway twice veering quite a way from the river but once we got closer the energy seemed to lift a little and we walked alongside it for quite a way before ending up back in Usk. Our party stretched out, a little more languidly, which I think feels more riverlike in the lower reaches of a river. I could say it felt like the river was ‘truer to itself’ here. 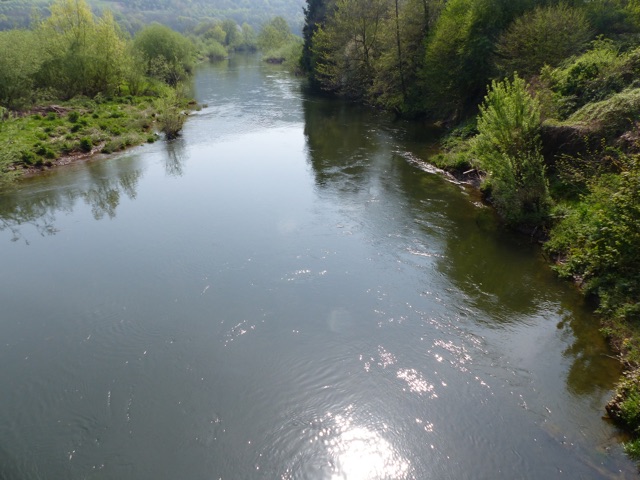 Since then we have tried to organise the next leg on several occasions but have experienced obstructions and delays. As I write we are planning to walk from the river from Usk to Clytha on the day the Sun enters Virgo in August 2020 a few weeks before the Piscean full moon, but have been hampered by August holidays, the fear of road traffic and people not being free.

This river is not happy in many places . . . but we hope that the going will be a little easier as we continue upstream and because of our work, those who follow behind us also have an easier time of it. That is the difficulty with aspects of the Pisces element of this piece of Britain, making an ending less complicated so that the new has unencumbered ground to colonise.